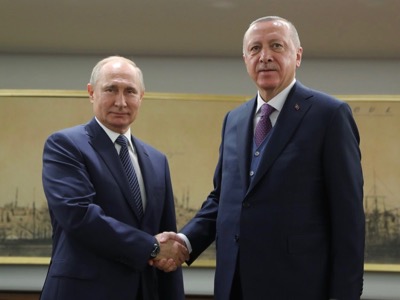 We, the Presidents of Turkey and Russia, have been developing constructive bilateral relations in a wide spectrum of areas on the basis of mutual respect. Today’s inauguration of the TurkStream natural gas pipeline, which we are realizing here in Istanbul, is a concrete example of this mutually beneficial relationship. We are pleased that our cooperation not only serves to enhance the interests of our two peoples but also contributes to addressing regional problems.

We are deeply concerned about the escalation of the tension between the U.S. and Iran as well as its negative repercussions on Iraq. We evaluate the U.S. air operation targeting the Commander of the Quds Force of the Iranian Revolutionary Guards Corps Qassem Soleimani and his entourage in Baghdad on 3 January 2020 as an act undermining security and stability in the region.

In light of the ballistic missile attacks by Iran against coalition military bases in Iraq on 8 January 2020, we believe that exchange of attacks and use of force by any party do not contribute to finding solutions to the complex problems in the Middle East, but rather would lead to a new cycle of instability and would eventually damage everyone’s interests. We have always been against foreign interventions, unilateral military actions and sectarian conflicts. In this vein, we express our commitment to de-escalate the existing tensions in the region and call on all parties to act with restraint as well as common sense and to prioritize diplomacy.

We reiterate our commitment to the preservation of the sovereignty, independence, political unity and territorial integrity of Syria.

We emphasize our determination to combat terrorism in all forms and manifestations and to disrupt separatist agendas in Syria; we reaffirm, in this regard, the importance of the full implementation of the Memorandum of 17 September 2018 and the Memorandum of 22 October 2019.

We underscore the necessity to establish calm in the Idlib de-escalation area by fully implementing all agreements on Idlib.

We commit to work within the Astana Mechanism towards finding a lasting political solution in line with UN Security Council Resolution 2254, and to support the Constitutional Committee.

We emphasize the need to increase humanitarian assistance to all Syrians without discrimination, politicization and preconditions.

We have been following with great concern the recent developments, particularly the intensified fighting around Tripoli, in long-suffering Libya. The worsening situation in Libya is undermining the security and stability of Libya’s wider neighborhood, the entire Mediterranean region, as well as the African continent, triggering irregular migration, further spread of weapons, terrorism and other criminal activities including illicit trafficking.

We reaffirm our strong commitment to the sovereignty, independence, territorial integrity and national unity of Libya. Lasting peace and stability in the country can only be achieved by a Libyan-led and Libyan-owned political process based on sincere and inclusive dialogue among Libyans. Seeking a military solution to the ongoing conflict in Libya only causes further suffering and deepens the divisions among Libyans. Securing an immediate ceasefire is the foremost priority to start an inclusive intra-Libyan political process under the UN auspices, based on the Libyan Political Agreement of 2015, UNSC Resolution 2259 and other relevant UNSC Resolutions.

We support the ongoing Berlin Process, which aims to create a conducive atmosphere to revitalize the UN-facilitated political process, and remind that the Process can yield tangible results, with the involvement and commitment of Libyans and neighboring countries.

Under the current critical circumstances and in the light of the objectives set forth in the relevant UNSC Resolutions, we have decided to take the initiative and, as intermediaries, call on all parties in Libya to stop hostilities as of 00.00 hours on 12 January, declare a sustainable ceasefire, supported by the necessary measures to be taken for stabilizing the situation on the ground and normalizing daily life in Tripoli and other cities, and immediately come together around a negotiating table with a view to putting an end to the sufferings of the Libyan people and bring back peace and prosperity to the country. We are confident that the Libyans can independently decide on the future of their homeland in the framework of a nationwide dialogue taking into account the interests of all its citizens without exception.