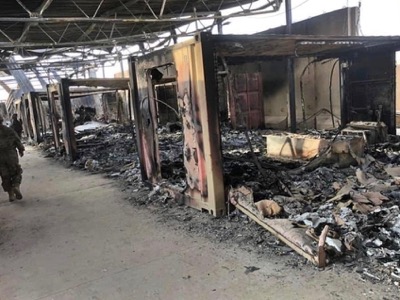 Further to our letter dated 6 January 2020 (S/2020/15) concerning the violation of the sovereignty of Iraq perpetrated by United States military forces on 3 January 2020, and on instructions from my Government, I am writing to inform you that Iraqi territory was violated yet again in the middle of the night of Wednesday, 8 January 2020 when Iranian missiles struck camps housing both Iraqi and international coalition forces. For Iraqi territory to be bombarded by the Islamic Republic of Iran on the pretext of self-defence under Article 51 of the Charter of the United Nations is unacceptable and constitutes a breach of the sovereignty of Iraq and a violation of the principles of good-neighbourliness, the Charter of the United Nations and international law.

We reiterate that Iraq has not and will not pose any threat to the security and safety of neighbouring States. Iraq resents being dragged into regional and international conflicts and having its territory turned into an open arena for the settling of scores. These acts and violations are flagrant provocations against the State, Government and people of Iraq, and are putting the peace, sovereignty, territorial integrity and social stability of Iraq at grave risk. They are turning Iraq into a theatre for a potential war that could be devastating to the region and the entire world.

Iraq calls on the international community to act to maintain the security, integrity and unity of its territory. It also calls on all the concerned parties to exercise self-restraint and work to reduce tensions in the region, avoid crises, and prevent a deterioration of the already fragile situation. It calls on the Security Council to condemn the disputing parties for their violations of the sovereignty of Iraq and the threat they are posing to its security and stability. My Government reiterates its willingness to cooperate with all neighbouring countries and the international community with a view to finding common ground and arriving at peaceful solutions to bring an end to those repeated violations.