Chad’s president Deby is on visit to Paris, officially to find new economic partners for developing his country’s oil resources, but unofficially and in reality his ruined country has already been sold. One proof of this is the receipt by Deby’s governing clan of around 30 years forward oil royalties. In addition, the seriously ill president was also on visit to Paris to negotiate his succession and the maintenance of power for his clan. 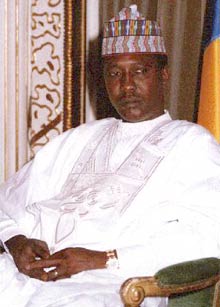 The president of the Republic of Chad, Idriss Deby, and several members of his government, arrived in Paris for a 4-day official visit. Other than the official reception this day at the Elysee Palace, the Chadian delegation was also slated to meet with France’s ministers of Foreign Affairs and Development cooperation concerning the financing of irrigation and water projects. The Deby delegation and its French official partners will lose no time in vaunting the business opportunities Chad offers, at a meeting hosted by MEDEF-International. The delegation has also stated its wish to end up with a visit to Poitiers where paleontologists study the remains of a seven million years old Hominidae. End of the official version.

In reality, president Deby slipped away from Paris for some days, following lengthy hospitalization in July and August at the city’s American hospital. Haggard by sickness, and also by his alcohol habit, it is increasingly unlikely that Deby will see out his mandate, and will have to activate his succession in the near-term. After arriving in the president’s seat following his ouster of Hissen Habre (his former boss), Idriss Deby maintained himself in power through terror, never shrinking from the use of massacres and exactions. In his early period of full power Deby could count on French support, but this in no way prevented him from blowing hot and cold with his Paris minders, and with time Deby showed himself as unable to defend his own interests as to tone down his regime’s notorious violence. Conscious that after his death his partisans would have no chance of winning free and fair elections, Idriss Deby is now attempting to lock-in control of the Chadian state by insiders of his clan, and the country’s rule by his handpicked successor. Over recent months, Deby has appointed members of his family at the head of all military and police forces, from the army, through the police, gendarmerie and the Republican Guard. He went on to set the new prime minister and heir apparent, in the shape of his own nephew, Moussa Faki Mahamat. This new and emerging power structure is the one Deby will present at the Elysee palace, and for which he will demand French support by way of existing defence agreements.

Chad has for some time aroused hopes among major oil companies. Significant oil reserves were first discovered by a US company, but the play was immediately complicated by the fact that oil bearing source rocks extend into Cameroon from Chad. To further complicate Chad’s oil development, there are probable or likely extensions of the source rocks into territory of the Central African Republic, and Libya, making each one of the 4 players able to access the oil, at least in theory. After long and complex negotiations an agreement was signed between the Chadian and Cameroonian consortiums to exploit the oil and ship it to the Kribi terminal in the south-east of Cameroon. Highly contradictory information circulates as to the exact details of the resource: according to some sources Chad would be veritable bonanza, holding up to 900 million barrels. Other sources however caution that producible quantities will be much smaller, and high cost transport to the Atlantic coast will seriously limit profitability for the operators. In other words the operating consortium comprising ExxonMobil, USA (40 %), Petronas, Malaysia (35 %) and Chevron Texaco, USA (25 %) have no sure win in prospect Another proof of this is the early and prudent retreat of Anglo-Dutch Shell, and of French controlled TotalFinaElf.

Despite this background, president Deby succeeded in winning huge loans from the World Bank, to finance the drilling of two thousands wells, and the construction of a 1070-kilometre pipeline through Cameroon. To limit project costs, Deby did not hesitate to ride roughshod over small farmers and ignore all engagements that his government made for environment protection. After five years of intensive oil related development, affected regions are now seriously deteriorated, with closed schools and local public services, and forced migration of certain population groups. During a press conference organized this week by the association Survie, the national assembly member and leading Deby opponent Ngarlejy Yorongar related how he had made representations to the World Bank to stop the disaster and had won agreement from the IBRD for it to send an inspection mission. According to M. Yorongar, the most recent activity of this mission was a visit to the villages of Miandoun, Ngalaba, Benbo and Maikeri to hear complaints by affected populations. On arrival at the airport, however, the head of the IBRD mission is said to have sought out M. Yorongar and to have purposed financing of his electoral campaign if he desisted in his demands for studies and missions that could hinder the fast development of Chad’s oil by the consortium [1].

Albeit contradictory, estimates for Chad’s oil wealth are high enough for Deby to have demanded, and received advance payments of oil royalties from the oil consortium. For Chad, which is one of Africa’s and the world’s poorest nations, these advance payments, and sumptuous loans from the IBRD have saddled the country with at least 30 years of extra debt.

In such conditions, we see no reason why France would rubber stamp the planned channeling of power by a cruel dictator who has ruined his country, and fattened profits for US and Malaysian oil corporations. Idriss Deby has of course not ignored the geopolitical arguments in his favour. The lifting of UN sanctions against Libya, and the installation by Chad’s armed forces of general François Bozize as the Central African Republic’s latest president reduce the freedom of action for French government strategists. Once again, therefore, French diplomacy will have to aid and support the unacceptable, because it chose to back the wrong horse, and found itself in high-stake geopolitical poker games as a small player. For the heads of MEDEF-International, their welcome to Deby gav them a nw opportunity to compromise themselves with a bloody dictator, but as for cutting oil deals with Deny they are far too late - Chad has already been sold.

[1] Interviewed by the Voltaire Network on these allegations, the World Bank told us it had never been informed of this claimed incident, and has no authority on the investigating panel, which is an independent verifying organism. The panel in fact has its headquarters in the offices of the World Bank