The networks of "democratic" interference

In his 2004 State of the Union speech, President Bush announced his intentions to double the budget for the National Endowment for Democracy (NED). This organization was created by Ronald Reagan to extend the CIA’s secret activities by providing financial support and controlling trade unions, associations and political parties. The NED boasts about having directed and manipulated the Polish trade union Solidarnosc, the Charter 77 and many other groups. Under the direction of the State Department and associated with the Republican and Democratic parties, with the board of trustees and with trade unions, the NED has found many individual and institutional "boosters" all over the world, including in France. 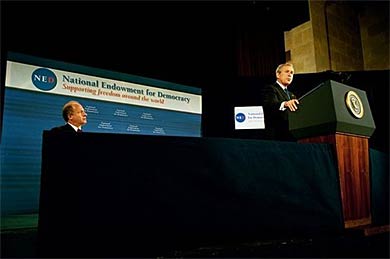 During his last State of the Union speech, on January 20th, 2004, President Bush announced that he would double the budget for the National Endowment for Democracy (NED) and that its «new tasks would focus on the promotion of free elections, free exchange, freedom of press and trade union freedom in the Middle East». For the White House, it is all about complementing its military actions in the region with an ever increasing interference with the domestic affairs of certain countries.

Early in the 1980s, President Ronald Reagan stigmatized the Soviet Union as the «Empire of Evil» and conceived new ways to fight it. Then, an ambitious endeavor of destabilization through the mobilization of the "civil society" was added to the military and diplomatic "restraint". After the CIA’s secret activities were disclosed by a series of investigation commissions and condemned by the public opinion, the National Security Council decided to continue its work with less dirty methods and under another name. Above all, the new structure had to be protected from political alternation through a bi-partisan direction.

Officially created on November 6th, 1982, the National Endowment for Democracy (NED) has a legal status as a non-profit association. However, its budget is approved by Congress as part of the State Department’s appropriations for the US Agency for International Development (USAID). In order to make it look like a private organization, the NED also receives donations from three associations that, at the same time, are indirectly financed by federal contracts: the Smith Richardson Foundation, the John M. Olin Foundation and the Lynde and Harry Bradley Foundation. 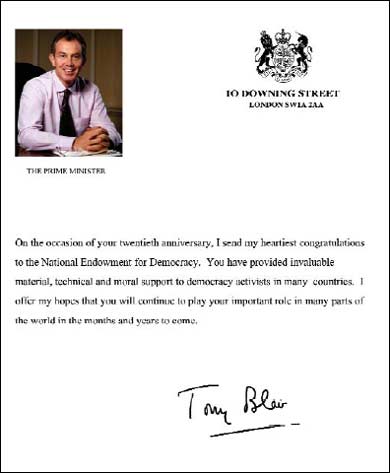 Most of the historic figures involved in the CIA’s covert actions have, at some point, been members of the NED’s Administrative Council or of its board of directors; among them Otto Reich, John Negroponte, Henry Cisneros or Elliot Abrams. Currently, it is presided over by Vin Weber, former Republican congressman from the state of Minnesota, founder of the ultraconservative Empower America association and fundraiser for the presidential campaign of George W. Bush in the year 2000. Its executive director is Carl Geshman, a former Trotskyite that became the person responsible for the US Social Democrats and a member of the neo-conservative trend [1].

The NED is simply the continuation of the CIA’s covert actions through other means, and that is why the United Kingdom and Australia associate themselves to its activities from the top in virtue of the agreement that determines the relations between their military secret services.

The NED’s main principle is that "What is good for America is good for the world". The funds are consequently managed by an Administrative Council in which the Republican Party, the Democratic Party, the US Chamber of Commerce and the AFL-CIO trade union are represented. Each of them suggests actions that have to be accepted by two thirds of the membership.

After the money is earmarked, it goes through institutes controlled by any of the members. In practice, with this process the NED determines which are the countries that will become targets of its actions, where it will finance parties and social partners to overthrow governments and put people in power depending on "the interest of America" and not according to the interests of any of its members.

Although it was created to combat communism, it was precisely after the collapse of the Soviet Union that the NED started to enjoy better health. While it pretends to be engaged in the promotion of democracy, it actually subjugates countries where it reproduces the contradictory interests of the American ruling class.

From this point of view, the NED is probably the one responsible for the crisis of democracies around the world: it has not stopped falsifying institutional mechanisms and assimilating democracy into a "good administration" in the name of the peoples that it supplants.

Meanwhile, the use of institutes with different political trends hides from the public opinion the origin of the funds and the motives that determine their distribution. In numerous countries, the beneficiaries of this "aid" are manipulated without them noticing, even when the individuals who have negotiated the allocation of these funds are perfectly aware of the channels to which they integrate.

The NED’s four satellite institutes are:

American Center for International Labor Solidarity - ACILS. Chaired by John J. Sweeney in his capacity as general secretary of the AFLC-CIO trade union.

Center for International Private Enterprise - CIPE. Chaired by Thomas J. Donohue in his capacity as president of the US Chamber of Commerce, that is, as "boss of bosses" [2].

International Republican Institute - IRI. Chaired by Senator John McCain, who lost the primary elections of 2000 to George W. Bush and who is currently the main supporter in Congress of the global war against terrorism. 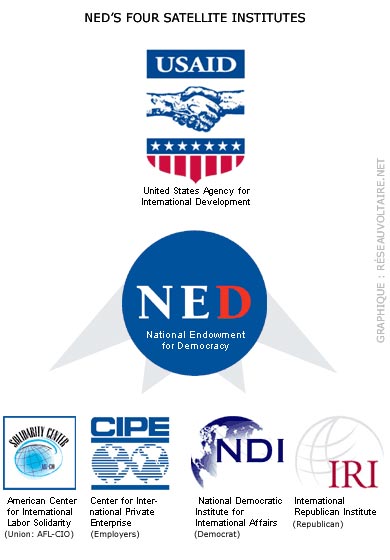 Following the same principle, the NED found correspondents in several allied states, NATO members or members of the former ANZUS, among them: the Westminster Foundation for Democracy (United Kingdom), the International Center for Human Rights and Democratic Development (Canada), the Fondation Jean Jaurès and the Fondation Robert Schuman (France), the International Liberal Center (Sweden) and the Alfred Mozer Foundation (Holland).

On the occasion of its 20th anniversary, the NED made an assessment of its actions that reveals that it currently finances and directs more than 6 000 social and political organizations all over the world. The NED affirms to have completely created the Solidarnosc trade union in Poland, the Charter 77 in Czechoslovakia and Otpor in Serbia. It also boasts of having set up Radio B29 and the Oslobodjenje newspaper in the former Yugoslavia as well as several new "independent" media outlets in the "freed" Iraq. 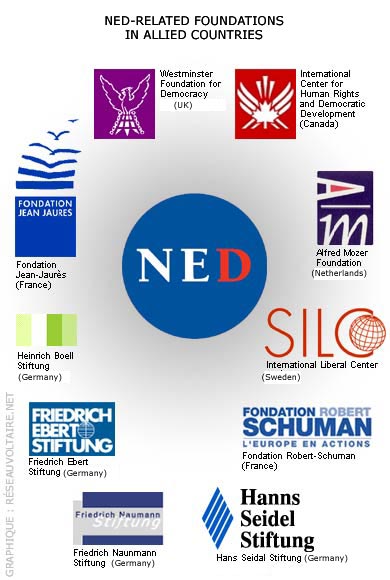 The NED publishes the Journal of Democracy, which is distributed all over the world, and the Encuentro (Meeting) magazine, especially for Cuba, as well as collective books. It also organizes prestigious conferences with the intellectuals it sponsors (for example, historian François Furet and press boss Jean Daniel in France). Finally, the NED "forms" trade union and political leading figures all over the world, in all matters relating to the exercise of "democracy".

Officially, the NED’s budget rises to only 50 million dollars. However, vast co-funding is received and earmarked for organizing its operations. These external contributions, that rise to the tune of several hundred million dollars per year, come mainly from the State Department, the Department of the Treasury and, discreetly, from the CIA.

[1] Let us not forget that most of the neo-conservatives are Trotskyite figures that allied themselves with the CIA against Stalinism. This "left-wing idealist" trend, formerly organized around Democrat Henry Scoop Jackson, joined the Republican Party and currently has an intellectual influence on the White House and the Pentagon.

[2] The CIPE carries out actions against corruption through Transparency International and against the exploitation of child labor through Social Accountability International.

NED, the Legal Window of the CIA

Hong Kong, Under the Umbrella
"The art of war"

Putin, a thorn in Washington’s flesh