George Soros, financier and philanthropist as well as an archetype of the "post-capitalist" speculator and prophet, is flattered and feared at the same time. He is responsible for the "Stock Market crash" and Maecenas in some fifty countries. Today, according to estimates, his fortune accounts for 7 billion dollars. He said he was willing to finance campaigns aimed at preventing George W. Bush’s reelection, in spite of the fact that he himself saved Bush Junior from the 1990 bankruptcy and is still working with his father in the Carlyle Group, a powerful financial organization. He has been equally active in many changes of governments and has been labeled a CIA cover. 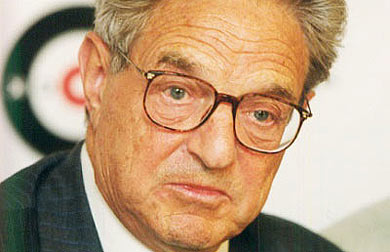 Publicly committed with the US Presidential campaign to prevent George W. Bush’s reelection, billionaire George Soros has unleashed a storm in Washington. Such personal decision has won the famous speculator the sympathy of all those in the world who fear Bush’s reelection as President of the United States.

George Soros was born in Hungary in 1930. As a result of the Second World War, he emigrated to England in 1947. There he met anticommunist philosopher Karl Popper, became his disciple and identified himself with the ideas promoted by this thinker. In 1956 he moved to the United States where he created the "first hedging funds" devoted to meet the demands of the large corporate fortunes. Since 1969, his main company, the Quantum Fund (located in tax haven countries like the Netherlands Antilles first and then Curazao), provides him with a mean income benefit of 34,5 % return investment per year.

The man who made the Bank of England collapse

George Soros has never generated any wealth, but he has enriched himself thanks to his activities in the stock market. With seven billion dollars, his personal wealth would be the 28th most important fortune in the United States, according to a classification made by the Forbes magazine in the year 2003. He has been nicknamed "The man who made the Bank of England collapse", after an operation based on the Sterling Pound (the British domestic currency) in September 1992, a stock market operation that brought him one billion dollars without batting an eyelash, at the expense and to the detriment of the United Kingdom taxpayers. Soros has become the paradigm of speculators. In spite of the fact that he also had to face great losses during the Stock Market fall in 1987, the crisis in Russia in 1998 and the implosion of the stock market speculations on Internet, Soros has been the great beneficiary of the Asian economic crisis that affected, especially, Thailand, Korea and Indonesia since 1997.

President and director in charge of a great number of societies to which he would devote more than 300 million dollars, Soros became one of the greatest philanthropists of modern times. His main foundation, the Open Society Institute, takes its name after the philosophical project of his maestro Karl Popper: to build open societies, meaning an awareness of imperfections and a willingness to advance so as to create a better world. His main programs tend to defend human rights, to fight against drug-dependency, to train political leaders and to develop the freedom of information. These objectives agreed by consensus include controversial campaigns for the defense of homosexual’s rights, the decriminalization of drugs and the establishment of substitution programs for drug-addicts. This charitable and progressive activity has wisely contributed to wipe off his financial predator image.

Nevertheless, for many years now, many voices have suggested that his philanthropic actions are nothing but a false facade and a cover for the CIA and the State of Israel interventions in the world and that he owes his fortune to financial crimes, not to the magic fingers of "King Midas". [1] At the beginning, the Quantum Fund was administered by representatives appointed by Lord Jacob Rothschild (Mijail Khodorkovsky’s proxy), Sir James Goldsmith (who was a European deputy) and Edmond Safra (main Israeli negotiator of weapons).

Member of the Carlyle Group

Recently, the American newspaper The Nation revealed that George Soros, through the Harken Energy and Spectrum 7 societies, was the one who, in 1990 saved George W. Bush from bankruptcy by eliminating and absorbing his debts. When asked about this by the newspaper, Soros stated that he did so in order to buy a "political influence" (sic) [2]
Like his friend Khodorkovsky, George Soros joined the Carlyle Group when this company became the "financial shelter" for many in the former Bush father administration in 1992. Today, that company is the most important fortune-administration society (financial portfolio) in the world. It is in charge of administering the billionaire wealth of Bush and Bin Laden families through the societies it controls. The Carlyle Group is the eleventh provider of the Pentagon.
On December 20, 2002, George Soros was sentenced to pay a fine of 2,2 million dollars by the Paris Correction Court for the commission of a financial crime, when he tried to attack the Societe Generale, a French company, in the stock market.

Aside from the Open Society Institute (OSI), present in almost fifty countries, George Soros has created or financed several very important and prestigious associations and foundations the Human Rights Watch and the International Crisis Group.
Human Rights Watch (HRW) was one of the humanitarian organizations that submitted most of the evidences and documents against the crimes attributed to Slobodan Milosevic, thus justifying NATO intervention in Serbia. A significant part of the accusations made by this association has not yet been confirmed by the International Criminal Court for Former Yugoslavia.
The International Crisis Group (ICG) was created in 1994 as a non-governmental (NGO) diplomatic organization, headed by the US Democratic Senator George Mitchell (who, later gave his name to the Report on the Israeli-Palestinian Question). Actively working in Burundi, Nigeria and Sierra Leone (African countries) at the beginning, the ICG was getting closer to NATO on the Yugoslavian crisis. It is currently presided over by Martti Ahtisaari, the former President of Finland who pretended to be negotiating with Milosevic to prevent the war. His Administrative Council gathers the elite of NATO personalities. By his side, former national security advisors like Richard Allen and Zbigniew Brzezinski, the Kuwaiti Prince Saud Nasir Al-Sabah, the former prosecutor of the International Criminal Court for Former Yugoslavia, Louise Arbour, and former NATO Supreme Commander during the Yugoslavian War, General Wesley Clark. We also find some financial links like former President of The Philippines, Fidel Ramos, or the Russian oligarch Mijaíl Khodorkovsky, all of them members of the Carlyle Group. Likewise, some French personalities like Simone Veil, President of the Shoah Memorial, and journalist Christine Ockrent, wife of former Kosovo governor, Bernard Kouchner. In 2001, George Soros created the Democracy Coalition Project (DCP) in charge of encouraging the non-governmental forum beside the summit meetings of the Community of Democracies organized by the United States State Department.
His agency includes the most important neoliberal economists. Likewise, he created a Network Media Program that bought the archives of the Radio Free Europe (one of its former leaders, Herbert Okun, forms part of OSI management), the CIA radio station during the Cold War. Besides, he has subsidized several "independent" mass media stations like B92 radio during the Yugoslavian War and today the "free" newspapers in Iraq. He controls the Project Syndicate, a mass media agency publishing editorials on political personalities in 181 international daily papers. These authors include a great number of ICG managers, as well as the cream of neoliberal economists. [3].

He argues manipulation of 9/11 victims

In September 2001, shortly after the attacks George Soros participated in a working group of the Council on Foreign Relations, the club of the establishment in Washington, on the role to be played by the mass media in the war on terror. Sessions were presided over by Ambassador Richard C. Holbrooke, who played an important role in the attack launched against Yugoslavia and whose wife, Kati Marton, is the OSI manager. Conclusions reached at that meeting were sent to President Bush for him to use them and convince the rest of the world of the well-founded foreign policy of the United States, mentioning and repeating once and again, the 9/11 attacks, manipulating the civil victims of these attacks to provoke compassion. He insists so as to force foreign governments not only to condemn the attacks, but also to approve his reasoning leading to a war on terror. Besides, he advises on the mass media presence in the world and supports the inclusion of New York Times supplements in large friendly newspapers.

Russia expelled the Open Society Institute at the end of 2003

Recently, George Soros played an important role in the change of governments, especially in central and eastern Europe. He was particularly active in Poland, where he was, at the same time, friend of General Jaruselski and of the main official patron of the Solidarnoc (Solidarity) trade union, the Polish Bronislaw Geremek, who is currently member of the ICG administrative council. He was also very active in Hungary, his native country.
It is highly probable that he also engaged in the preparation of the "Velvet Revolution" in the Czech Republic, an action that culminated with Vaclav Havel as President. He repeated the same model in Serbia to defeat Slobodan Milosevic and, recently, in Georgia against Edouard Shevarnardze. Every time he has been served and supported by Otpor-style youth organizations. He has been accused of stirring popular disturbances in Ukraine and Belarus. In order to put an end to his intervention in Russia, authorities have resorted to the pretext that the rent was not paid to expel the Open Society Institute some days after Mijaíl Khodorkovsky was detained under complot suspicions.

Bearing in mind the multiple facets of the man who "made the Bank of England collapse", it is difficult to understand why he decided to invest 12 million dollars now to prevent de George W. Bush’s reelection. In an interesting article published by the New Statesman [4], journalist Neil Clark affirms that the President and the billionaire, who have collaborated and cooperated for such a long time, agree on a neoliberal Empire but disagree on the way of turning it into a reality. George Soros, who for so many years has tried to humanize financial capitalism, considers that the brutality shown by George W. Bush jeopardizes the acceptance of this system by peoples. Others suggest that Soros campaign is doomed to failure and that it only serves to create a false illusion, the illusion that there is a democratic debate going on in the United States.
In 2002, George Soros stated: «In ancient Rome, only the Romans could vote. Under world modern capitalism, only the Americans can vote. Brazilians, they do not vote». [5] Now, you see, this is the futre program, things are going to be even better...

[1] Mystic character, King Midas transformed everything he touched in gold.

George Soros is funding the independence of Catalonia

The Hidden Financial Ties between the Bush and the Bin Laden Families.
Who Benefits from Crime?