False reasons to intervene in Iran

After having invaded Iraq, the hawks redouble their pressure on Iran and Syria. The Pentagon’s Office of Special Plans is setting up Iranian opposition groups in exile around the son of the defeated Shah and is orchestrating an international propaganda campaign. Anticipating a probable opposition by Paris, its actively trying to shape French public opinion. It’s also bringing back the Peoples Mujahedeen and negotiating its rearmament, even when the State Department views them as terrorists. 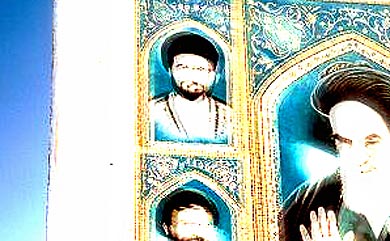 The Hawks expressed their intentions toward Iran back in 2000, in the book/program of the Project for a New American Century, Current Dangers [1]. Signed by a former CIA head of secret actions in that country, Reuel Marc Gerecht (alias Edward Shirley), the Hawks have listed five reasons for a conflict:

- Iran sponsors terrorism. In a nutshell: Teheran ordered the killing abroad of at least 80 exiled opponents [2], backed the Palestinian resistance movement -included Hezbollah-responsible for the attack against the US Marines Headquarters in Beirut [3], and is involved in the bombings in Buenos Aires [4].

- Iran supports Islamic militants around the world: Despite apparent differences between Shiites and Sunnites, Teheran is financing, at least partially, all violent Islamic organizations around the world.

- Iran opposes the peace process and the very existence of Israel.

- Iran violates human rights, specifically those of Bahais and Jews. However, such practices —that characterized the harshest period of Khomeini’s revolution-are quite unpopular and constitute the Achilles’ heel of the regime.

- Finally, Iran is trying to acquire the atomic bomb.

These accusations are listed in the same terms in the « Hawks’ » program updated in early 2004, under the title An End to Evil [5]. However, the authors, David Frum and Richard Perle, go too far. They write: « The Mullahs are harboring some of the surviving Al-Qaeda leaders», on the one hand, and on the other they get into a long digression on Teheran’s hypocrisy regarding the nuclear issue [6]. In their view, Iran represents a threat that George W. Bush rightly includes in the “Axis of Evil” [7], and the Clinton Administration was weak when believing that the country could evolve peacefully.

Both conclude that: «Ali Khamenei (...) is not more entitled to control Iran than other criminals are to control persons and property. We do not always have the chance to do something against such criminals nor are we always willing, but whenever we have the chance and are willing to do so, we should remove dictators with no more remorse than a police sniper has when he guns down a criminal in control of a group of hostages. We cannot establish democracy just because we want to. But we are never compelled to honor the claims of undemocratic governments».They never once take into consideration America’s responsibility in the toppling of Mossadeg, the Pahlavi dictatorship or the Iraqi attack against Iran.

Sharon government with the Hawks

Once again the position of American neo-conservatives coincides with that of Sharon’s government: to put more pressure on Iran and Syria simultaneously. Also, in early 2002, Morris Amitay and Michael Leeden established the Coalition for Democracy in Iran (CDI) [8], the main objective of which was to get the Congress to approve a $50 million budget to support Iranian opposition. To this end, they sought the support of Senator Sam Brownback, Republican for Kansas [9].

On July 11, 2003, they succeeded in getting approval for an amendment to the State Department Authorization Bill, including moral support to Iranian opposition as an objective of American foreign policy [10].  [11].

They both have been working together for a long time in the Jewish Institute for International Affairs (JINSA). A former National Security Council expert, where he played a role during the Irangate affair, Michael Leeden is considered one of the foreign members of the P2 Lodge in Italy and he has proved to be a master of misinformation by popularizing the “Bulgarian Trail” theory at the time of the assassination attempt against the Pope John Paul II. Morris Amitay and Michael Leeden also work together in the

American Enterprise Institute (AEI), with Mrs.Cheney. There, they organized on May 8, 2004 a Symposium entitled “Iran’s future: Mullahcracy, Democracy and War on Terrorism” [12]. The event was sponsored by the Hudson Institute and James Woolsey’s Foundation for the Defense of Democracies. Ambassador Uri Librani attended the symposium representing the Ministry of Defense of Israel [13].Other participants included the French researcher Bernard Hourcade, Professor Rob Shobani (Chairman of the Caspian Energy Consulting Board) and Ladan Boroumand (of the National Foundation for Democracy).

On this basis, Vice-President Dick Cheney instructed the Office of Special Plans to work on the destabilization of Iran. This body, based at the Pentagon, worked on the misleading information regarding Iraqi weapons of mass destruction [14]. It is currently focused on propaganda against Iran and Syria. Following the plan used with the Iraqi National Congress, several organizations were contacted and recruited: Ramin Parham’s Iran Institute for Democracy; Roozbeh Farahanipour’s Glorious Frontier Party (Marza Por Gohar), Manda Zand Ervin’s Iranian Women International Alliance, Aryo Pirouzni’s Students Movement for Democracy in Iran.

The Office has also been a mentor for Hussein Khomeini, the Supreme Leader’s grandson, and for Reza Pahlavi, the son of the last Shah and pretender to the imperial throne. It was also in charge of publishing the Memoirs of former empress Farah Diba [15].

On the other hand, through Benador Associates public relations office; the Politique internationale magazine published in late 2003 a research paper entitled “To Destroy the Islamic Republic” to which Bernard Hourcade contributed.

A false private radio station in Farsi was set up at Guantánamo Base to broadcast to Iran, apart from Radio Free Europe’s service in Farsi.

The Office of Special Plans re-established contacts with Peoples Mujahedeen, though the State Department considers it a terrorist organization. In fact, Myriam Radjavi’s group has perpetrated numerous attacks against the Mullah’s regime not only in Iran, but also around the world, even killing five American citizens.

During the Iran-Iraq war, Peoples Mujahedeen fought on the side of the Iraqi army. Later on, after the war, it continued to serve Saddam Hussein by doing the dirty work of the regime whenever the National Guard refused to do so. On January 24, 2004, Mujahedeen were authorized to hold an impressive rally at the Congress Palace in Washington, under the pretext of a humanitarian collection for the victims of the Barn earthquake. Richard Perle himself made a speech at the rally against the Teheran regime [16].

To arm the Mujahedeen the Office of Special Plans turned to Manucher Ghorbanitar. This Iranian arms dealer had been an intermediary in the transactions organized by Michael Leeden during the Irangate. This summer, Ghorbanitar met with Harold Rhode and Larry Franklin, from the Defense Intelligence Agency, (DIA) at the Pentagon.

Hearing about the matter, Secretary of State Colin L. Powell submitted an irate protest to Defense Secretary Donald Rumsfeld. But nothing changed and preparations are going on [17]. Pawns are lined up so the game can begin.

[1] Present Dangers, Crisis and Opportunity in American Foreign and Defense Policy, a collective work led by Robert Kagan and William Kristol (Encounter Books, 2000). The title is a reference to the Committee on Present Danger that at the time of its establishment flared up the cold War spirit in the United States

[2] One of them was killed in American territory: Alí Akbar Tabatabai, president of the Iran Freedom Foundation, killed on July 22, 1980 in Bethesda (Maryland) by David Belfield (alias Daoud Salahuddin), currently a refugee in Iran. According to the Washington Times of December 20, 2001, David Belfield played -under the pseudonym of Hassan Tantai - the protagonist role in the film Kandahar.

The film, denouncing Taliban oppression in Afghanistan, received the ecumenical jury Award at the Cannes Festival

[3] On October 23, 1983, a truck with over 1.2 tons of TNT blew up at the US Marines headquarters in Beirut, killing 241 American soldiers. A second load against the Drakkar killed 58 French paratroopers

[7] The term “Axis of Evil” was created by David Frum himself, when he wrote George W. Bush’s State of the Union address

[10] Amendment 1145 a to the State Department Authorization Bill

[11] Leeden told his own version of the facts in Perilous Statecraft: An Insider’s Account of the Iran-Contra Affair, by Michael Leeden (Scribner, 1998)

[12] Cf. The Future of Iran: Mullahcracy, Democracy and the War on Terrorism, May 6, 2003, American Enterprise Institute.[[ Ambassador Uri Librani represents Israel in the negotiations for the exchange of prisoners of war. He was also chief of staff of Chancellor Helmut Kohl

[13] Ambassador Uri Librani represents Israel in the negotiations for the exchange of prisoners of war. He was also chief of staff of Chancellor Helmut Kohl

[15] Farah Diba’s Memoirs were published in France by XO Éditions. At the time of the publication, the former empress starred as a guest in Des racines et des ailes, (a France 3 channel program) on October 15, 2003), and in Vivement Dimanche (a France 2 channel program), on December 7, 2003. Farah Diba talked in favor of ousting the current regime

[17] The interview was made public by Knut Royce and Timothy Phelps. Cf. “Arms dealer in talks with US officials about Iran”, in the Sidney Morning Herald, August 9, 2003. See also “Meetings with Iran-Contra arms dealer confirmed”, by Bradley Graham and Peter Slevin, in Washington Post, August 9, 2003