The Center for Strategic and International Studies (CSIS) of Washington was created in 1962 by the initiative of the CIA director of Investigations. It became soon the favorite institution of the Cold War analysts who worked for Henry Kissinger and Zbigniew Brzezinski. In the 80’s, Ronald Reagan recruited there his main Defense advisers, and in the early 90’s, it was just right there where Bush senior found Dick Cheney, minister of Defense during his term. By reviewing the reports on the coming energy crisis, CSIS developed during the last few years under the leadership of Senator Sam Nunn, and focused on the war against the emergence of nuclear powers, oil strategies and civil war. 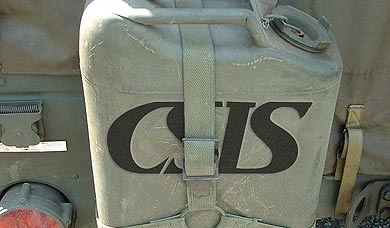 In 1962, Ray S. Cline, who had been appointed CIA deputy director and favored by the movements that sanctioned the Bay of Pig’s fiasco, decided to establish a higher institute for strategic strategies to recruit experts and lead the ongoing work.

Ray S. Cline was an OSS agent during the Second World War, an analyst in the war in Korea, liaison agent between the American and British services, and finally CIA chief in Formosa (1958 - 1962). He created the People’s Anticommunist League of Asia and the Officers Academy of the Political Warfare in Taiwan [1].

During his career he did not allow the Agency to mix information gathering with its analysis and the actions that would derive from them. He developed in the CIA an Information division for data processing, identification of uncovered areas, drafting reports and send them to the relevant person. It was precisely under this principle that the Center for Strategic and International Studies (CSIS) was created.

Ray S. Cline relied both on the retired admiral Arleigh Burke, founder of Polaris program, and the historian David M. Abshire. Together, they founded the Center on September 4, 1962, at the Jesuit University of Georgetown, in Washington, and hired Richard V. Allen as permanent director.

With the support of Relm-Earhart Foundation, CSIS hosted the first conference on economy and national security issues. More than 30 speakers attended, such as the young professor from Harvard, Henry Kissinger, James R. Schlesinger (future CIA director and Secretary of Defense), the economist Murray Weidenbaum (future president of the OECD Council) and Donald Rumsfeld (congressman from Illinois at that time).

In 1966, the Center presented its analysis on China-USSR dispute at the House of Representatives.

In 1968, CSIS made a political commitment. Richard V. Allen was the adviser to Richard Nixon during his campaign as candidate for matters on foreign policy and became later member of the National Security Council. David M. Abshire came to be assistant to the Secretary of State for relations with the Congress. In 1973, it carried out a campaign to increase public opinion’s awareness on energy matters and produced a documentary at Hanna-Barbera studio that was broadcasted to 40 million viewers. As a result, Senator Hubert Humphrey got the votes to build an oil pipeline in Alaska.

In 1974, President Gerald R. Ford, instructed an independent commission to come up with a proposal pertaining to reforms in government institutions for foreign policy. [2]. Among others, the President appointed David M. Abshire to be part of the commission. He worked with Anne L. Armstrong, who in turn became president of CSIS Executive Committee.

At a later date, Gerald Ford appointed Abshire as head of the radio propaganda system for eastern countries. CSIS created a working group under Frank Staton, CBS president and whose proposals were approved to reform public diplomacy. In the interim, Anne Armstrong was nominated Ambassador in London.

Under Carter’s administration, CSIS held hearings at the Congress to reveal the magnitude of the Cambodian genocide. An amazing documentary was also produced on a terrorist attack in Manhattan.

CSIS showed its satisfaction with the election of Ronald Reagan [3]. Richard V. Allen, who was one of his closest advisers during the campaign, became the National Security Adviser and David M. Abshire was appointed Ambassador to NATO. As for Anne Armstrong, she chaired the Intelligence Advisory Committee abroad.

The representative from the State of Wyoming (USA), Richard B. Cheney, joined the Center and headed a group of studies on the Grand Strategy. It was the time when the political scientist Zbigniew Brzezinski, the strategist Edward N. Luttwak, and the journalists Arnaud de Borchgrave and Michael Ledeen came in to play their roles. The Center became then the place where everything pertaining to arms control was done under Senator Sam Nunn. As a result, the Nunn-Lugar with USSR agreement was signed, including the drafting of the Goldwater-Nichols of the Defense Department.

During 24 years, the Center recruited university professors, produced analysis and multiplied interventions on means of communication. The funding was through donations from the extreme right-wing banker Richard Mellon Scaife, the Prince Turki bin Abdul Aziz, head of the Saudi secret services and Mobil oil transnational.

However, the strong ideological and very poor academic nature of its works, including the systematic support provided by Reagan administration, affected the image of the University of Georgetown that decided to work on a separate basis. Therefore, in 1986, CSIS became a think tank (center for investigation, propaganda and dissemination of ideas, generally of political nature) independent, but it faced uncertainty for some years. In 1989, George H. Bush senior was elected to hold the post at the White House, and appointed Dick Cheney Secretary of Defense who worked with CSIS experts. The think tank was temporarily beheaded.

From Cold War to Energy Crisis 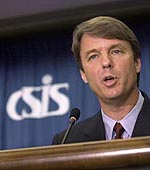 CSIS resumed its functions when its officials quit their official duties after Bill Clinton was elected. It became immersed on the Free Trade Area of the Americas. In 1995, it launched a campaign against the proliferation of weapons of mass destruction. The alliance with Saudi Arabia that had been in secret during the Cold War and was consolidated with the Gulf War, gradually faded away.

As the energy crisis approached [4] those who advocated for the clash of civilization [5] joined the Center. Bernard Lewis, Samuel P. Huntington and Francis Fukuyama supervised the works. BP Amoco [6], Exxon and Chevron expressed their support and the Japanese millionaire Kasuo Inamori, founder of Kyocera group, and president and general manager of DDI Telecommunication Company, funded the establishment of a Leadership Academy: AILA. Anthony H. Cordesman, Gulf military specialist, took charge of a strategy program.

CSIS worked, above all, to strengthen the relations with Atlantic. It hosted in 1997 a major international conference under the chair of Zbigniew Brzezinski and Jacques Delors for Europe-America unity. After September 11 attacks, CSIS reviewed the rise of the so-called anti-Americanism in Europe. Together with the German Marshall Fund, a common statement was released to renew the transatlantic partnership [7] to enhance the ties between the European Union and NATO, and requested the United States to work with them on a Constitution draft for Europe.

Michèle Alliot-Marie and Jean-Daniel Levitte.
within a conference at CSIS. 16th January, 2004

In year 2000, CSIS, with the assistance of Ted Turner, CNN Director, created an international network of Atlantic institutions for strategic studies to carry out investigations pertaining to nuclear proliferation. The program, which is called Nuclear Threat Initiative - NTI, is headed by Sam Nunn and encouraged the recent G8 summits.

Currently, CSIS has a capital of 25 million dollars. Its operational annual budget is 22 million and has 190 investigators. It issues the quarterly magazine Washington Quarterly, including a number of newsletters and books. Apart from its headquarters in Washington, where over 600 conferences are hosted under Richard Fairbanks, there are also two local groups in Texas: one in Houston, headed by Robert Mosbacher (headed before by Kenneth L. Lay, president and general manager of Enron), and the other one in Dallas, which is led by Richard Cheney.

In order to enhance its image, it gathers about 20 millineries twice a year in an International Council chaired by Henry A. Kissingger [8].

On September 9, 2002, the Center for Strategic and International Studies celebrated its 40 years, and about 850 personalities were reunited for a gala dinner in New York [9]. The event was hosted by John Hamre, H.E. Cardinal of Washington Theodore J. McCarrick, Senator Sam Nunn, David Abshire, Anne Armstrong and Henry Kissinger. The US vice-president Dick Cheney, was unable to attend due to security reasons, but participated through a videoconference from his underground bunker. The conservative oil lobby was also present in the event.

[2] Commission on the Organization of the Government for the Conduct of Foreign Policy, presided by the anti-Gaullist Ambassador Robert D. Murphy

Washington officials secretly evaluate the use of military force against Venezuela

Group of 28 major US think tanks funded by 64 governments