War as a World Strategy

The control of Iraq’s energy resources represents an essential strategic bet for the United States. The economic bet lies on the arms market and, above all, in that of reconstruction. Five big associations share the biggest public market since the end of World War II. George Schultz, Donald Rumsfeld and Dick Cheney are behind them. 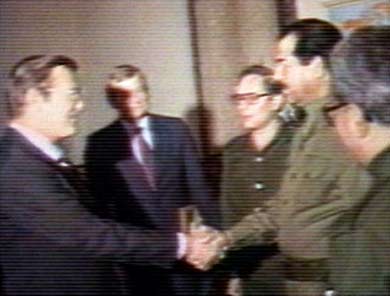 Donald Rumsfeld, when he was sales representative in weapons of mass destruction, with his customer Saddam Hussein.

Jacques Chirac continuously repeats that, in the eyes of the Europeans, «war is the worst of solutions, evidence of a failure». As George W. Bush’s favorite essayist, Robert Kagan, highlights this way of thinking is precisely what determines the main opposition between the old Europe and Washington’s neo-conservatives in power, who regard war as a creative event that allows regenerating the world, like the destruction of employments can be a process of modernization of the means of production.

From this point of view, the destruction of Iraq marks the opening of the biggest public market since the end of World War II. Even President Bush launched his ultimatum against Iraq, and the Pentagon, which aims at exercising a military protectorate over the country, had already signed the reconstruction contracts.

Five big US associations share this gigantic cake. First, there is the Bechtel Group. This construction company, the most important in the United States, has belonged to the Bechtel family over the last four generations. One of its administrators is no other than George Schultz, former State Secretary of Ronald Reagan. Schultz also presides over the Advisory Council of the Committee for the Liberation of Iraq, pro-war lobby financed by Lockheed Martin. The Lockheed Martin-Bechtel alliance opens the door for a new kind of business: the destruction of a country by an arms manufacturer and, later, its reconstruction by a specialist in reinforced concrete.

Schultz also holds a post in the management of Gilead Science, the giant of the pharmaceutical industry whose Administration Council was presided over by Donald Rumsfeld until he returned to the government. This firm has just obtained important public markets in the framework of the prevention of biological and chemical attacks. In effect, Rumsfeld has managed to convince the US public opinion of the fact that Saddam Hussein could have kept some weapons of mass destruction that the US had sold to him during the Iran-Iraq and that Baghdad could use against the American people. Over the last years, Gilead Science has obtained most of its benefits producing antiviral medicines to treat AIDS.

As the very high prices of these treatments do not allow them to spread in the Third World, many countries have tried to create them without a license and they have been sanctioned by the World Trade Organization (WTO). In 1998, identical anti-viral drugs were created by a pirate laboratory in Al-Shifa (Sudan). At the request of Rumsfeld and Schultz, Bill Clinton accused the Al-Shifa center of being a facade to manufacture weapons of mass destruction for Al-Qaeda and had it bombed. Several international investigations later showed that these accusations were unfounded.

In second place, there is the Halliburton Company. A world leader in oil equipment, this association knows very well the country where it has reconstructed the drilling and refining facilities after the Gulf War of 1991. Then, its president was Dick Cheney who had just led the destruction of the country as Defense Secretary of George H. Bush (Sr.). Although Cheney officially gave up his private functions after being appointed Vice-President of George W. Bush (Jr.), he continues to receive residual emoluments to the tune of one million dollars annually. So, from an equivocal position, he will lead this new destruction of Iraq that will give him new bonuses.

The other companies that will benefit from the destruction of Iraq are the Fluor Group, Parsons Corporation and the Louis Berger Group: three associations that have been particularly generous with the think-tanks of the fundamentalists.

In these conditions, we may ask ourselves about the targets of the US bombing in Iraq: will they be only military targets or will they be part of the preparation of the world’s largest reserve?