The American Enterprise Institute in the White House

The American Enterprise Institute (AEI) has become the propaganda center of the Republican ruling class in favor of free market imperialism. Like a Russian doll, it contains the New Atlantic Initiative (NAI) that leads the Euro-Atlantic integration and the Project for the New American Century (PNAC) included in the program of the Bush administration. The Institute is directed - behind the scene - by former president Gerald Ford and current vice-president Dick Cheney. Every year they invite around a hundred personalities to a winter resort in Colorado where they discuss behind closed doors.

Gerald Ford (center) with his collaborators Lynne and Dick Cheney

In the 1930s, in the United States, the ruling class applauded the reorganization of the stock market after the crack of Wall Street and the creation of commissions that controlled the economic activities by sectors. However, they rejected the social measures taken by President Franklin D. Roosevelt (authorization of trade unions, social security, and unemployment compensation) and, particularly, his desire to plan production.

Likewise, when in 1943 the Democrats asked Congress to maintain the price blocking after the end of the war to avoid a new crack of the stock market, the big employers mobilized to defend the “free market”. Thus, the American Enterprise Institute was born around giants Bristol-Myers, of the antibiotics field; the General Mills, of the food and agricultural industry; and the Chemical Bank.

For its lobbying, the Institute counts on the services of some renowned specialists such as Roscoe Pound, Dean of the Law Faculty at Harvard, and - especially - journalist Raymond Moley, former economic advisor of Roosevelt, who had already changed sides.

The patronage of Gerald Ford

During its first decade, the AEI focused on Congress lobbying. In 1954, William J. Baroody, in charge of the US Chamber of Commerce, assumed the direction of the Institute. Continuing with its lobbying in Congress, the American Enterprise Institute also began to address the general public to become a propaganda center of the Republican ruling elite.

In 1974, President Gerald Ford incorporated several AEI intellectuals to his team, including William J. Baroody Jr., whom he entrusted the contacts of the Institute in the civil society under the control of the White House General Secretary, Dick Cheney. In fact, it was not difficult for the Baroodys to convince the big owners to behave generously and they made significant contributions that rose to the tune of eight million dollars annually to finance numerous books about the wonders of capitalism and the Soviet danger, including the best-sellers The Spirit of Democratic Capitalism, by Catholic theologian Michael Novak [1] , and Two Cheers for Capitalism, by anti-Communist journalist Irving Kristol [2] .

When Gerald Ford left the White House in 1976, he and a dozen of his collaborators were included in the payroll of the Institute [3] .

In the opposition, the American Enterprise Institute proves to be an excellent war machine for the Republicans, although it faces the competition of the new Heritage Foundation, with less prestige but with more reaction capacity [4] , and of the Cato Institute. William J. Baroody Sr. died in 1979, shortly before Reagan assumed power. His son, Baroody Jr., tried to continue his work but the financing dispersed among rival associations. The AEI lost its means and influence. It then tried to split from its rivals readjusting its position in a more moderate framework. The crisis reached its peak in 1986 when the extreme right-wing organizations Olin and Smith Richardson stopped financing the AEI, which they though was moving to the center. Then, Baroody Jr. had to resign as the AEI was sinking in a sea of debts.

Christopher DeMuth, a jurist of Nixon’s and Reagan’s teams, assumed the direction of the Institute and went back to the hard line. It took him four years to balance the financial situation. In particular, he paid special attention to developing the World Forum that Gerald Ford organizes every year in Beaver Creek (Vail Valey, Colorado). It is there, behind closed doors, that the big intrigues of the Republican Party are organized. In 2004 (June 16-19), around a hundred carefully chosen personalities gathered there during a weekend. With the presence of Vice-President Dick Cheney, discussions focused on the electoral strategy of the then ongoing presidential campaign. Also on that occasion, the director of the Federal Reserve swore in before the vice-president for his fifth consecutive mandate [5]. 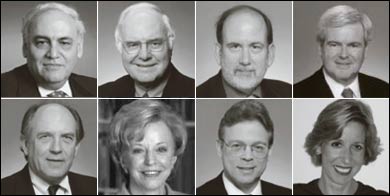 The Shadow of Dick Cheney

With a budget of 18 million dollars in 2002, the American Enterprise Institute already has 75 researchers and a similar number of administrative personnel. Some of the AEI stars include Lynne V. Cheney (Dick’s wife), Elizabeth Cheney (Dick’s daughter) [6] , David Frum (former editor of George W. Bush’s speeches) [7] , Newt Gingrich (former Speaker of the House of Representatives), Jane Kirkpatrick (Ambassador in Geneva) and, above all, Richard Perle (advisor to the Defense Department). Among the experts, we can mention some of the authors well known by the readers of our section “Open International Forum”: Reuel Marc Gerecht, supporter of an intervention in Iran; Michael A. Leeden (former member of Logia P2), who is always willing to laud Israel’s policies; Joshua Muravchik, ready to export democracy by force; Danielle Pletka, always searching for a new military adventure; etc.

The AEI evolution to the extreme right became publicly known in the mid 1990s with the publication of two works: The Bell Curve [8], by Dinesh D’Souza, affirms that the slavery of black people was not a racist practice but a social reaction to enclose its pathologies. The work continues denouncing anti-racism, which it considers more dangerous than racism itself.

In 1996, the American Enterprise Institute showed concern for the delay in the implementation of the Baker Plan for Europe. The countries of Eastern and Central Europe were making efforts to adapt themselves to Capitalism and to join NATO and the European Union. In the meantime, faced with the reforms, Western Europe seemed hesitant - particularly France which had just scandalously rejected the Juppé projects.

This general delay significantly postponed the merging of ALENA and the European Union in the heart of an area of transatlantic free exchange. In order to activate the process, the Institute called a big conference that took place in Prague (May 10-12, 1996) and founded the New Atlantic Initiative (NAI).

This satellite association is co-headed by Henry Kissinger [9] and Lane Kirkland (AFL-CIO General Secretary) [10] . It is sponsored by Vaclav Havel, Margaret Thatcher, Helmut Schmidt, Leszek Balcerowicz and George Shultz. Immediately, it had the support of the most important Republican figures in the army, in politics and in finances.

After the terrorist attacks of September 11, 2001, the New Atlantic Initiative multiplied its meetings and publications about the alleged “conspiracy” and anti-Semitism of the Europeans, the deepening of the transatlantic pit, that is, between Europeans and Americans, etc.

Finally, the American Enterprise Institute houses in its facilities the electoral think-tank (center of research, propaganda and spreading of ideas, general of a political nature) of George W. Bush: the Project for a New American Century (PNAC), presided over by William Kristol (son of Irving) and directed by Gary Schmitt. It was there where the openly imperialist version of the program Junior was designed, aimed at the contributors of the campaign. It was also there where the invasion of Iraq was organized [16].

Thus, it is completely logical that, on February 26, 2003, President George Bush chose the dinner of the annual gala of the American Enterprise Institute to reveal his program of conquest of Iraq and the creation of a free trade area in the Middle East.

[1] The Spirit of Democratic Capitalism

[8] The Bell Curve, by Richard Murray, theorizes about the genetic predisposition of black people to commit crimes and justifies the policies of massive incarceration. The End of Racism[[The End of Racism