Changes in the Persian Gulf


Iran allies with China to face the United States

When Mulah’s Government (Iran) was about to fall into United States’ trap in the forthcoming Summit of the International Atomic Energy Agency, Tehran got out of the jam and became triumphant. Germany, France and the United Kingdom assured that the Iranian nuclear facilities were civil-oriented, whereas Iran entrusted its gas production to a new actor in the region: China. Now, Tehran fears no longer the threats of economic sanctions and could play an important role in Iraq, Lebanon and the occupied Palestine.

The United States has long launched a crusade to control energy resources worldwide not only to secure its own needs but also to put pressure on the rest of the industrialized countries (Kissinger’s doctrine). Obviously, the US targeted the Persian Gulf region which has two thirds of the exploitable resources nowadays. In 2003, Washington took a first step and attacked Iraq that had very important reserves and had been disarmed for 12 years already. At the same time, it exerted external pressure on Iran by threatening to impose economic sanctions, and internally on Saudi Arabia by encouraging a wave of terrorist attacks.

In order to control the Iranian hydrocarbons, the United States tried to establish a Government in Tehran of servile status. It planned to achieve this goal through economic and diplomatic channels. To this effect, Washington patiently made a whole file: publications of arguments, the establishment of financed associations and even a mediatic tour across Europe by Sha’s widow and his latest son [1].

The strategy was to isolate diplomatically Iran and then imposed economic sanctions to encourage civil unrest and overthrow Mulah. The fabricated excuse was not very original: Iran was making weapons of mass destruction to attack its neighbors, among them, Israel was the first one. Tehran would be accused then of developing a military nuclear program that was not in compliance with the Treaty on Non-proliferation of Nuclear Weapons, although it had been one of its signatories.

On November 19, the Mudejars Rallied in Washington against Iranian Weapons of Mass Destruction. 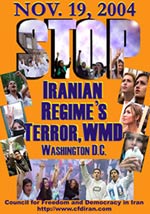 Since there were slight differences between the military and civil use of nuclear energy, any action in this regard had to be guaranteed. Iran utilized its own oil resources to get civil nuclear facilities. It was one of its economic strategies but paradoxically that was the reason why it was reproached for those who have oil do not need nuclear energy (an argument that obviously the US does not apply to itself).

One and a half years ago, the United States multiplied its accusations and requested the arbitration of the International Atomic Energy Agency (IAEA) [2]. Washington’s plan was an open secret. The Bush administration did not have to take any action that would add up to Iraq’s intervention during the elections, but immediately after the presidential elections, it had to demand IAEA to put up the case to the Security Council. Then, the Department of State would trigger an escalation of three stages: a resolution that would demand Iran to be subjected to IAEA; a second resolution that would demand the suspension of its production cycle of nuclear fuel and a third one to put an end to any nuclear-related activity [3].

Since Iran would not show good faith and would refuse to accept, it would be subjected to strong economic sanctions that would ruin it overnight and cause internal problems which would lead to overthrow the regime.

Mediation of the European Troika

To tackle such unfortunate fate, Iran tried to come out its diplomatic isolation and enhanced alliances. That is why it requested the mediation of the European Troika (Germany, France and the United Kingdom). It authorized three countries to get involved in its internal affairs to prove Tehran’s good faith and this would help to cease its isolation, especially by becoming a member of the World Trade Organization (WTO).

At the same time, Europeans could do some good business, particularly selling locomotives. On October 21, 2003, on the occasion of a spectacular visit by the three European Foreign Ministers to Tehran, Iran agreed to cooperate totally with IAEA and even to sign an additional protocol on the Treaty of Non-proliferation. Thereafter, a number of meetings between AIEA and Iran took place while the international context changed.

In Iraq, the Anglo-Saxon Coalition (which invaded Iraq without UN’s authorization), progressively stirred up revolt among the population against itself since there was no respect at all for its commitments on reconstruction and democratization. Taking advantage of the emptiness created by the overthrow of Sadam Husein, Iran established close links with the Iraqi Shiite community and later with the resistance. Tehran played as much as possible with moderation and used this time to assist the Shiite community to reorganize.

On October 2004, negotiations between Europe and Iran were speeded up and a new agreement on a moratorium basis was signed. Iran suspended its activities pertaining to enriched uranium during the negotiation process with Germany, France and the United Kingdom, thus guaranteeing the civil nature of its nuclear program. However, it had the right to rescind its decision unilaterally if the Troika delayed the situation.

By bearing the moral brunt, ayatollah Ali Khamenei, the Supreme Leader of the revolution, enacted a religious decree that proscribed the atomic bomb in the name of Islam [4]. Since there were no more arguments for the AIEA meeting scheduled on November 25, the United States launched immediately an information campaign.

In an editorial published on November 15 by the US World & News Report, a US Air Force intelligence officer stated that Iran had planned to kill the former chief of the Provisional Authority of the Coalition in Iraq, L. Paul Bremer III [5]. The attempt was supposed to take place on September 11, 2003, on the occasion of the terrorist attacks in New York and Washington. This option would confirm Tehran’s responsibility in those attacks for which Al Qaeda and Iraq were wrongly accused. In addition, it also indicated that Iran would finance Iraqi’s insurrection, even offer a 500 US dollars reward for the killings of American soldiers, etc. 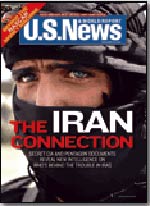 On November 17, the Mudejars of the people, an unreliable organization assisted by the Pentagon, held a press conference in Vienna and Paris simultaneously [6]. They stated that Dr. Khan, father of the Pakistani atomic bomb, sold highly-enriched uranium to Iran in 2001 [7]. The said information was refuted immediately by Pakistan [8]. The Mudejars also accused Iran of having a secret place where military experiments would be carried out.

However, two developments totally reversed the situation. On November 9, the Minister of Defense, Ali Chamkani, indicated that Iran had the capacity for a serial production of Chahab-3 missiles of 2 000 Km range. Tehran could then attack Israel in case of an armed conflict [9]. At the same time, Iran could supply eight unmanned mini-aircrafts drones (unmanned spy planes) to the Lebanese Hezbollah [10]. It managed to enter Israeli airspace quite far without being intercepted, thus putting an end to the Israeli legendary air control.

But, above all, while Washington observed the European maneuver, Tehran was negotiating another important alliance. Early 2004, Iran sold 20 billion dollars of liquified gas to China. On October 28, the Iranian Oil Minister Bijan Namdar Zanganeh, held an interview in Beijing with Cheng Geng, president of the National Oil Company of China. They both signed an agreement that authorized Sinopec Corporation to exploit the Iranian oilfield of Yadavaran. The Chinese could extract 10 million tons of natural gas annually for a period of 25 years. The said contract is valued roughly at 700 billion dollars.

Suddenly, China became Iran’s main partner, a country with which there was hardly trade links last year. Tehran laid its cards on the table and put an end to the mysteries about its intentions of not renewing its agreements with Japan, its main partner in the past, but servile to the United States, and focused more on China. Russia, which was informed about the transactions [11], welcomed this way out since it would meet the needs of its Chinese neighbor, something it had been unable to do totally [12] .

Surprisingly, the interests of Iran and China have complemented each other. The first one has been a great producer of hydrocarbons while the second a great consumer. The Chinese oil and gas technology is primitive, but the fields of Yadaravan are easy to exploit. Both States have had different areas of influence and historical relations since long ago through the “silk route”, but they are preparing themselves to face the United States, despite the fact that China has been absent so far in the region, except for its position in Sudan [13].

For Washington, it has been a strong blow. China and Russia will veto any draft resolution of the UN Security Council pertaining to sanctions on Iran, and even if the United States was able to convince the Europeans of suspending their trade relations with Iran, themeasure would be anodyne since it would be compensated by China. Besides, this new alliance strengthens Iran’s confidence in the region, not only in Iraq but also in Lebanon and the occupied Palestine. Now China has to be taken into account in the Middle East.

[5] The weekly newspaper released a special report on Iranian crimes: «The Iran Connection».

[10] The origin of drones (unmanned spy plane) was revealed by the daily paper al-Sharq al-Awsat, of London