France does not recover from its Algerian past

The Algerian FLN has interpreted the appointment of Philippe Douste-Blazy as the new french Minister of Foreign Affairs as a provocation. He is, in fact, the coauthor of a law that recently redeemed the colonization of Algeria. After six years trying to review their memories about that stage, France incurs repeatedly in contradictory actions without admitting the magnitude of the crimes committed. The reconciliation between both shores of the Mediterranean depends, however, and above all, upon the French reconciliation with their own history. 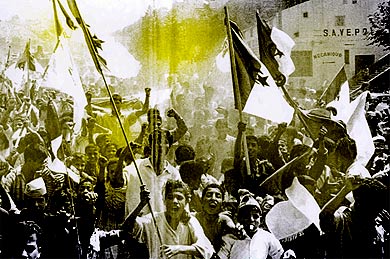 France is still suffering from a disease called Algeria. The gestures of reconciliation between both Mediterranean shores are mixed with nasty words. Let us look into the most recent incident. In the French law of February 23, 2005, which provided “the recognition of the nation and national contribution in favor of the repatriated French”, a law that Michele Alliot-Marie had conceived as the last stage of a “duty of memory and truth ”, was inserted an amendment that annoyed the French historians and, later, the main party in Algeria.

On June 7, 2005, the FLN issued a press released signed by its secretary general, Abdelaziz Belkhadem, who is also personal representative of the president of the Republic, Abdelazz Buteflika. According to the press release, the party “is against such law, that ratified a retrograde vision of the history, and strongly condemned the attempt of justifying the barbarity of the colonization wiping out the most horrible actions, like the extermination of the peoples and tribes, collective fires, mass deportations of entire displaced populations and reduced to slavery, the massacres of May 8, 1945, the repression of the October rallies in 1961, unpunished crimes of the OAS and, in general, all the abuses against innocent civilians”.

How and why a draft friendship treaty between both countries, whose principles were set out during the visit of Jacques Chirac to Algeria, in March 2003, and whose signing should have taken place soon, could have become this expression of exasperation?

In this matter of our article, and to dispel any ambiguity about our intention, it is important to recall our method. We are just trying to understand the world that surrounds us. Therefore, we separate, by principle, the study of facts and behaviors, the clinical analysis of them by being as neutral as possible, the moral judgment that could be drawn depending on the specific situation and moral that is professed.

The French regained their memory very slowly. We had to wait for Maurice Papon’s trial to be held in order to hear about the massacre in Paris in October 1961. We also had to wait until the law of October 18, 1999, for the French authorities to admit to describe the “events in Algeria” as “war of Algeria”.

The first Algerian Head of State received in the seat of the French National Assembly, Abdelaziz Buteflika, stated on June 14, 2000: “Venerable institutions like the Church, States so old like yours, Mr. President, do not hesitate today in admitting the mistakes, and sometimes the most horrible crimes, that they made sometime in the past. From Galileo Galilei to the Holocaust, that tottered the foundations of the human condition, all those analysis of the history represent an invaluable contribution to the ethics of our times (...). Its value would increase if they are continued and extended to other contexts. Colonization, in particular, cannot be ignored. The fact that you have taken the war of Algeria, calling it by its name, out of the moats of what has never been spoken, the fact that your educational institutions are carrying out a rectification process, in the school books, pertaining to the image that is sometimes distorted of certain episodes of the colonization, represent a step forward in the deed for truth that you have started to foster, for the good of the historical knowledge and equity cause among men.”.

Two days later, when president Buteflika himself expressed his views about the past, his message was rejected. The Algerian president justified to maintain the measure of expulsion of the Harkis, that is, the Algerians who fought on the French side in the Algerian war, comparing them with the «collaborateurs» [Collaborators, name used in France to call the French who collaborated with the Hitlerian troops during the German occupation, in the Second World War. Translator’s note].

President Chirac, who is currently reviewing his lucid past, was following the spirit of the time when he reacted, in April 2001, at the publication of the General Aussaresses’ memories. In his book Services spéciaux, Algérie 1955-1957, Paul Aussaresses described the practice of torture and claimed his responsibilities. He stated to have acted on the orders of superiors and successfully fulfilled his duty; condemned those actions but not the fact of having obeyed the orders. He was then publicly condemned by the commander-in-chief of the armed forces, who could not accept such example of a superior officer when the new Code of the Armed Forces obliged the militaries not only to reject this type of orders but also to arrest those who instruct them or get involved in their execution. Aussaresses was also forbidden to continue bearing the insignia of commander of the Legion of Honor and was sentenced later by the court on the charges of supporting war crimes. This sentence hindered, however, a vision of that period and compensation of facts. _As may be observed, the scandal that took place in France had no equivalent in Algeria. In an interview given to Jean-Pierre Elkabbach for the Public Sénat television, president Buteflika, far from getting blinded by Paul Aussaresses’ testimony, simply stated that the General had “fulfilled with honor his duty as an officer”. _A book about the French crimes is considered then a historical document in Algeria, but in France is an obscenity. Paradoxically, the Algerian victims viewed the rulings of the French courts, which expressed a collective remorse, as a negativism. We are facing then the same contradiction as in the case of the Harkis. The French considered unacceptable that the Harkis be compared with the «collabos» [Please see above the Translator’s note, while the Algerian easily accepted that the Harkis themselves be considered, from the French point of view, as “loyal servants to the nation”.

On the occasion of the opening of the National Memorial of the Algerian War, the Moroccan and Tunisians combatants, on December 5, 2002, president Chirac wanted to establish a foundation for the Harkis. Taking that opportunity, Jean Leonetti and Philippe Douste-Blazy, who were then deputies, wanted to make the French Republic to acknowledge “the positive work of our fellow citizens who lived in Algeria during the period of the French presence” [1]. Such formulation simply meant to judge as positive the bloody colonization of Algeria and, given the situation of the parliamentarian works, it was inserted, upon UDF request, in the law of February 23, 2005, whose initial objective was to recognize at last the Harkis’ contribution and compensate them. It was even stated that it was compulsory to teach in the schools that “positive work”.
The parliamentarians were also able to adopt another amendment that punished all kinds of insults against the Harkis, that is, it was later forbidden the comparison with the “collaborateurs” that Buteflika had used in the previous years.

That implied that France, which did not accept anyone to speak of the crimes it had ordered, denies now the existence of such crimes. This regressive behavior disappointed the Algerians, bearing in mind especially that the composition of the new French government is not reassuring at all for them. It is evident that the current Prime Minister, Dominique de Villepin, encouraged the Plon/Perrin editions before the General Aussaresses’s book was published and changed the cascade later condemning its publication. His impatience to clear up the matters had come up against the blindness of his own majority. As for the Minister of Foreign Affairs, Philippe Douste-Blazy, he is precisely the coauthor of the restoration of the colonization. A lot of time will be still needed to heal the wounds.

Source : “France does not recover from its Algerian past”, by Thierry Meyssan, Voltaire Network, 17 June 2005, www.voltairenet.org/article30410.html

Source : “France does not recover from its Algerian past”, by Thierry Meyssan, Voltaire Network, 17 June 2005, www.voltairenet.org/article30410.html