Russia’s place in the Islamic world

The Russian Federation is not only a european state with an orthodox christian population, it is also an asian state with a muslim population. While part of the russian leading class sticks on to its monoethnical, uncompromising positions and fuels the war in Chechnya, president Putin and his main man, Chechnyan Vladislav Surkov, try to integrate Russia into the islamic states arena. Professor Akhmet Yarlykapov analyses the muslim russians’ point of view. 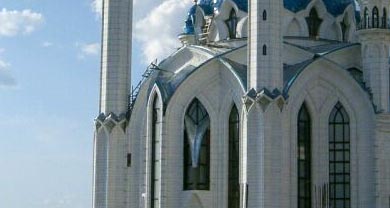 Later this month, Foreign Minister Sergei Lavrov will take part in a session of foreign ministers of the Organization of the Islamic Conference (OIC). In the past few years, Moscow has intensified contacts with the OIC in response to the growing needs of its 20-million-strong Muslim community.

Muslims have lived in Russia for centuries, while Islam itself is even older than Orthodox Christianity. Russia therefore has good reason to see itself as part of the Islamic world and be actively involved in discussions of its problems. Many pressing problems for Muslims throughout the world - from extremism to Islamophobia - are also relevant to Russians. Thus, OIC-sponsored discussion of the problems facing the Muslim world will also be useful to Russia.

The first problem facing Russia’s Islamic community is a lack of unity. Sunni Islam has traditionally been dominant in Russia in interpreting the Hanafite and Shafiite theological schools of law “mazkhabs”. Followers of the Shafiite mazkhab live mainly in Chechnya, Ingushetia and Dagestan, while residents of the North-West Caucasus, Tatarstan, Bashkiria and other regions adhere to the Hanafite mazkhab. A considerable number of Azerbaijanis are Shiites. However, recently the situation has changed, as migration from the North Caucasus to other regions and a considerable inflow of Muslim migrants from CIS countries have created tensions inside the Islamic community between various ethnic and cultural groups.

However, these are not the only causes of friction. Many regions are increasingly experiencing a generation gap, and younger Muslims have created parallel structures that their opponents immediately label Wahhabite. In addition, supreme mufti Talgat Tadzhutdin, chairman of the Muslim Board for Russia, and sheikh Ravil Gainutdin, chairman of the Muslim Board for European Russia, have been vying for the leadership of the country’s Islamic community for several years. In 1999, muftis from the North Caucasus created the Coordination Center of Muslims of the North Caucasus mainly in order to oppose attempts by Tadzhutdin and Gainutdin to win them over to their side. The Russian Council of Muftis is also split.

This is all accompanied by a systemic crisis among Muslim boards generally. Created under Catherine the Great in the 18th century to facilitate control of the Muslim subjects of the Russian Empire, the boards remained just bureaucratic structures, and unfortunately have practically no control over the real situation in the provinces.

There is no permanent dialog between the state and the country’s political forces on the one hand and Muslim leaders and organizations on the other. These contacts are supposed to take into account the diversity of the forces represented in Russia’s Islamic community. However, so far everything boils down to contacts between the authorities and the Muslim boards.

Yet another problem is the spread of radical and extremist views among the believers. Many things are needed in order to combat this, such as training of mullahs. A system of Islamic education to train mullahs and imams capable of opposing radical and extremist propaganda has yet to form, and steps in this direction are often unsystematic and illogical. For example, in Karachai-Circassia there is an Islamic University, but practically all mektebs (primary schools attached to mosques) and medresehs (secondary schools) are closed.

The situation is being aggravated by uneven development of religious life in Islamic areas. For example, while over 1,700 mosques have been built in Dagestan, with a dozen Islamic higher schools and hundreds of mektebs and medresehs functioning there, in Adygeya there are less than a hundred mosques and no Islamic educational establishments.

This is only a short list of problems facing Russia’s Islamic community, including natural problems of the process of restoring the religious life of Muslim believers. Much has been done over the past 15 years of a rapid Islamic revival in Russia, but we are only at the beginning of the road. Cooperation with Islamic communities in other countries and Muslim organizations such as the OIC are a must.

Senior research fellow at the Russian Academy of Sciences’ Institute of Ethnology and Anthropology, for RIA Novosti.