London goes back to the strategy of tension

The leaders of the Coalition took advantage of the terrorist attacks in London to denounce, once more, the existence of an Islamic conspiracy and make a call to fight terrorism. However, facts speak for themselves: the operation was organized in the guise of an anti-terrorist exercise in which British public order forces were supposed to participate. Like in the 1980s, when the Anglo-Saxon secret services would organize bloody attacks in Europe to instil fear for Communism in the population, an Anglo-Saxon military group activates the strategy of tension to cause the “clash of civilizations”. 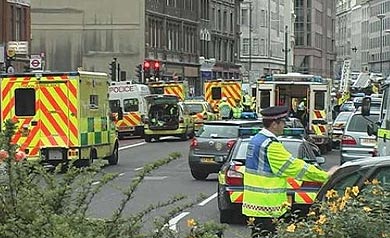 Understanding an event depends on its context, although the latter is defined according to our previous understanding. Sometimes, actually often, what we see only confirms what we thought we knew. That’s the way it is regarding the bomb attacks in London on July 7th, 2005: they confirm our prejudices to the same extent that their violence stun us. For some people, the attacks in London show, once again, that the Islamists want to destroy the civilization and that, since the attacks in Madrid, they are attacking Europe. For others, on the contrary, they are - along with the attacks in Madrid - a punishment for the Coalition’s colonialism. For other people, including me, they are just another operation in the tension strategy conducted by the Anglo-Saxon industrial-military complex.

With amazing perseverance, since September 11, each analyst follows his own reasoning without analyzing the facts. However, it is not reasonable to believe that time does not allow us to disregard certain hypotheses, that it does not deny some of them.

Let us examine the inner logic of the three positions mentioned above.

This belief is based on a series of communiqués to claim responsibility, none of which has been verified.

In the absence of material elements to prove the existence of Al-Qaida, certain leaders of the Coalition have decided to define it, not as a well structured organization but as an ideology around which dispersed groups move. If that were the case, we would have to admit the lack of a formal relation among the 29 operations above mentioned and also that there is not any other tie among their respective perpetrators than an ideological one.

Unfortunately, this reasoning has a circular nature: this hypothesis can not be confirmed as in most of the cases it has been impossible to identify the authors of the attacks and nothing is known about them at all.

Some scholars, whose investigations are vastly financed by the States of the Coalition, that there is an international Jihadist movement in which it is possible to recruit the perpetrators of the attacks. However, it has not been possible to prove the existence of clear links between that movement and all the attacks. The main difficulty is that the attacks have nothing in common, except for the unverified communiqués claiming responsibility. It is not even definite that all of them can be described as “terrorist” attacks. In effect, far from attempting to sow panic among the population, the attack against the Cole destroyer was against a military target, and the attack that took the live of Sergio Vieira de Mello was a classical political assassination. Some of the attacks included in the list are settling of scores among rival states, like the attack in Karachi against French engineers that sought to exclude France from the sale of weapons to Pakistan, or the one carried out against French oil tanker Limburg off the coast of Yemen, which sought to dissuade France from modifying the final destination of oil shipments.

In sum, the theory according to which these attacks would have had only one financier is not based on any verifiable element. It allows the Coalition to justify its military deployment but it explains it in completely confused terms. The rhetoric of the “war on terror” is effective with regard to communication to the same extent that it is senseless. Terrorism is not an enemy but a combat technique. Therefore, it is impossible to defeat terrorism but it is possible to indefinitely use this rhetoric to justify the continuation of military operations in all fronts.

Developing a speech about terrorism based on cases that have not been clarified, with Al-Quaida claiming responsibility, leads to defining terrorism exclusively according to these operations. Therefore, all the other attacks are excluded, perpetrated in Colombia or China, to get to the equation “terrorism=Muslim” and to generate the paranoia of the world Islamic conspiracy. 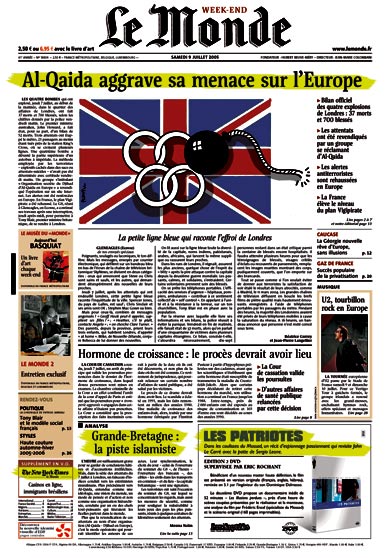 The theory according to which the attacks in London were perpetrated by Islamists linked to Al-Qaida is then relegated to the propaganda tricks. As an example, I can not resist the temptation to reproduce, as an illustration of this article, the front page of the Le Monde news daily of July 9th, 2005. The main headline contradicts the article lower in the same page.

To its left, there is a headline of the English version (supplement) of Le Monde, by the New York Times and, to its right, there is an ad about a DVD glorifying the Mossad (Israeli Intelligence).

The two other interpretations of the London attacks do not mix the latter with the series of violent actions above mentioned. The fact that we do not understand all these events does not mean that are necessarily linked.

For those who oppose the war, the attacks are a punishment for the invasion. The Spanish and the British took the war to Baghdad and the Iraqis responded in Madrid and London. Or, as there is no evidence of any Iraqi involvement in those attacks, those attacking the capitals of the countries of the Coalition are Muslims in solidarity with the Iraqis rather.

It is possible, but, it is precisely in that case that the hypothesis of manipulation becomes more valid.

In effect, rather than the litany of deeds of Al-Qaida, the attacks in Madrid and London remind those in Bologna. [1], in 1980. Then, the stay-behind networks of the Atlantic Alliance, jointly headed by the United States and Great Britain, organized an attack in a train station to create political tensions that would favor a toughening of the Italian government. Of course, the stay-behind network acted behind the back of Italian authorities, using agents within the Italian secret services and recruiting perpetrators among extremist political movements.

The attacks in London coincided, in time and place, with the carrying out of an anti-terrorist exercise organized by the firm Visor Consultants. According to the testimony of the director of the firm, Peter Powell, recorded by ITV and which is available in our website, those heading the exercise from the headquarters realized that the script they had planned was “truly” taking place in front of their eyes. The deployment of firemen as part of the exercise, before the explosions, explains the speed and effectiveness of the aid actions.

In other words, if the surveillance cameras did not “see” those who planted the bombs it was because they were wearing uniforms. And NATO’s stay-behind network [2] is the only one that has agents within the public order forces.

The tension strategy seeks to impose the “clash of civilizations” so that Europeans support the wars of the Coalition in the Muslim world. [3]. This strategy also favors toughening democracies (hence the opening of files on the people that has been so difficult for Tony Blair to impose in his own country and in the European Union).

In addition, the synchronization of the attacks in London with the beginning of the G-8 meeting in Scotland should alter the agendas of the summit, thus relegating issues like global warming or assistance to the development of Africa and giving priority to others topics relating to security, as it effectively happened.

However, by twisting the arms of the G-8 leaders, the financers of the attacks perhaps went too far. Some heads of state and government could be considering that, in the future, adopting the rhetoric of the war on terror could have more disadvantages than advantages.

Source : “London goes back to the strategy of tension”, by Thierry Meyssan, Voltaire Network, 19 July 2005, www.voltairenet.org/article30617.html

DSK soon to be set free

Obama, financial war and the elimination of DSK

Regime Change at the IMF: The Frame-Up of Dominique Strauss-Kahn?

Dominique Strauss-Kahn and Salam Fayyad at the Herzliya Conference

Source : “London goes back to the strategy of tension”, by Thierry Meyssan, Voltaire Network, 19 July 2005, www.voltairenet.org/article30617.html