Argentina: From Falklands Blitz to ‘Treaty of Versailles’

Today, 2 April 2012, marks the 30th anniversary of the outbreak of the Falklands (Malvinas) war between Argentina and the United Kingdom. Adrián Salbuchi analyses the bitter long-lasting consequences of Argentina’s capitulation to the Empire. Before being considered as best pupil of the IMF in the 1990’s, Argentina had already sealed her fate as a laboratory for the treacherous new US/UK brand of "democracy" with the signing of the Treaty that "ended" the state of war but ushered in the wholesale foreign privatization of her national resources and the loss of her sovereignty. 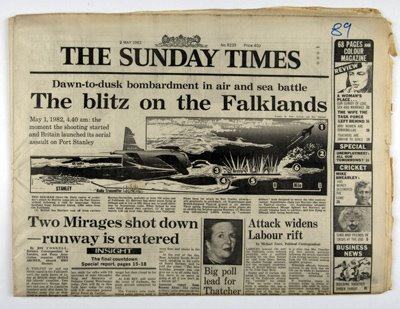 Thirty years ago, Argentina’s ruling regime occupied the Falkland/Malvinas Islands, only to surrender 74 days later to Margaret Thatcher’s Task Force. The defeat paved the way for Argentina’s very own degrading “Treaty of Versailles.”

Many may remember how Argentine General Leopoldo Galtieri’s ruling Junta occupied the bleak Falkland/Malvinas Islands. Maggie Thatcher immediately responded by deploying a 127 military and merchant vessel war flotilla. The flotilla was spearheaded by the aircraft carriers Invincible and Hermes, which were loaded with dozens of fighter jets to take the islands back. Or perhaps how US president Ronald Reagan’s Secretary of State General Alexander Haig pretended he was a “mediator” in the conflict.

All the while, Defense Secretary Caspar Weinberger was releasing billions of dollars worth of war material and supplies – aircraft, missiles, night goggles, millions of gallons of fuel, combat gear, and logistical support. America’s urgent support of Britain’s war effort also included the use of military satellites and US installations on Ascension Island in the Atlantic, located half way between London and the Falklands. War

Many will also remember the bloody battles in the war zone that began on 2nd May 1982, when the British nuclear submarine Conqueror was ordered by Downing Street to sink the Argentine cruiser General Belgrano. The strike resulted in the loss of 323 sailors, despite the fact it was sailing outside Britain’s unilaterally declared “Exclusion Zone” around the islands – well away from the theatre of war. Shortly thereafter, Argentina damaged many scores of British vessels, sinking the Sheffield, Atlantic Conveyor, Coventry, Ardent and Antelope. In the end, 649 Argentine and 255 British troops died. The rest is history…

Thirty years on, we hear echoes of that conflict in Argentine president Cristina Kirchner’s and British PM David Cameron’s vulgar bickering over oil prospecting, oil rights, sovereignty, decolonization and the “remilitarization” of the South Atlantic. As we said in our 11th February RT article “British laughter in the Falkland Islands”, this is “much ado about nothing…”

Because the real crux of the matter is this – as with all nations defeated at war by the UK, US, and its allies – Argentina too had to suffer its “Treaty of Versailles”, much as defeated Germany suffered in 1919 at the end of World War I when they were made to bite the dust by those same victorious allies. The humiliating conditions caused such dreadful economic, financial, social and political devastation ensured Adolf Hitler and his movement would find massive popular support a few years later… Here too the rest is history…

But the Allies have learned many lessons since then. As with Germany, Austria, Japan, Italy and Iraq, Argentina too was punished. However, instead of outright military invasion, Argentina was made to swallow a different but just as bitter pill. The US/UK-brand of “democracy” was imposed on us, lavishly financed by the Global Power Masters and their local satraps and forcefully drilled into every Argentine brain by the local and global mainstream media.

When that “democracy” was installed in December 1983, successive presidents from Raúl Alfonsín (“Mr Hyperinflation 1989”), through Carlos Menem (local manager of Argentina’s “Treaty of Versailles”) and Fernando De la Rúa (“Mr. Financial Meltdown 2001”), up to Nestor and Cristina Kirchner over the past nine years, all guaranteed the Global Power Masters that three things would happen:

(1) Argentina would always kneel before its victorious vanquishers;

(2) Argentina would never ever investigate the illegal origin of its sovereign debt under the generals, but instead would pay, pay and pay even more, and

(3) Argentina would dismantle, disintegrate and destroy its armed forces in material and moral terms, so that in practice we have become a totally unarmed nation.

All of that stems from Argentina’s “Treaty of Versailles”.

Thus president Alfonsín had thousands of military officers publicly tried for human rights violations; a necessary task no doubt, but the vast, long-term PsyWar exercise that followed resulted in the general public hating its military institutions rather than individual culprits. This all but destroyed the military. Also, imagine what would happen if US, British, French and Israeli military officers were publicly tried for their mass murders in Africa, Vietnam, Iraq, Afghanistan, Libya, Serbia, Panama? No, no, that’s only done to defeated armies: German, Italian, Japanese, Arab, Argentine. And of course, one can expect the teary Hollywood History-Fiction movie to follow.

Actually, Argentina’s Versailles has its own name: “The Anglo-Argentine Investments Promotion & Protection Treaty”, which was signed in London in December 1990 and sanctioned on 4/11/1992 by Argentina’s Congress as Law No. 24.184. It crowned a long series of talks held between Argentina and the UK, which in February 1990 had led to a formal Agreement whereby then president Carlos Menem and his foreign minister – notorious Trilateral Commission member and Rockefeller/Soros protégé Domingo Cavallo – would act as local managers promoting British and US interests.

That Agreement and Treaty gave Britain control over Argentina’s armed forces, especially in the immensely wealthy Patagonian Region where there are vast US, UK and Israeli investments (Art. 5). Our economy was to be completely and fully deregulated (Art. 12), whereby public companies were sold off and privatized at bargain prices (oil, mining, railways, highways, airlines, electricity, gas and water utilities, pension funds, postal services, insurance and reinsurance, banks….their war cry seemed to be: “if it moves, privatize it!”), and foreign “investors” were given the fullest protection, rights and assistance.

That Treaty with the UK was quickly followed by similar ones with the US (Law No. 24.184) followed by France, Germany, Spain, Holland, Denmark, Sweden, Canada, Australia…

President Menem was definitely Britain and the US’s best weapon against Argentina. His foreign minister Guido Di Tella would go as far as stating that Argentina had “carnal relations” with the US… And you can guess who was on top! Some key milestones leading to our “Versailles”:

August 1989: Argentine “State Reform Act” (Law No. 23.696) is sanctioned, paving the way for privatizations and deregulation by recycling junk status Argentine sovereign debt bonds. The bonds, which ended up in global bankers’ hands (at their full value no less!) were used to purchase public assets;

November 1989: The Queen opened Parliamentary Sessions, specifically referring to the reestablishment of diplomatic relations with Argentina and the major business opportunities that represented for British commerce and corporations;

November 1989: Lord Montgomery heads a UK Trade Mission to Argentina to survey the inventory of state companies, mineral, oil, and other resources. He left with a big smile on his face!

1991: Domingo Cavallo, now finance minister, engineered with US treasury secretary Nicholas Brady the so-called “Brady Bonds”. They were so good for global bankers that when George Bush Sr. lost the 1992 presidential election and Brady was out of a job, he set up a private sovereign debt consultancy partnering with Daniel Max, Mr Cavallo’s key public debt negotiator.

The moral of the story…

It’s much better (and easier) to avoid outright military invasion of defeated nations, imposing instead upon them the US/UK brand of “democracy”. This is achieved by financing the worst and most treacherous local politicians, pushing them into powerful positions such as presidents, ministers, senators, deputies, judges and governors. Then, all you have to do is make sure they do what you want. It’s called “democracy” and it works really well… for the Global Power Elite! Oh, and also make sure that the local media never ever remind the public:
(a) That they have been defeated,
(b) That a “Treaty of Versailles by any other name tastes just as bitter”, and
(c) That US/UK-brand of “democracy” is a very dangerous Trojan horse.

Author, economist, and expert on globalization, founder of the Argentine Second Republic Movement.

’Does the European Union have an Expiry Date?’

A Message from Argentina: Our Sympathies to the People of Greece!

False Flag Attacks in Argentina: 1992 and 1994
Debunking the Islamic Trail