Will France sell its warships to Russia?

Carried away by its own discourse on the independence of Crimea and its adhesion to the Russian Federation, France is trying to come up with sanctions against Moscow. In this perspective, and while Prime Minister Jean-Marc Ayraut had told his Foreign Minister Laurent Fabius that the "Mistral" amphibious assault ships should not be messed with, on 17 March 2014, the latter spoke on a TF1 broadcast about the possibility of cancelling the contract: there is no question that France will arm an expansionist Russia.

However, as we had earlier noted in these columns, the acquisition of the "Mistrals" by the Russian Ministry of Defense makes no sense from a Russian standpoint: they neither correspond to the needs of the Russian army, nor to their combat techniques. This decision was made by former Minister Anatoly Serdyukov, currently under prosecution for the fraudulent sale of military property. The aim was to procure substantial bribes for both then Presidents Dmitry Medvedev and his French counterpart, Nicolas Sarkozy, to enable them to fund their respective presidential campaigns [1].

Although the contract was renegotiated several times, it still remains economically very unfavorable. Russian shipyards, which have grown considerably since then, would now be in a position to manufacture them at half the price. Therefore, Russia would welcome this sanction with relief and France should be able to find another buyer for its vessels almost completely built, valued at 1.2 billion euros.

This contract was the largest ever concluded between a Member State of NATO and Russia. 400 Russian sailors are expected to arrive in France soon to train on these boats. The first vessel is scheduled for delivery in 2014 and the second in 2015.

The construction of the "Mistrals" has provided jobs to more than a thousand people for the past four years at Saint-Nazaire, a city near Nantes where Prime Minister Jean-Marc Ayrault was once the mayor. 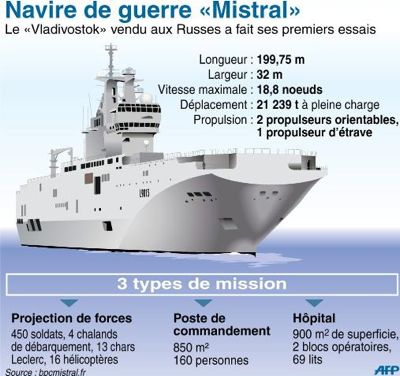