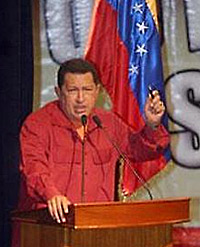 Chavez made the announcement during a ceremony making the creation of 125 Social Production Companies that are part of Venezuela’s complex of state-owned mining and metal production and processing, the Venezuelan Corporation of Guyana (CVG).

Instead of providing mining concessions to foreign or domestic companies, Venezuela plans to create a national state-owned mining company that would take charge of all mining activities in the country. “We are going to launch a national mining company of our own – we do not need [outside] investment,” said Chavez. Foreign companies must respect Venezuela’s constitution and pay their taxes, stated Chavez, and if they don’t, “they should leave. We can manage on our own.”

Since late last year the Chavez government has been engaging in an effort to get transnational companies doing business in Venezuela to pay more taxes and royalties on their oil production activity. Also, it is forcing companies to enter into joint ventures with Venezuela’s state-owned oil company PDVSA, where foreign companies would hold a maximum 49% ownership. Venezuela’s Ministry of Energy and Petroleum says foreign companies owe as much as $3 billion to the Venezuelan state in back taxes.

Venezuela currently has mining concessions granted by previous governments with the U.S mining company Hecla Mining and the Canadian company Crystallex. According to Crystallex’s CEO, Todd Bruce, the creation of a Venezuelan state-owned mining company would not affect its contract to mine in Las Cristinas, as it would be administered by the new mining company, since its mining activities do not constitute a concession.

“The Las Cristinas deposit is indeed owned by Venezuela and administered through the CVG, which is a regional natural resource development arm of the central government,” Bruce said. “The CVG has contracted Crystallex . . . Our contract is founded and premised upon the ownership of the resource by the Republic of Venezuela.”

The Las Cristinas mine is expected to produce about 300,000 ounces (8,400 kg) of gold per year. Crystallex intends to invest $256 building the mine and a processing plant. The deposit is estimated to hold over 10 million ounces of gold, which makes it one of the largest gold deposits in Latin America. Venezuela currently produces about 20,000 kg of gold per year.

A conflict has developed, however, with local indigenous groups, which argue that Las Cristinas would cause environmental damage and disrupt indigenous communities. Other conflicts in the region involve largely illegal small miners and Crystallex. National Assembly Deputy Pedro Jimenez Flores said that the National Assembly would investigate the conflicts.