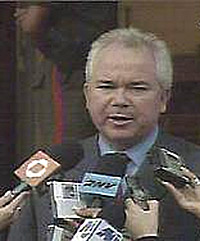 The report that Venezuela was interested in purchasing a nuclear reactor from Argentina originated with an AP summary of a news story in the Argentinean newspaper Clarín. According to this report, diplomatic sources had told the Clarín that the request had been made during a meeting last August 29. The reactor type, known as CAREM, is of medium capacity and would be used only for peaceful purposes.

Ramirez, making his comments to the press following a cabinet meeting, said, “there is no negotiation [for the purchase of a reactor]. There are agreements for scientific cooperation, that is, for technological exchange and research development. But there is no concrete agreement for the acquisition of anything having to do with the generation of atomic energy.”

Ramirez pointed out that Venezuela is indeed interested in nuclear technology, but only for training and for medical purposes. “Venezuela will bring itself up to date in the area of atomic energy,” said Ramirez.

According to Ramirez, Venezuela was one of the first countries of Latin America to have a nuclear reactor, which was a pilot reactor. Nuclear technology, however, was given little attention in the past few decades in Venezuela and now the Chavez government is interested in updating itself in this area.

Argentina and Brazil are both countries with advanced nuclear capabilities Ramirez reminded the press. According to DPA Argentina has exported reactors to countries such as Australia, Peru, Algeria, and Egypt.