Ministry of Popular Economy will promote small businesses and cooperatives

More than a thousand persons finishing the “Vuelvan Caras” training and employment program, will be guided by this new ministry to form self sustainable production units. Minister Elías Jaua said that the purpose is to strengthen a kind of alternative, non traditional form of production. 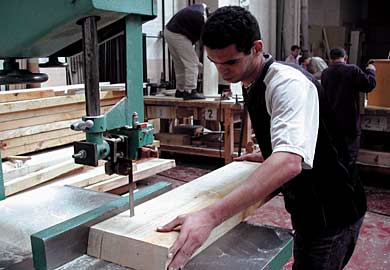 With the purpose of creating an alternative economy; one that provides opportunities for the sectors of the population heretofore excluded from the productive system, Hugo Chávez’ government has created the Ministry of Popular Economy, under the direction of Elías Jaua, an ex-member of the Constituent Assembly, who also presided the Intergovernmental Fund for Decentralization(Fides), an entity that allocates Venezuelan state resources to the regions.

This new ministry will project and coordinate policies to promote new entrepreneurs in order to establish small businesses, cooperatives, and self sustained production units that contribute to the well being of the population as a whole.

There are currently 1.8 million unemployed in Venezuela, according to official figures from the National Institute of Statistics. At the beginning of the year, the government announced the program Vuelvan Caras, that seeks to train that part of the population that is unemployed and at an age at which they can work in strategic areas like agriculture, textiles, clothing confection, crafts, mechanics, service to the client, various services, construction, and tourism, among others. In seven months, a total of one thousand people have been trained throughout the country.

The new ministry will guide this group of citizens to create production units on a collective basis.

Minister Jaua explained that it’s not a matter of forming payrolls of employees who receive a wage, but of creating new entrepreneurs that can guarantee the provision of services(regardless of the political situation), and organize communities to form business centers that allow them both to make a living and to provide a service for the low income population.

The decree that creates the new ministry stipulates that it will regulate, formulate, and follow up on policies, and carry out governmental activities that promote citizen participation in a popular economy.

Additionally, the ministry will evaluate the results of the popular economy policies, that had been so far relegated to punctual programs with no relevant outcome.

It will also define mechanisms for the participation of the public and private sectors in the design and execution of plans for the benefit of the communities.

Published in Quantum No.33

The agricultural industry, willing to struggle against poverty... and to join the Mercals
Wholesale and retail food sales increased 7%