Venezuelan officials, including the Vice-President, Venezuela’s Ambassador to the U.S., and the President of Venezuela’s National Assembly, emphasized the ridiculousness and irrationality of Pat Robertson’s latest comments about Venezuela that he made on CNN. 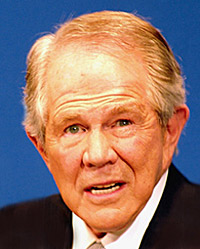 Last night, on CNN’s Late Edition, Pat Robertson said of Venezuela’s President Chavez, “This man is setting up a Marxist-type dictatorship in Venezuela. He is trying to spread Marxism throughout South America. He is negotiating with the Iranians to get nuclear material, and he also sent $1.2 million in cash to Osama bin Laden right after [the terrorist attacks of] 9-11.” Robertson would not say what his sources for his claims were, but speculated that sometime soon the U.S. could face a nuclear attack from Venezuela.

In August, Robertson, who is a prominent televangelist and former candidate for the Republican party’s nomination for president, said he believed that the Bush administration was not doing enough to oppose Chavez and that he should be assassinated. Robertson later apologized for the comment and said that Chavez should just be kidnapped. Robertson’s latest comments generated a new wave of vehement rejections from Venezuelan officials. Vice President José Vicente Rangel said about Robertson, “This guy is crazy.” “He should be submitted to a team of psychiatrists and psychologists.” Rangel went on the say that Robertson’s political analysis is so irrational that, “political analysis cannot provide a rational response.”

Rangel reminded people that despite Robertson’s irrationality, one should keep in mind who is behind Robertson, which is President Bush. Robertson is “the spiritual councilor of the occupant of the White House,” said Rangel. Also, he is the one who “got Bush out of Alcoholism.”

Venezuela’s ambassador to the U.S., Bernardo Alvarez, who is currently visiting Caracas, said that Robertson lacks any credibility and is someone who, “permanently violates the commandments,” because he previously urged the murder of a president and is now lying about Venezuela. Alvarez also clarified that the accusation that Venezuela provided $1.2 million to Osama bin Laden is an old accusation that a U.S. court dismissed a long time ago.

The accusation was based on the suggestion that $1 million Venezuela provided for Afghan refugees, via the United Nations High Commissioner for Refugees, actually went to Osama bin Laden’s group. Alvarez emphasized that the money has been accounted for beyond any doubt.