The war in Syria has shown that when it comes to conventional weapons, the US Armed Forces are no longer the top dog. Russia is now in control. Moscow has brought a new resource onto the war pitch: the most recent generation of hypersonic nuclear carriers. This introduction should see Russia getting ahead of the United States in nuclear warfare. Unwilling to lag behind and seeking to make up lost ground, the Pentagon intends to profit - in as much as time remains for it to do so— from its quantitative superiority, to impose its choices on Russia and China. 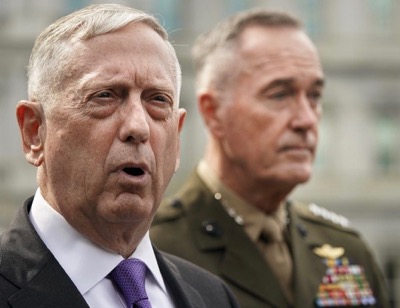 General James Mattis (Defense Secretary) and Joseph Dunford (President of the Committee of Chiefs of Staff).

The influential Council on Foreign Relations’ journal, Foreign Affairs, has just crudely exposed the current debate on a nuclear war that the US could let unfurl against Russia and China [2].

First, there is the article by Elbridge Colby, one of the main authors of the Pentagon’s National Defense Strategy [3]. This declares that the war currently being waged against terrorism will come to an end and the Great Powers will once again compete inter se. The motto is: “if you want peace, prepare yourself for nuclear war” [4].

Colby, Joint Under Secretary in charge of strategy and developing the force, provides: all confrontation with Russia and China could become nuclear if during the a battle that is becoming tougher and more uncertain, each fighter was tempted to seize his nuclear sword to test the resolve of his adversary, to rise to the challenge, or quite simply to be able to continue the fight.

Colby’s logic is that the best way to avoid a nuclear war is to get ready to deliver a limited one (sic); and the US is ready to carry out effective, contained nuclear operations (sic).

André Damon, from the Trotskyite website WSWS [5] revisits Trump’s threat to withdraw the US from the INF Treaty (Treaty on Medium Range Nuclear Weapons) [6], that prohibits the US and Russia from developing missiles with a range of between 500 and 5,500 km.

Damon considers that Trump’s threat endangers the lives of millions of people in Europe and East Asia by planning a cross fire against Peking and Moscow. And the USA does not hide its desire to have total discretion in its use of nuclear weapons in its wars so that it can conquer its “adversaries”.

Damon adds that these plans are made in secret with the complicity of the New York Times and the Democratic Party which has stayed almost silent on the consequences and danger of a World War.

George Shultz, the powerful Secretary of State when Republican Ronald Raegan was the US President, defends the INF: “we have to preserve this nuclear treaty [7]”.

Shultz remarks that nuclear weapons pose a threat to the whole world and pro ceeds to defend Ronald Raegan then the Republican President, and Mikhaïl Gorbatchov, the leader of the former USSR signing the Treaty in 1987 [8].

He criticizes Trump’s threats to abandon the INF, threats based on the pretext that Russia has violated it. Shultz exploits the occasion to invite other countries to sign up to the treaty and to resist the US temptation to develop new types of lethal weapons; he proposes that, as a preliminary step, a meeting of experts from the US and Russia be held to discuss possible violations.

At the time, the treaty provoked a high degree of sceptism but George Schultz sustains it has been possible to carry out “extensive on site inspections to check that all the weapons that had been banned, had been eliminated“ and that by 1992, some 2,700 missiles had been destroyed [9].

Shultz recalls that the Revision of the US Nuclear position [10] provided: “the US remains committed to its efforts to support global elimination of nuclear, biological and chemical weapons”.

The US has reduced its nuclear reserves to 85% of what it had during the Cold War, and it has not deployed new nuclear capacities for more than two decades” [11]. Ronald Raegan’s Secretary of State concludes that now is not the time to build massive arsenals of nuclear weapons. Now is the time to eliminate this threat from the whole world.

The worst would be to think that Russia and China are going to wait with their arms folded.

[2] “What’s Inside. Nearly three-quarters of a century into the atomic age, it is sobering to consider how little we really know”, Gideon Rose, Foreign Affairs, November/December 2018.

[4] “If You Want Peace, Prepare for Nuclear War. A Strategy for the New Great-Power Rivalry”, Elbridge Colby, Foreign Affairs, November/December 2018.

[9] “Factsheet INF Treaty: At a Glance”, Bureau of Arms Control, Verification and Compliance, US Department of State, December 8, 2017.