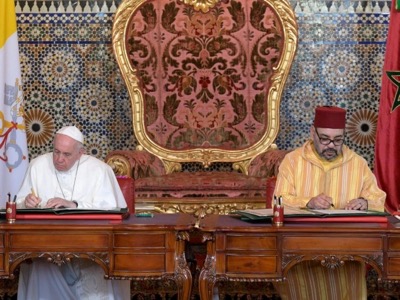 On the occasion of the visit of His Holiness Pope Francis to the Kingdom of Morocco, His Holiness and His Majesty King Mohammed VI, recognizing the unique and sacred character of Jerusalem / Al-Quds Acharif, and deeply concerned for its spiritual significance and its special vocation as a city of peace, join in making the following appeal:

“We consider it important to preserve the Holy City of Jerusalem / Al-Quds Acharif as the common patrimony of humanity and especially the followers of the three monotheistic religions, as a place of encounter and as a symbol of peaceful coexistence, where mutual respect and dialogue can be cultivated.

To this end, the specific multi-religious character, the spiritual dimension and the particular cultural identity of Jerusalem / Al-Quds Acharif must be protected and promoted.

It is our hope, therefore, that in the Holy City, full freedom of access to the followers of the three monotheistic religions and their right to worship will be guaranteed, so that in Jerusalem / Al-Quds Acharif they may raise their prayers to God, the Creator of all, for a future of peace and fraternity on the earth”.

Human Fraternity for World Peace and Living Together

Letter by pope Françis to the People of God