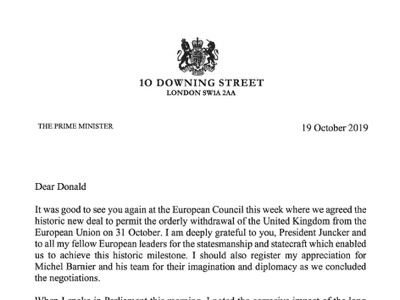 It was good to see you again at the European Council this week where we agreed the historic new deal to permit the orderly withdrawal of the United Kingdom from the European Union on 31 October. I am deeply grateful to you, President Juncker and to all my fellow European leaders for the statesmanship and statecraft which enabled us to achieve this historic milestone. I should also register my appreciation for Michel Barnier and his team for their imagination and diplomacy as we concluded the negotiations.

When I spoke in Parliament this morning, I noted the corrosive impact of the long delay in delivering the mandate of the British people from the 20 16 referendum. I made clear that, while I believe passionately that both the UK and the EU will benefit from our decision to withdraw and develop a new relationship, that relationship will be founded on our deep respect and affection for our shared culture, civilisation, values and interests. We will remain the EU’ s closest partner and friend. The deal we approved at last week’s European Council is a good deal for the whole of the UK and the whole of the EU.

Regrettably, Parliament missed the opportunity to inject momentum into the ratification process for the new Withdrawal Agreement. The UK Permanent Representative will therefore submit the request mandated by the EU (Withdrawal) (No.2) Act 20 19later today. It is, of course, for the European Council to decide when to consider this request and whether to grant it. In view of the unique circumstances, while I regret causing my fellow leaders to devote more of their time and energy to a question I had hoped we had resolved last week, I recognise that you may need to convene a European Council. If it would be helpful to you, I would of course be happy to attend the start of any A50 Council so that I could answer properly any question on the position of HM Government and progress in the ratification process at that time.

Meanwhile, although I would have preferred a different result today, the Government will press ahead with ratification and introduce the necessary legislation early next week. I remain confident that we will complete that process by 31 October. Indeed, many of those who voted against the Government today have indicated their support for the new deal and for ratifying it without delay. I know that I can count on your support and that of our fellow leaders to move the deal forward, and I very much hope therefore that on the EU side also, the process can be completed to allow the agreement to enter into force, as the European Council Conclusions mandated.

While it is open to the European Council to accede to the request mandated by Parliament or to offer an alternative extension period, I have made clear since becoming Prime Minister, and made clear to Parliament again today, my view, and the Government’s position, that a further extension would damage the interests of the UK and our EU partners, and the relationship between us. We must bring this process to a conclusion so that we can move to the next phase and build our new relationship on the foundations of our long history as neighbours and friends in this continent our people’s share. I am passionately committed to that endeavour.

I am copying this letter to Presidents Juncker and Sassoli, and to members of the European Council.