Popular Memory on the Offensive at Venezuelan Intellectual Conference

Intellectuals and artists participating in the ‘In Defense of Humanity’ conference separated into workshops today to begin debating ideas and strategies to unite third world efforts to combat neoliberalism. Last night Venezuelan President Hugo Chávez inaugurated the conference in a speech broadcast on all the major television channels. 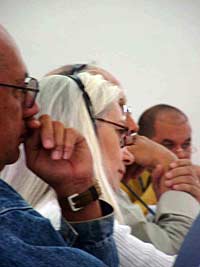 Mamoudum Bocoum, a Senegalese participant began the workshop on ‘Popular Memory’, speaking in one of 12 languages indigenous to the region now known as Senegal. After switching into English, the second Colonial language spoken after French, Bocoum underlined the centrality of language in any possible attempt at “re-appropriating history.”

British historian and long-time Latin America correspondent Richard Gott addressed a workshop on, drawing on his recent book “Cuba: a New History.” Conscious of the context of his talk, Gott drew a fundamental parallel between two ‘great teachers’ of Latin American independence: the Cuban José Martí and the Venezuelan Simon Rodríguez, noting the legacies of education in these countries, and of the anti-imperials discourse of both Martí and Rodríguez.

The ‘New History’ in Gott’s title does not refer only to an original academic work, but also to one that has a conscious and deliberate focus on testimonial. Members of the workshop drew on their experiences from Africa, the Middle East, Europe and Latin America, sharing stories of local histories versus hegemonic official histories.

Egyptian poet and community worker Zein El-Abdin Fouad Adbel Wahab shifted discussion from local and community histories, to international political events “filtered to transparency” by the mainstream media. “I’m not defending Osama Bin Laden or Saddam Hussein,” said El-Abdin, “but we must recognize the way these men, and these stories have been twisted, manipulated by the writers of contemporary history: the New York Times, the Washington Post, and others.”

Bolivian professor and social worker Rafael Puente addressed the complete absence of a sovereign history of either Bolivia or of Paraguay-both countries whose histories have been appropriated, according to Puente, by the imperialist power of the day. “Whether under the Spanish, British, or American,” argued Puente, “the history of Paraguay has never been separated from its economic and cultural exploitation.” According to Puente, Paraguay was the only country in Latin America to reject the imposition of free-trade by the British Empire in the 19th century. “This is a theme, a historical precedent that is clearly very relevant to Latin America in the 21st century and the struggle against a different empire’s attempts at imposing the same economic logic,” says Puente angrily. “And that’s exactly why it has been subverted, the history buried.”