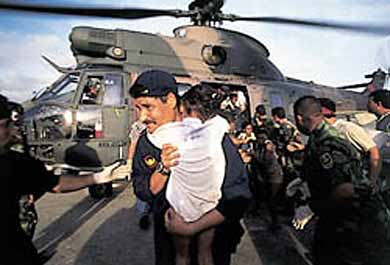 Venezuela has accepted responsibility for the disappearance of three people during a policing operation in the wake of heavy floods in 1999. The recognition was made by Venezuelan lawyer María Auxiliadora Monagas on behalf of the Venezuelan state during a hearing at the Inter-American Court of Human Rights (IACHR), a hemispheric body that is part of the Organization of American States (OAS).

On December 15th, 1999 as Venezuelans voted on the Bolivarian Constitution in a national referendum an unseasonal storm struck, initiating two weeks of heavy rains. The worst national disaster in modern Venezuelan history, the rains caused massive mudslides that buried an estimated 15,000 Venezuelans in the coastal state of Vargas. In the aftermath of the flooding, riots and looting broke out, leading to security operations by Venezuelan military and police.

According to the transcript of the court proceedings, “the measures adopted by a significant number of State agents in an effort to restore the necessary public order [in the aftermath of the floods] to safeguard people’s lives and security allegedly resulted in a number of human rights violations.”

The victim’s relatives were represented in court by the Center for Justice and International Law (Cejil), the Committee of Relatives of the Victims of the Events of February-March 1989 (Cofavic) and the Vicariate of Human Rights of Caracas.

Venezuela “committed to make integral reparations to the victims or their relatives, that they understand the guarantee of the right infringed, the necessity to repair and provide indemnity, the guarantee of non-repetition and the obligation of investigating the acts in question, and to sanction those responsible.”

The IACHR will make a ruling over the next few months specifying the reparations and indeminities. At least two of the victims were “disappeared” by the Bureau of Intelligence and Preventive Services (DISIP). The DISIP has long been a focus of concern to human rights groups in Venezuela, and it has recently come under further criticism and scrutiny by the Venezuelan government for the its use of excessive force and corruption.

Last month a Colombian drug trafficker escaped from DISIP headquarters in Caracas, known as the Helicoide, by allegedly bribing DISIP officers between US$1-3 million. And last week, DISIP officers were implicated in the shooting deaths of one student and the extrajudicial execution of two others during a student protest at the Universidad Santa María. Several other students were reportedly injured.

Minister of Justice and the Interior Jesse Chacón said on Friday of the students’ deaths that 24 officers of the DISIP are currently being investigated, along with 4 officers from Scientific, Penal and Criminalistic Investigation Corps (CICPC), and one officer of the Caracas Police.

In Thursday’s hearing the Venezuelan state resolved “in good faith” to compromise and settle. A communiqué issued by Venezuela’s Foreign Ministry noted that this is the first administration in Venezuelan history to admit to violations of human rights and grant reparations and indemnities to victims and their relatives.

Venezuela’s decision at the IACHR on Thursday to assume responsibility for crimes committed by state police and military during the 1999 Vargas disaster was the second such decision since Hugo Chávez was elected President in 1998. In 1999 Venezuela accepted responsibility for the killings and disappearances of at least 327 Venezuelan citizens during a week of riots and protests in February and March of 1989 known as the “Caracazo.”

Human rights groups and independent observers have argued that the real number was closer to 1,000. Venezuela’s admission of responsibility and commitment to facilitate a thorough investigation came after 10 years of stonewalling by previous administrations.

US-Venezuela Business Round Inaugurated in Caracas