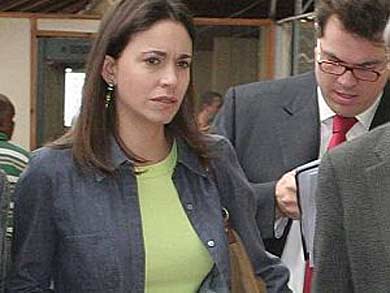 Four members of the Venezuelan non-governmental organization Súmate appeared in court Wednesday and again on Thursday, on charges of “conspiracy against the republican form of the nation.” Directors Maria Corina Machado and Alejandro Plaz are charged with being the masterminds of the conspiracy, while Luis Enrique Palacios and Ricardo Estévez are charged with being accomplices.

On Thursday, a judge ruled that the conspiracy charge would go to court, rejecting, however, the prosecution’s request that Machado and Plaz be imprisoned until the trial. No trial date has yet been set.

Immediately following judge Sandoval’s decision, spokespersons for the Spanish and United States governments issued official statements, and U.S.-based Human Rights Watch published a communiqué on its website, all expressing their concern that the trial is a form of political persecution against opposition group Súmate.

The conspiracy charge stems from a US$31,000 grant Súmate received from the U.S. government funded National Endowment for Democracy (NED), which state prosecutors allege they used for political activity.

Political parties are prohibited by Venezuelan law from accepting financial donations from abroad. According to co-director Maria Corina Machado, Súmate is an objective non-partisan civil association. Nevertheless, they have been widely criticized inside and outside Venezuela for taking a clear oppositional position to the government of Hugo Chávez, something Súmate legally denies, but practically admits.

In a recent article for the Christian Science Monitor, Mike Ceasar notes that “Machado does not hide her disdain for the populist president, who she says has profoundly damaged Venezuela’s democratic institutions.” Yet Machado-and her NED defenders-claims her group is not partisan, merely trying to build and expand democratic institutions in the face of the Venezuelan government’s authoritarian onslaught.

The political activity Súmate is accused of using NED for is the recall effort against Chávez, which culminated last August 15th with a nationwide referendum on the President’s mandate. Chávez won with nearly 60% of the vote, leading Súmate to cry foul-along with the official opposition.

The consistency with which Súmate’s views and those of the opposition coincide has provided ample fuel to allegations that they are in fact a political organization.

In an interview with Venezuelan daily El Universal in February 2004, President Chávez’s chief legal counsel Marisol Plaza Irigoyen argued that Súmate is, in fact, a “political party, disguised as a civil society association.”

The legal implications, if the charge could be proved, would mean Súmate is in violation of Venezuela’s Political Parties Law. Article 25 states clearly that political parties cannot receive funds of any sort from foreign states or organizations. Should Luisa Ortega Díaz, the public prosecutor in the case, prove that Súmate has in fact been acting as a political party, it would then be in violation of article 25.

According to Plaza, the sentence for such a violation is 2 to 3 years imprisonment.

There are much graver implications for the accused, however, since the Attorney General Office’s charge of “conspiracy” refers to Venezuela’s Penal Code. Article 132 refers to “conspiracy to destroy the republican political form of the nation,” which could carry a sentence of up to 26 years.

The charge of treason has been put to good use by defenders of both Súmate and the NED, in Venezuela and internationally. In November 2004, a prestigious group of academics, policymakers, and civil society representatives affiliated to the NED (either as board-members or grant recipients) penned a letter to President Chávez, then-President of the National Assembly Francisco Ameliach, and President of the Supreme Court Iván Rincón in defense of Súmate.

According to the report, the ABA selects certain international cases to observe every year that have international human rights implications. Cases in Egypt and Namibia have apparently also been selected. The European Union will also be monitoring the court proceedings against Súmate, said the same article. EU ambassadors in Venezuela agreed to send law specialists to monitor the case once it goes to trial at an as yet undecided future date.

Spain went one step further, making a public statement via Secretary of State Bernardino León, yesterday. The Spanish government “respects and values the work of opposition group Súmate and hopes the outcome of the case against its leaders does not undermine the strengthening of democracy” in Venezuela, León told reporters. The United States Department of State issued a statement earlier today, expressing their disappointment with judge Sandoval’s decision that the case merits a trial.

Last May, Machado had a private meeting with US President George W. Bush at the White House. She was the first Venezuelan political figure to do so during Bush’s tenure-including Venezuelan President Chávez. “The Venezuelan government’s charges against [the four defendants] are without merit,” said spokesperson Tom Casey. “We remain seriously concerned about political persecution and continued threats to democratic rights and institutions in Venezuela,” he added, continuing, “We urge the government of Venezuela to honor its commitments under the Inter-American Democratic Charter to guarantee the civil and political rights of all its citizens.”Finally, US-based Human Rights Watch also issued a communiqué on its website, where Americas director José Miguel Vivanco states: “The court has given the government a green light to persecute its opponents.” “Prosecuting people for treason when they engage in legitimate electoral activities is utterly absurd,” said the statement.