A key witness in the Danilo Anderson murder trial, Giovani Jose Vasquez De Armas, has identified FBI and CIA agents as being involved in the preparations to assassinate the Venezuelan State Prosecutor. Speaking on behalf of Vasquez De Armas, the Attorney General’s office said that those planning the killing, "all discussed the plan with the help of the FBI and CIA." 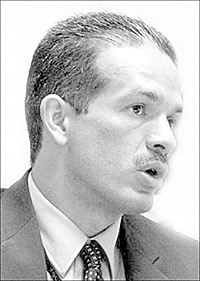 Danilo Anderson was a Venezuela Prosecutor killed by a car bomb in Caracas on November 18, 2004. He was murdered while investigating those who were involved in leading and organizing the April 2002 coup that briefly overthrew President Chavez and abolished the constitution and the National Assembly. Vasquez De Armas, a member of Colombia’s right wing paramilitary group called the United Self-Defense Forces of Colombia (AUC) has said that he was in charge of logistics for the plot to kill Danilo Anderson.

According to the Attorney General, Vasquez De Armas said that during a meeting in Darien, Panama, on September 4 and 6, 2003, an FBI Officer called "Pesquera" and a CIA agent called "Morrinson," attended a meeting along with two of the plot’s alleged organizers, Patricia Poleo and Salvador Romani, as well as two of those who actually did the killing, Rolando and Otoniel Guevera.

An official from the Attorney General’s office, speaking on behalf of Vasquez De Armas, said that in Panama the FBI and the plotting Venezuelans agreed, "to take out Chavez and the Government." He said, "the meeting’s final objective was to kill President Chavez and the Attorney General." Vasquez De Armas said it was at the next meeting in the town of Maracaibo, Venezuela on March 3 and 4, 2004, that a "dramatic change" of target took place.

At this meeting, attended, amongst others, by Retired General Eugenio Añez Núñez, "They decided definitely to change the objective and chose Danilo Anderson as the victim."

As yet the FBI or CIA have not responded to these further allegations of their involvement in plots to kill Venezuelan officials. The FBI’s most recent position has been to offer assistance with extraditing to Venezuela other Venezuelans suspected of participating in the plot.

Three Venezuelan’s from the same family, Rolando, Otoniel, and Juan Batista Guevera were arrested shortly after the murder for planting and detonating the bomb that killed Anderson. Those alleged of planning and ordering the assassination include a retired Venezuelan general, an anti-Cuban militant, and two leading opposition figures. Retired General Eugenio Añez Núñez and anti-Cuban activist Salvador Romaní were arrested over the weekend. Nelson Mezerhane, a businessman involved in the oppositional TV station Globovisión, and Patricia Poleo, a leading opposition journalist have not been captured by the police and are currently in hiding.

According to Vasquez De Armas, he was sent by the United Self-Defense Forces of Colombia to help provide operational support for the bombing after the plotters came to the organization for help. The Public Ministry said he and his family are currently under the witness protection program as they fear for the lives. This is why the Ministry says he cannot appear openly to discuss his testimony.

The defense lawyers for General Añez and Mr. Romani have claimed that the testimony of one Colombian paramilitary is not enough to prosecute their clients. The Judge in charge of the case, Alejandra Rivas Aliendres, said that Vasquez De Armas’s testimony was not the only one and that the charges were based upon, "12 separate pieces of evidence."