In view of Albania’s and Croatia’s recent admission to NATO and on the occasion of the Alliance’s 60th anniversary celebrations in France and Germany on April 3 and 4, Voltaire Net has asked Professor Daniele Ganser to give his assessment of this organisation. According to this world-renowned NATO specialist, the Alliance stopped playing a defensive role after the demise of the USSR. Today it has become the centurion of the United States in Europe. 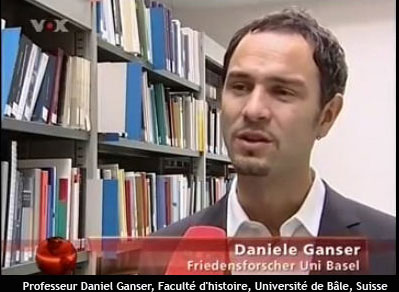 A Swiss historian, specialised in contemporary history and international relations since 1945, Daniele Ganser teaches at the University of Basel. He has written a landmark book on the role played by the network of stay-behind armies, « NATO’s Secret Armies », which has been translated into several languages. His current research focuses on the so-called « war on terror » and peak oil. He has frequently been invited by the Swiss Parliament and Swiss television to share his expertise on matters of foreign policy and security.

Question: Professor Ganser, after more than 40 years of absence, France has fully reintegrated into NATO’s military command. General Charles de Gaulle had made the decision to withdraw his country from the organisation after World War 2 and at the start of the Cold War. The General had not protested so much against NATO itself, as against its domination by the United States. In other words, he refused to place French military forces under the orders of an American general. How do you explain France’s return to NATO, considering that it continues to be an instrument of US military domination ?

Professor Ganser: To me this is a sign that France, or at least President Sarkozy and the majority of the French parliament, have accepted the dominance of the United States in world affairs and in NATO in particular. I don’t know about the French population, whether they like this US dominance and are ready to accept such a subordinate position, but I know that the Swiss would not accept such a position. It all reminds me very much of that Asterix and Obelix story. Speaking in that metaphor, Sarkozy has now given up that little village and put it under Roman Command. The US very much tries to imitate Roman and Greek Power, look at the buildings in Washington, the White House or the Capitol. And the US wants Europeans to accept a subordinate role, not as equals. French and German and Dutch soldiers in Afghanistan therefore have to fight under US Command. It has always been the case that NATO was dominated by the US, also during the time when the French were not part of the military command. If you look at NATO’s history, you see clearly that the Supreme Allied Commander Europe, the SACEUR, who is the highest ranking NATO officer in Europe, has always been an American General. NATO is run and commanded by the Pentagon. If a country does not want to accept that it must leave NATO, it’s as simple as that.

Question: Not so long ago, UN Secretary-General, Mr. Ban Ki-moon, signed a protocol agreement with NATO authorising it to intervene just about everywhere in the world under the pretext of peace-keeping operations. In your opinion, for what reason does NATO wish to become the policeman of the world ?

Professor Ganser: During the Cold War NATO served the purpose to protect Western Europe in case of a Soviet invasion. Most people could understand this strategy; it made a lot of sense. The invasion did not come, and thus NATO never had to fight the Soviet Union, luckily. After the collapse of the USSR in 1991 NATO was left without a clear cut mission. Many said it should be closed down, and indeed I agree that this would have been the best thing to do. But instead, NATO was enlarged; Poland, Rumania and many other countries became members. Despite the fact that NATO had promised to Gorbachev and Yeltsin that it would never take on former Warsaw pact countries as new members.

So NATO broke its word, and the Russians feel encircled by NATO, this does not help to promote peace and understanding in Europe, because Europe is dependent on Russian oil and gas, and to provoke the Russian bear by enlarging NATO has been a very dangerous game to say the least, a game which helped the US, but damaged EU Russian relations. Furthermore NATO bombed Kosovo in 1999, with no mandate of the UN Security Council, so this was an illegal war of aggression. And after 9/11 NATO activated clause 5, saying that not only the US but all NATO countries were at war, and attacked Afghanistan in October 2001.

So you see, NATO has gone through a very radical transformation after the end of the Cold War. But regardless of what Ban Ki-Moon said, people wonder what the job of NATO is today? More and more people realise that NATO has become a tool in the global struggle for energy. In Afghanistan contacts have been signed to build a pipeline from the Caspian through Turkmenistan and Afghanistan to Pakistan to the Indian Ocean. So really I think the Afghan war is a pipeline war. The Taliban were flown to the US in the 1990s to debate about the pipeline with Unocal, but they could not reach a deal. Then came 9/11 and everybody said it’s the most important thing to capture Osama Bin Laden. Today it does not seem to be so important anymore. But energy security, pipelines and the control of transport routes in the Gulf of Aden are key issues.

Question: In your book « NATO’s Secret Armies » you make a strong case to the effect that, in the past, NATO had been involved in State terrorism, by way of an underground struggle and other covert actions targeting specific ideologies or countries for geopolitical reasons. Do you think that NATO is pursuing the same strategy and/or continues to engage in similar type of actions.

Professor Ganser: During the cold war NATO was running secret armies, so called stay-behind armies, in all countries in Western Europe. That’s the so called Gladio affair. NATO never wanted to comment on this secret strategy. We now know that the CIA and MI6 helped NATO to set up the secret armies, and that some of these secret armies linked up with right wing extremists, former Nazis and Neo fascists, who carried out terrorist attacks in European countries. So this is a highly sensitive affair. The parliament of the EU wrote a letter to NATO and protested in late 1990, when the Gladio affair became known and asked for a detailed investigation. But NATO refused to comment. So you see, NATO is not a transparent structure, not in the Cold War and not today. So of course it is possible that secret operations continue, without that the public is informed.

Question: In conclusion, does NATO represent an instrument of sovereignty or of domination for Europe ?

NATO is clearly an instrument to dominate Europe, because the US is in charge. If you look at all attempts of the last 15 years of the EU countries to establish a EU defence policy which is independent of NATO and the US, you will see that Washington protested each time with a vengeance, an independent EU Defence Structue is not something which the Pentagon wants.