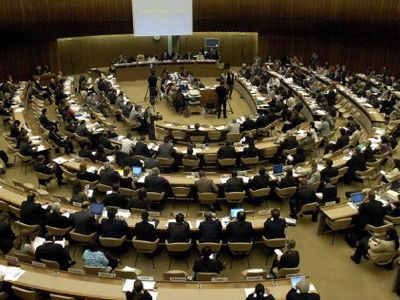 The Grave Attacks by Israeli Forces against the Humanitarian Boat Convoy

Guided by the purposes and the principles of the United Nations Charter, as well as by the provisions of the Universal Declaration for Human Rights,

Taking into consideration the provisions of the Fourth Geneva Convention for the Protection of Civilian Persons in Times of War of 12 August 1949,

Emphasizing the importance of the safety and well-being of all civilians including humanitarian personnel,

Emphasizing the need to ensure sustained and regular flow of goods and people into occupied Gaza and welcoming the initiatives aimed at creating and opening humanitarian corridors and other mechanisms for the sustained delivery of humanitarian aid;

1. Condemns in the strongest terms the outrageous attack by the Israeli forces against the humanitarian flotilla of ships which resulted in the killing and injuring of many innocent civilians from different countries;

2. Deeply deplores the loss of life of innocent civilians and expresses its deepest sympathy and condolences to the victims and their families;

3. Calls upon the occupying Power Israel to fully cooperate with the International Committee of the Red Cross (ICRC) to seek and provide information on the whereabouts status and condition of the detained and injured persons;

4. Demands the occupying Power Israel to immediately release all detained men and material and facilitate their safe return to their homelands;

5. Calls upon the occupying Power Israel to immediately lift the siege on occupied Gaza and other occupied Territories;

6. Calls upon the occupying Power Israel to ensure the unimpeded provision of humanitarian assistance, including of food, fuel and medical treatment to the occupied Gaza strip;

7. Welcomes the statements of the Secretary-General and the United Nations High Commissioner for Human Rights condemning the Israeli attacks and calls for the full accountability and credible independent inquiries into these attacks.

9. Decides to authorize the President of the Council to appoint members of this independent international fact finding mission, who should report to the Council on their findings in its fifteenth session.

10. Decides to remain seized of this matter.