Libyan Islamists go to Syria to "help" the revolution

Spanish pro-monarchy daily newspaper ABC published, in its edition of 17 December 2011, the testimony of its special envoy to Syria, the celebrated photojournalist Daniel Iriarte. Inside the Free Syrian Army, the journalist encountered senior Al Qaeda officials from Libya. 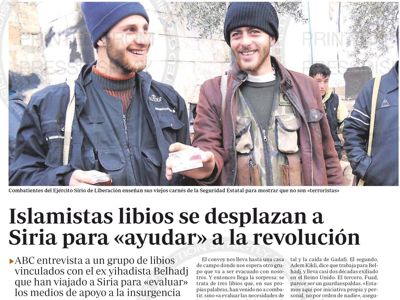 ABC interviewed a group of Libyans linked to former jihadist Belhadj who traveled to Syria to "assess" the ways of supporting the Syrian rebels.

The rebel named Brahim is concerned. "There is an army checkpoint at the entrance of the road," says the farmer, which means that the escape routes out of Djebel Zawi are cut. We feared something like this, so the very few foreign reporters have decided to leave Syria because of the risk of entrapment. But it seems that we’re late. Finally, after dark, Brahim found a solution. He seized three cars, which in the dark tried to find an alternative route. After hours of waiting, we were able to cross enemy lines through another point. Brahim laughs, pleased that "the Syrian Army has found a way out!", he says.

The convoy took us to a cottage where we join another group to be evacuated with us. And then comes the surprise : we discovered three Libyans who, in their own words, had come not to fight, but "to assess the needs of the Syrian revolutionary brothers." The Libyans did not try to hide their identities. These men are close to Abdel Hakim Belhadj, current military governor of Tripoli and former jihadist with links to Al Qaeda in the past.

One of them turns out to be someone well known to the reporters who covered the war in Libya: Mehdi al-Hatari, the former commander of the Tripoli Brigade, who played a key role in taking over the capital and the fall of Gaddafi. The second, Adem Kikli, says he works for Belhadj, and for almost two decades lived in the UK. The third, Fuad, seems to be a bodyguard. "We are here on our own individual initiative, not to follow somebody else’s orders," said Adem. He emphasizes that Harati publicly resigned from his post in Tripoli on 11 October. Adem, also says he has been with other Libyans, "a few tens", who have moved to Syria on their own to help the insurgents.

Harati, no doubt, is a man of action. He rose to the fore after participating in the Gaza Flotilla in the Spring of 2010. "I was wounded in the assault on the Mavi Marmara, and spent nine days in jail in Tel Aviv," he says. In February, Harati, who lived in Dublin and has an Irish passport, said goodbye to his wife and son, and along with other Libyans residing in Ireland went to Libya. There he created the Tripoli Brigade, an elite group of fighters, trained by advisers from Qatar, who fought fiercely in the final battle for the capital.

ABC found out, in addition, about his recent visit to places like Bahrain, Sudan and Ankara, for unexplained purposes. Recently, Harati was involved in a bizarre episode, when, in his own words, a gang of robbers raided his home, taking plenty of jewelry and 200,000 pounds (238,000 euros). Harati told police that a lot of money had been handed to him by a CIA agent to finance the fight of his group against Gaddafi. The fighter left those 200,000 pounds to his wife, in case anything happened to him and took the rest of Libya.

As we flee towards the border, the Libyans provide us with some clues as to their presence in Syria. "If it were up to us, we would send weapons to the Syrians tomorrow. We no longer need them!," Harati said. "They would would have to enter Syria from Turkey, but the Turks can not authorize it since there is no consensus within NATO", he adds. Once at the border, the three Libyans tell us they are returning to their homeland. At least, so they say.

Translated from Spanish by http://libyasos.blogspot.com/