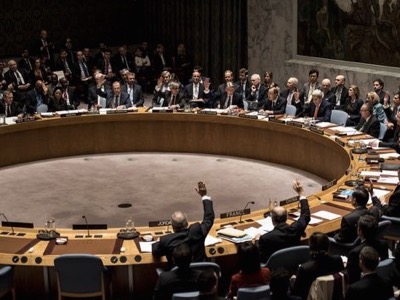 Expressing its gravest concern at the continued suffering of the Syrian people, the dire and deteriorating humanitarian situation, the ongoing conflict and its persistent and brutal violence, the negative impact of terrorism and violent extremist ideology in support of terrorism, the destabilizing effect of the crisis on the region and beyond, including the resulting increase in terrorists drawn to the fighting in Syria, the physical destruction in the country, and increasing sectarianism, and underscoring that the situation will continue to deteriorate in the absence of a political solution,

Recalling its demand that all parties take all appropriate steps to protect civilians, including members of ethnic, religious and confessional communities, and stresses that, in this regard, the primary responsibility to protect its population lies with the Syrian authorities,

Reiterating that the only sustainable solution to the current crisis in Syria is through an inclusive and Syrian-led political process that meets the legitimate aspirations of the Syrian people, with a view to full implementation of the Geneva Communiqué of 30 June 2012 as endorsed by resolution 2118 (2013), including through the establishment of an inclusive transitional governing body with full executive powers, which shall be formed on the basis of mutual consent while ensuring continuity of governmental institutions,

Encouraging, in this regard, the diplomatic efforts of the International Syria Support Group (ISSG) to help bring an end to the conflict in Syria,

Commending the commitment of the ISSG, as set forth in the Joint Statement on the outcome of the multilateral talks on Syria in Vienna of 30 October 2015 and the Statement of the ISSG of 14 November 2015 (hereinafter the “Vienna Statements”), to ensure a Syrian-led and Syrian-owned political transition based on the Geneva Communiqué in its entirety, and emphasizing the urgency for all parties in Syria to work diligently and constructively towards this goal,

Urging all parties to the UN-facilitated political process to adhere to the principles identified by the ISSG, including commitments to Syria’s unity, independence, territorial integrity, and non-sectarian character, to ensuring continuity of governmental institutions, to protecting the rights of all Syrians, regardless of ethnicity or religious denomination, and to ensuring humanitarian access throughout the country,

Encouraging the meaningful participation of women in the UN-facilitated political process for Syria,

Bearing in mind the goal to bring together the broadest possible spectrum of the opposition, chosen by Syrians, who will decide their negotiation representatives and define their negotiation positions so as to enable the political process to begin, taking note of the meetings in Moscow and Cairo and other initiatives to this end, and noting in particular the usefulness of the meeting in Riyadh on 9-11 December 2015, whose outcomes contribute to the preparation of negotiations under UN auspices on a political settlement of the conflict, in accordance with the Geneva Communique and the “Vienna Statements”, and looking forward to the Secretary-General’s Special Envoy for Syria finalizing efforts to this end,

Reconfirms its endorsement of the Geneva Communiqué of 30 June 2012, endorses the “Vienna Statements” in pursuit of the full implementation of the Geneva Communiqué, as the basis for a Syrian-led and Syrian-owned political transition in order to end the conflict in Syria, and stresses that the Syrian people will decide the future of Syria;

Requests the Secretary-General, through his good offices and the efforts of his Special Envoy for Syria, to convene representatives of the Syrian government and the opposition to engage in formal negotiations on a political transition process on an urgent basis, with a target of early January 2016 for the initiation of talks, pursuant to the Geneva Communiqué, consistent with the 14 November 2015 ISSG Statement, with a view to a lasting political settlement of the crisis;

Acknowledges the role of the ISSG as the central platform to facilitate the United Nations’ efforts to achieve a lasting political settlement in Syria;

Expresses its support, in this regard, for a Syrian-led political process that is facilitated by the United Nations and, within a target of six months, establishes credible, inclusive and non-sectarian governance and sets a schedule and process for drafting a new constitution, and further expresses its support for free and fair elections, pursuant to the new constitution, to be held within 18 months and administered under supervision of the United Nations, to the satisfaction of the governance and to the highest international standards of transparency and accountability, with all Syrians, including members of the diaspora, eligible to participate, as set forth in the 14 November 2015 ISSG Statement;

Acknowledges the close linkage between a ceasefire and a parallel political process, pursuant to the 2012 Geneva Communiqué, and that both initiatives should move ahead expeditiously, and in this regard expresses its support for a nationwide ceasefire in Syria, which the ISSG has committed to support and assist in implementing, to come into effect as soon as the representatives of the Syrian government and the opposition have begun initial steps towards a political transition under UN auspices, on the basis of the Geneva Communiqué, as set forth in the 14 November 2015 ISSG Statement, and to do so on an urgent basis;

Requests the Secretary-General to lead the effort, through the office of his Special Envoy and in consultation with relevant parties, to determine the modalities and requirements of a ceasefire as well as continue planning for the support of ceasefire implementation, and urges Member States, in particular members of the ISSG, to support and accelerate all efforts to achieve a ceasefire, including through pressing all relevant parties to agree and adhere to such a ceasefire;

Emphasizes the need for a ceasefire monitoring, verification and reporting mechanism, requests the Secretary-General to report to the Security Council on options for such a mechanism that it can support, as soon as possible and no later than one month after the adoption of this resolution, and encourages Member States, including members of the Security Council, to provide assistance, including through expertise and in-kind contributions, to support such a mechanism;

Reiterates its call in resolution 2249 (2015) for Member States to prevent and suppress terrorist acts committed specifically by Islamic State in Iraq and the Levant (ISIL, also known as Da’esh), Al-Nusra Front (ANF), and all other individuals, groups, undertakings, and entities associated with Al Qaeda or ISIL, and other terrorist groups, as designated by the Security Council, and as may further be agreed by the ISSG and determined by the Security Council, pursuant to the Statement of the ISSG of 14 November 2015, and to eradicate the safe haven they have established over significant parts of Syria, and notes that the aforementioned ceasefire will not apply to offensive or defensive actions against these individuals, groups, undertakings and entities, as set forth in the 14 November 2015 ISSG Statement;

Welcomes the effort of the government of Jordan to help develop a common understanding within the ISSG of individuals and groups for possible determination as terrorists and will consider expeditiously the recommendation of the ISSG for the purpose of determining terrorist groups;

Emphasizes the need for all parties in Syria to take confidence building measures to contribute to the viability of a political process and a lasting ceasefire, and calls on all states to use their influence with the government of Syria and the Syrian opposition to advance the peace process, confidence building measures and steps towards a ceasefire;

Requests the Secretary-General to report to the Council, as soon as possible and no later than one month after the adoption of this resolution, on options for further confidence building measures;

Calls on the parties to immediately allow humanitarian agencies rapid, safe and unhindered access throughout Syria by most direct routes, allow immediate, humanitarian assistance to reach all people in need, in particular in all besieged and hard-to-reach areas, release any arbitrarily detained persons, particularly women and children, calls on ISSG states to use their influence immediately to these ends, and demands the full implementation of resolutions 2139 (2014), 2165 (2014), 2191 (2014) and any other applicable resolutions;

Underscores the critical need to build conditions for the safe and voluntary return of refugees and internally displaced persons to their home areas and the re-habilitation of affected areas, in accordance with international law, including applicable provisions of the Convention and Protocol Relating to the Status of Refugees, and taking into account the interests of those countries hosting refugees, and urges Member States to provide assistance in this regard, and looks forward to the London Conference on Syria in February 2016, hosted by the United Kingdom, Germany, Kuwait, Norway and the United Nations, as an important contribution to this endeavor, and further expresses its support to the post-conflict reconstruction and rehabilitation of Syria;

Requests that the Secretary-General report back to the Security Council on the implementation of this resolution, including on progress of the UN-facilitated political process, within 60 days;

Decides to remain actively seized of the matter.