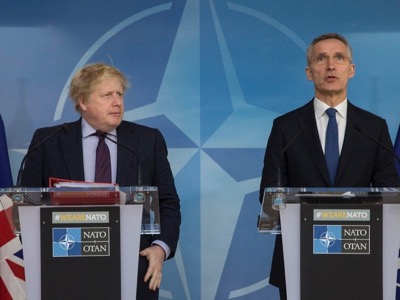 Welcome to the NATO Headquarters and it’s really a pleasure to meet you today, here, and thank you also for updating me on the latest developments in the Salisbury investigation.

The attack in Salisbury was the first use of a nerve agent on Alliance territory.

And the attack was an unacceptable breach of international norms and rules.

NATO Allies have been united in condemning this attack. And they have offered their support to the ongoing investigation.

Russia’s response so far has demonstrated a clear disregard for international peace and security.

We continue to call on Russia to provide complete disclosure of the Novichok programme to the Organisation for the Prohibition of Chemical Weapons.

And we welcome the UK’s cooperation with the OPCW in the investigation of this horrendous attack.

The attack in Salisbury comes at the background of a pattern of reckless behaviour of Russia.

And NATO is responding to this pattern of behaviour.

We have seen the illegal annexation of Crimea, violating the sovereignty and territorial integrity of Ukraine.

We have seen different types of hybrid tactics including cyber attacks.

NATO’s approach to Russia is firm, defensive and proportionate. It combines strong deterrence and defence with openness to a meaningful dialogue.

So Foreign Secretary, thank you once again for coming here. Russia will continue to seek to divide us. But NATO Allies stand united. And we stand in solidarity with the UK.

Boris Johnson [Secretary of State for Foreign and Commonwealth Affairs of the United Kingdom]: Well, thank you very much, Jens, and thank you for welcoming us today to… to NATO. We met to discuss, as you’ve just said, the attack against Sergei and Yulia Skripal using a military grade nerve agent. And you and I, Secretary General, are clear that the use of such an agent is a violation of the Chemical Weapons Convention and a flagrant breach of international law, and I’d like to extend my gratitude to you, Jens, for your… for the personal statement you made so soon after the attack.

We share the view that the poisoning of Sergei Skripal is not an isolated case, but the latest in a pattern of reckless behaviour by the Russian State. That behaviour goes back many years. From Russia’s annexation of Crimea to cyberattacks and its involvement in the Syrian war, Russia has shown itself, the Russian State has shown itself to have a blatant disregard for international order, for international law and values, our values. Those values sit at the heart of NATO and everything that we do, which is why our NATO Allies have shown such strong and undivided support.

The North Atlantic Council’s statement issued last week is a clear powerful statement of political support and demonstrates NATO’s unity, capability and determination to respond to the challenges that we face together. We stand united in the face of adversity, be it in response to the attack in Salisbury or a threat to any NATO Ally, which is the founding principle of this organisation. Thank you.

Question [BBC]: Secretary General, Natalie Higgins, BBC. What practical concrete steps is NATO willing to take now to put further pressure on Russia in the wake of the Salisbury attack? Actions over deeds. And Foreign Secretary, what action of this kind have you requested from your European and NATO Allies? And secondly, if I may, on Brexit, as one of our most eminent Brexiteers, isn’t the case that today’s agreement is once against an example of the UK side making concessions in order for this to move forward?

Jens Stoltenberg:: Well, we have expressed strong political support to the United Kingdom and that is important because it shows that all 29 NATO Allies stand united, we stand in solidarity with United Kingdom and the UK is not alone, we are responding as an Alliance. Second, NATO Allies offered immediately after the attack, support to the ongoing investigation, if so requested by the UK. UK has world-class expertise capabilities to deal with these kind of investigations themselves, but if there is a request NATO Allies are ready to provide support. And thirdly, and that’s perhaps the most important role of NATO, is that NATO is responding to this pattern of reckless behaviour by Russia, which we have seen over many years.

So, we are now in the process of implementing the biggest reinforcement of our collective defence since the end of the Cold War, with battlegroups deployed to the eastern part of the Alliance, with high readiness of our forces tripling the size of the NATO Response Force, but also now the fact that we see increased defence spending across Europe and Canada for the first time in many years. So, NATO is responding to a Russia which is responsible for aggressive actions in Crimea, which… which is responsible for reckless behaviour in many cases, and the attack in Salisbury takes place… so, on the background of… of this reckless behaviour we have seen over a long period of time, and NATO is responding to that.

Boris Johnson: Thanks, Jens. Well, I just want to say on the reaction of the world and all our friends and Allies, it really is very striking, the contrast between the powerful statements of support that the UK is getting today and over the last few days, with the… the much more muted reaction you saw 12 years ago after the death Alexander Litvinenko, and I think there’s a reason for that and it is that, across so many parts of the world, we are seeing… there are countries who, directly or indirectly, have experience now of disruptive or malign Russian behaviour. And that’s why what we’re doing now is working with our friends and partners on all sorts of measures, tackling cyber warfare, intelligence sharing to do that, working together… we discussed this in the… in the EU just now, working to tackle disinformation that comes from Russia, a lot of the fake news that’s pumped out. Tackling hybrid warfare, as Jens has just said, one of the key things that NATO now has to consider, and of course looking at how we go after the money that may or may not have been… well, very likely has been corruptly or illicitly obtained, and of course we in the UK now have powers to do that. Since the Criminal Finance Act of last year, there are compensate… there are ways of taking money away, unexplained wealth orders that we can put in place, and those can be done and are being done now, in concert with our friends and partners around the world, many of them in NATO. So, that is the work that is going on.

Now, on Brexit, all I can say is that… I can’t remember what your question was. It’s all going… the negotia… so, there’s a great step forward in the negotiation, how about that. Will that do as an answer? I think things are going extremely well.

Question [NRK]: The same question for both of you. Foreign Secretary, you today had a meeting with the EU, where they unconditionally expressed their solidarity. From your perspective, what would be the best way forward for the EU and the UK and NATO to do something together to increase the pressure on Russia?

Boris Johnson: Well, let… Thanks, I mean let… a chance for me to repeat, if I may, the last answer, which is, you know, there are things we can and must do together, tackling disinformation from Russia, and the UK has been helping to fund that at an EU level. Tackling cyber together, sharing intelligence about what Russia is up to in cyber warfare, which has had an impact on many countries around the European Union and in NATO, and going after the money that has been illicitly or corruptly obtained, and that is the way, one of the most important ways forward, unexplained wealth orders. We have a National Crime Agency and National Economic Crime Unit that are looking at this kind of stuff right now, but you can only do it in concert with partners around the world. And it’s very, very heartening and encouraging to find the level of support, not just here in NATO, but in Washington and capitals around the world. Thank you very much everybody.

Jens Stoltenberg: Let me just echo what Boris just said, as I totally agree with him, we work together with the EU on hybrid, on cyber and on many other issues which are relevant to how we respond to Russia, also working with partners, for instance our eastern partners. So, this shows the importance of strong NATO-EU cooperation and we have been able to bring that cooperation to a new level, an unprecedented strong cooperation, and that’s part of our response to a more assertive Russia. Thank you so much, Boris.

Oana Lungescu: Thank you very much.

Jens Stoltenberg: Thank you, everybody.

Boris Johnson: Thank you so much.