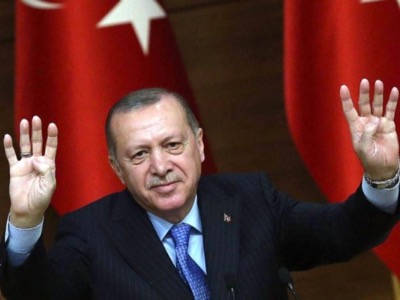 Turkey has gone to extraordinary lengths to alleviate suffering of the Syrian people, hosting some 3.5 million refugees—more than any other country in the world. At the same time we have become the target of terrorist organizations operating next door : the so-called Islamic State and the PKK. Neither the heavy cost of humanitarian efforts nor security concerns have weakened our resolve.

As Turkey faced those challenges, it made diplomatic efforts to find a political solution. We have brought the Syrian opposition to the negotiating table in Geneva and launched the Astana process alongside Russia and Iran. Consequently, Turkey was able to broker cease-fires, create de-escalation zones, and evacuate civilians from areas under regime attack.

Today we find ourselves at a critical juncture again, as the Assad regime, with the help of its allies, prepares to launch a massive offensive against Idlib, which is home to some three million people and one of the few remaining safe havens for internally displaced Syrians. In an attempt to prevent the assault, my government contributed to the creation of a deconfliction zone and set up 12 observation posts to document and report cease-fire violations.

The Assad regime seeks to legitimize its imminent attack on counterterrorism grounds. Make no mistake : No country appreciates the need to combat terrorism better than Turkey, which has suffered severely from terrorist attacks since the Syrian conflict began exporting insecurity throughout the region. But Bashar Assad’s solution is a false one. Innocent people must not be sacrificed in the name of fighting terrorism. This will only create new hotbeds of terrorism and extremism. The rise of ISIS was an outcome —not the cause— of what was happening in Syria. The international community must contain such violence to stop terrorism from taking root.

In Idlib, we face similar challenges. Certain designated terrorist organizations, including Hayat Tahrir al-Sham, remain active in this area. Yet those fighters account for a fraction of Idlib’s population. In order to eliminate terrorist and extremist elements in Idlib and to bring to justice foreign fighters, a more comprehensive international counterterrorism operation is necessary. Moderate rebels played a key role in Turkey’s fight against terrorists in Northern Syria ; their assistance and guidance will be crucial in Idlib as well.

Preventing the assault on Idlib need not set back counterterrorism efforts. Turkey has succeeded in fighting terrorist groups, including ISIS and the PKK, without harming or displacing civilians. In order to restore some level of stability to affected areas, dozens of Turkish servicemen and servicewomen have lost their lives. Turkey’s ability to maintain order in Northern Syria is proof that a responsible approach to counterterrorism can win hearts and minds.

All members of the international community must understand their responsibilities as the assault on Idlib looms. The consequences of inaction are immense. We cannot leave the Syrian people to the mercy of Bashar Assad. The purpose of a regime offensive against Idlib would be indiscriminate attacks to wipe out its opposition —not a genuine or effective campaign against terrorism. A regime assault would also create serious humanitarian and security risks for Turkey, the rest of Europe and beyond.

It is crucial for the U.S., which has concentrated on chemical attacks, to reject its arbitrary hierarchy of death. Conventional weapons are responsible for far more deaths. But the obligation to stop the next bloodshed is not the West’s alone. Our partners in the Astana process, Russia and Iran, are likewise responsible for stopping this humanitarian disaster.

Idlib is the last exit before the toll. If the international community, including Europe and the U.S., fail to take action now, not only innocent Syrians but the entire world stands to pay the price. Turkey has done everything in its power to stop the bloodshed next door. To ensure that we succeed, the rest of the world must set aside narrow self-interest and throw its weight behind a political solution.