A President Serving the CIA

In the hope of obtaining some help in extremis, a hireling in a bind writes to his boss recalling how for years he had served him faithfully. The “hireling” is Ricardo Martinelli, President of Panama from 2009 - 2012. From June 2017 he has been detained in the United States at the request of the current government of Panama which is charging him of, inter alia, spying and tapping the telephones of more than 150 people when he was President. Martinelli’s letter has just created a sensation in the Panama media because it is addressed … to the US government. From Panama, the analyst Julio Yao, addresses the issue. 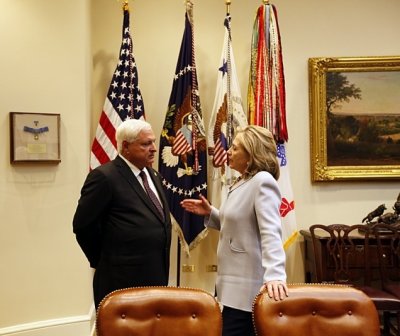 On a visit to the White House, on 28 April 2011: President of Panama, Martinelli, in a side meeting with the US Secretary of State Hillary Clinton.

A people always hope that their president serves them and that he represents them with dignity even when placed in extremis. It would appear that the former president of Panama, Ricardo Martinelli, has forgotten this primary constitutional mandate: Dignity! Dignity! Forever dignity!

Tired of waiting for help from the United States to save him from extradition to his country, Panama, to face a number of different charges, former President Martinelli calculated that a tearful letter addressed to his people and the US government, setting out how loyal he had been to Washington, would earn him the sympathy necessary to liberate him from his ordeal after one year in prison [1].

With humiliating exhibitionism, Martinelli confesses that he has always been a loyal servant to Washington, specifically to the CIA (Central Intelligence Agency). He confesses that he:
• detained the North Korean boat Chong Chon Gang “on the instructions of the CIA”;
• voted 100% in support of Israel, which is why he was declared a persona non grata by Arab organizations such as Hezbollah;
• helped the head of the CIA station in Italy escape from Interpol. The former had been sentenced for kidnapping and torture alleged “terrorists;
• allied himself with the United States in the US war against FARC (Fuerzas Armadas Revolucionarias de Colombia “Revolutionary Armed Forces of Colombia”);
• authorized connecting 19 radars (from the aeronaval bases) to the US South Command;
• installed cameras to obtain national and international information; and
• had lunch together with the Minister of Security, José Raúl Mulino, at the CIA headquarters in Langley where they guaranteed protection against Varela [the current President of Panama].

Following this shameful striptease, the former President Martinelli confesses: “when the CIA asked me to detain a North American ship coming from Cuba, I did not blink.”

True, he did not blink, however, he is a tattletale. And his tales are rubbish and lies. The shameful culprit blabs to the CIA that “his enemy”, today’s President of Panama, Juan Carlos Varela, maintains a “close relationship” with the Cuban President Raul Castro, who threatened him, an incident that Martinelli reported to the then US President Barack Obama.

It appears that Martinelli has not kept in mind two things: first, that the wife of Caesar must not only be but must also appear to be; and second, that the empire has no friends only interests. The culprit, now making entreaties, carelessly forgets to recognize that his “enemy”, today’s President, Varela, was at the time his Vice President and the Minister of Foreign Affairs and therefore his boy. This would automatically bring Varela under the protection of the CIA umbrella.

Anecdotes apart, let us consider the relevant part of his confessions.

Martinelli is putting the United States into a very serious problem; his confession on the “services”, that from the presidency of Panama, he provided to the CIA and not to the nation that elected him nor to International Law (Article 4 of the Panama Constitution) means that navigation through the Panama Canal is not governed by the Treaty of Neutrality which guarantees open transit, free of discrimination and free from foreign troops – but by a navigation policy dictated by the CIA, a policy based on a 1880 Monroist Canal Declaration that can be traced back to President Rutherford Hayes, of 1880 [2].

Martinelli is revealing to us that the US Government ordered him to detain - at High Sea mark you! - the North Korean ship Chong Chon Gang and he handed it over to Panama in violation (on the part of both Panama and the United States) of the UN Convention on the Law of the Sea, an additional crime and one, no less serious than that violation of the neutrality of the Canal [3].

By always voting in support of Israel and the UN and declaring Israel to be that the “Guardian of Jerusalem” (Author’s note: this is my take), Martinelli is offending the Palestine people and the Arab world. He is also violating international law. This, coupled with the duty to hand over to the Italian judiciary a member of the CIA on the run [wanted for kidnapping and torture], is a crass violation of human rights in both countries.

Setting up aeronaval bases and radars and aligning Panama against FARC, constitutes a shameless violation of the Treaty of Neutrality and a radical distancing from neutrality and traditional pacificism of the people of Panama, as well as the policy of non-alignment, adopted by the Republic of Panama in 1975.

The confession of former President Martinelli makes him responsible for the attack on Panama’s claim to statehood. For he submitted it to powers located outside the region and supported foreign intervention into its internal affairs. He also violated the UN Charter and the OAS, the Treaty of Neutrality and the human rights of two sets of people: the people of Palestine and Italy. In sum, he betrayed his fatherland, Panama.

US to clean up chemical weapons illegally left behind in Panama