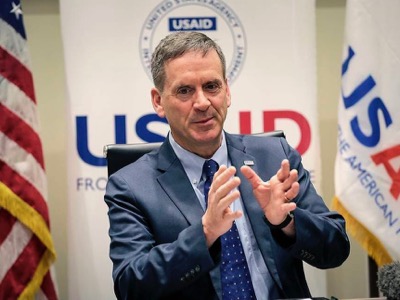 United States Agency for International Development Administrator Mark Green’s speech in Washington, D.C. sounded as if coming from the past – from the Cold War era [1]. He presented the Countering Malign Kremlin Influence Development Framework designed by his agency, which is part of the US Department of State. The very name of the Framework testifies to the fact that the USAID is not working to establish an atmosphere of cooperation on the planet and that in fact it is a tool of ideological warfare and brainwashing. The document, which tries to terrify the rest of the world with the threat of Russia allegedly trying to undermine democracy everywhere, makes one question the authors’ sanity.

The term “countering” hides a clumsily disguised aggressive offensive approach. The Framework is openly aimed at promoting Russophobia in the world, especially in the countries neighbouring Russia. The desire to sow fear of our country and to frighten the world with the fake “Russian interference” belies the thinly veiled intent to bend them to US influence and breed anti-Russia sentiments including, among other things, in order to force Europe to buy expensive American LNG. In other words, Washington is not averse to gaining a commercial advantage while pursuing its geopolitical goals.

Such an official action plan narrated by a high-ranking official in the US Administration is certainly depressing. It is in stark contrast to the constructive modality of the recent meeting between Vladimir Putin and Donald Trump at the G20 summit in Osaka. Obviously, powerful Washington officials are doing their best to thwart the normalisation of Russia-US relations and to further damage them.

On our part, we have often reasserted our openness in building constructive cooperation with the United States on the basis of equality and consideration for each other’s interests. Meanwhile, the vicious anti-Russia propaganda from Washington eager for global domination nullifies these efforts. Too bad.

Source : “Russian comment on the statements made by Administrator of the United States Agency for International Development (USAID) ”, Voltaire Network, 6 July 2019, www.voltairenet.org/article207028.html

Source : “Russian comment on the statements made by Administrator of the United States Agency for International Development (USAID) ”, Voltaire Network, 6 July 2019, www.voltairenet.org/article207028.html