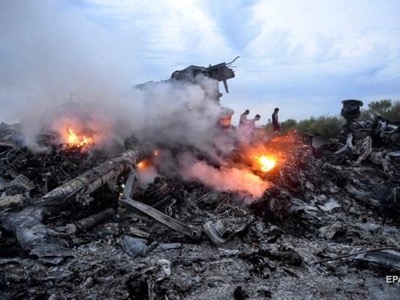 Five years ago, on July 17, 2014, Malaysia Airlines ‘Boeing’, a civilian aircraft operating flight МН17 from Amsterdam to Kuala-Lumpur, crashed in eastern Ukraine. All 298 people on board died.

Unfortunately, this tragedy became a tool in a dirty political game. Within only hours, if not minutes, after the crash, as if prompted by someone, media and then Western political leaders launched a salvo of accusations against Russia for the killing of innocent people. Two investigations were opened into the crash: a technical investigation to identify the causes of the Boeing’s crash, and a criminal inquiry to identify the individuals responsible for what had happened. In both cases, the provisional assumptions were made for the sole purpose of substantiating accusations of Russia’s involvement in the crash. The interpretation of all the facts obtained during these investigations was biased and designed to incriminate Russia, while facts that did not fit the original assumptions were quietly swept under the carpet or dismissed under far-fetched pretexts. Russia was also accused of refusing to fully cooperate with the investigation and obstructing it.

We all know that this is not true. In keeping with UN Security Council Resolution 2166, Russia has always sought to facilitate efforts to find out the truth and to hold the actual perpetrators accountable rather than those who were designated in advance as the initiators of what had happened. We remain committed to doing so in the future.

While Russia was not permitted to take part in the investigation, from the very first day it worked with the Netherlands, the Dutch Safety Board and the Joint Investigation Team (JIT), sharing all the information it had on the MH17 crash. We submitted the results of a full-scale experiment carried out by the Almaz-Antei Corporation, the original radio location data refuting the possibility of launching a missile from a specific area designated by the technical investigation into the reasons of the crash, and now shared by the JIT. At the request of the investigators, Russia declassified for the first time ever documents on the Buk surface-to-air missile complex, proved that the missile that downed the aircraft, according to the JIT, belonged to Ukraine, and many other things. Unfortunately, all these unique data are insistently ignored and not taken into consideration by the investigation or silenced during JIT’s news events that increasingly resemble political propaganda shows.

At the same time, evidence is based on sources that are quite questionable: social media, poor quality photo images and video footage, data from Ukrainian special services with nothing to back them, and investigations by would-be independent bloggers. It is no surprise that guided by an approach of this kind it took some time before the JIT allowed Malaysia to join the investigation. The latest statements made by this country’s officials and experts show that Malaysia is not inclined to make any hasty accusations. The prohibition to publish any data without the approval from all the participants in the group, including Ukraine, also raises eyebrows.

This can easily explain the absence of any alternative versions of the crash, as well as the fact that five years on after the crash tangible progress has yet to be achieved, despite the optimism displayed by the JIT at a recent news conference.

At the same time, there were no accusations against Ukraine for failing to close its airspace above an area affected by an armed conflict, despite the fact that lawsuits to this effect against Ukraine have already been referred to the ECHR.

Nevertheless and despite this biased attitude toward Russia, we remain open to cooperation. Russia strongly believes that the path to the truth lies through dialogue and cooperation.

We note that had the investigation been guided by the same approach and listened to our critique while fully taking into account our proposals, the quality of both the technical and criminal investigations could have been much higher.

Russia has first-hand experience in dealing with horrible tragedies of this kind, and knows all too well how to cope with immense loss. Russian nationals suffered in air crashes on multiple occasions. We remember very well the tragedy above the Black Sea in 2001, when a Sibir plane was downed by a surface-to-air missile launched by the Ukrainian military.

As deplorable as it is, in doing so the Dutch authorities are playing on the feelings as well as the sorrow of the relatives of MH17 victims. While calling for justice and for holding the perpetrators accountable, they use associations and unions formed by these people to spread the message of Russia’s involvement within the international public opinion and place the responsibility for paying the corresponding compensation on Russia.

We strongly believe that only by conducting the investigation in a truly politics-free and professional manner can we identify what caused the crash and obtain the truth once and for all.

Russia calls on the Joint Investigation Team (JIT) to focus on its main task which is to impartially analyse all the available data in order to identify the true causes of what happened there and find those who are behind this tragic event. However, considering how the investigation was and is conducted, we cannot regard it as impartial or unbiased. The quality of the so-called evidence that was demonstrated at JIT’s news conferences tends to prove the contrary, i.e. the determination to adjust facts that are actually far-fetched speculation and fakes in order to fit them into the original assumptions accusing Russia.