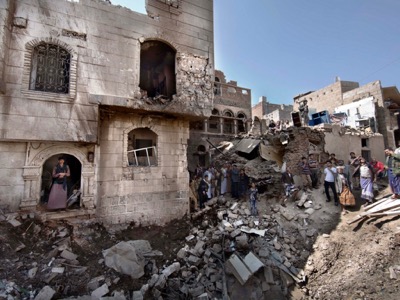 The Government of Yemen holds the Southern Transitional Council responsible for the armed escalation in the interim capital of Aden and for its serious consequences that threaten the security and safety of citizens and security and stability in general.

In its statement, the Government reiterated its rejection of the irresponsible actions of the Southern Transitional Council, which amounted to the use of heavy weapons and the attempt to storm State institutions and army camps. The Government regrets that those groups refused to spare the city of Aden and its peaceful inhabitants the dangers of slipping into chaos and fighting that will topple the civil peace and services that have been achieved during the few years following the liberation of Aden from the grip of the Iran-backed Houthi rebel militia.

It also stressed that, by assuming their national responsibilities, the Government, the army and security forces are committed to preserving State institutions and the safety of citizens. With the support of all wise and honourable people and the brothers in the coalition, they will work to address all attempts to harm institutions and individuals. The statement pointed out that the Government is working with the leadership of the coalition to form a committee to investigate the events in the city of Aden.

The Government renewed its invitation to the leadership of the coalition represented by Saudi Arabia and the United Arab Emirates to apply urgent and strong pressure on the Southern Transitional Council to stop any military movements in the city, and to oblige all security units and military formations to adhere to the instructions of the security and military establishment and not to rebel against the State and its institutions.

The Government also called on political parties, all political and social actors, all wise people of Yemen to assume their national responsibility to reject, resist and condemn the calls of rebellion, war and irresponsible adventures that, if not stopped, would lead the country into chaos and drag it into a dangerous slope.

The Government said that the country has not yet overcome the consequences of the Houthi militias coup and rebellion, which led the State institutions and services to collapse, disrupted the public sector salary payments, led the economy to collapse and worsened the already catastrophic humanitarian crisis. This requires all sensible people to be responsible, putting reason, wisdom and supreme national interest above everything else in order to spare the city of Aden and the liberated areas the consequences of any rebellion, civil strife, chaos or catastrophic repercussions on people and property, which will present a serious blow to the efforts of the coalition and its mission in Yemen, and is in the interest of no one but the Houthi coup militia and the Iranian project in the region.

Washington wants to put an end to the war in Yemen