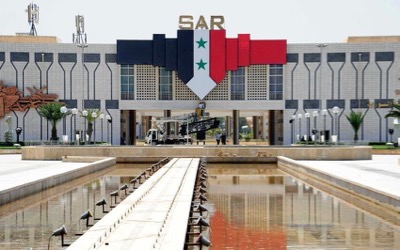 The 61st annual Damascus International Fair is scheduled to open in the Syrian capital on August 28. Its importance could hardly be overestimated for a country advancing towards stabilisation and a recovery of its economy devastated in an attack launched by international terrorism. Last year, the event was attended by officials and businesspeople from 49 countries. This year, the organisers are hoping to attract as broad a representation of foreign partners interested in cooperation with Syria.

It is clear that this prospect does not please those who have been active in supporting the forces hostile to the legitimate Syrian Government. After the failure of their years-long attempts to topple the “Assad regime” by military means, using armed thugs and terrorists as their strike force, they have fallen back on financial and economic methods to strangle the country. For this purpose, they are using illegitimate unilateral sanctions and opposing foreign aid intended to help rebuild the basic infrastructure. They also prevent Syrian refugees from returning to the government-controlled areas.

Moreover, the US administration has gone as far as issue direct threats to anyone willing to promote trade and economic interaction with Syria or even just to consider this prospect. 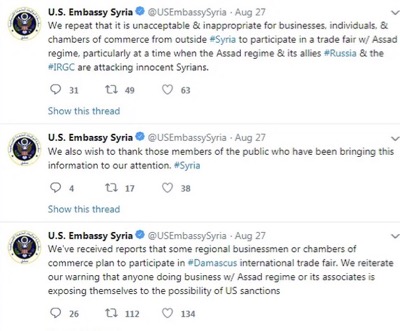 Starting on August 22, the website of the US Embassy in Syria (which is still operating although the Embassy itself ceased business back in 2011) has been posting warnings against visiting the Damascus Fair for fear of the US Treasury Department’s sanctions. It is stressed that Washington and its allies will continue to pressurise the “Assad regime” and “those who support it.” In this sense, the August 23 post merits a special focus as urging the Syrian public to inform the US authorities about companies and private individuals planning to attend the business forum in the Syrian capital.

Simultaneously, Western media regularly carry comments by experts affiliated with the White House, who are extolling the high promise and relevance of humanitarian and other projects in Syrian areas beyond the Euphrates River, where the US military are running the show. In parallel, Washington goes out of its way to convince other countries to channel massive development aid to US-controlled territories in northeastern Syria.

We regard the continuing undisguised US obstruction of the Syrian leaders’ efforts to rebuild the country and lead it out of the crisis as damaging to the unity, sovereignty and territorial integrity of the Syrian Arab Republic and standing in direct contradiction to the spirit and letter of the international community’s resolutions on Syria, including Resolution 2254 of the UN Security Council.