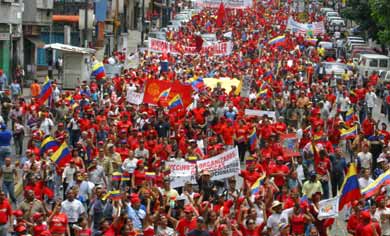 Supporters of Venezuelan President Hugo Chavez took the streets of Caracas on Sunday, as the country begins to prepare for a recall referendum on the mandate of the controversial South American leader. The Chavistas marched from tree sections of the country’s capital to converge at the downtown Bolivar Avenue where the President gave a speech vowing to defeat the opposition in the upcoming recall referendum.

Last week, Venezuela’s National Electoral Council determined that opponents of the President collected a little over the required number of signatures to demand a referendum on the leader’s mandate. Last Thursday, Chavez addressed the nation, accepting the preliminary results from the National Electoral Council, calling for the recall referendum. International observers from the Organization of American States and the Carter Center congratulated all Venezuelans for their exercise of democratic rights.

Chavez congratulated the opposition for finding democratic and constitutional ways to try to oust him. His opponents, who accuse him of being a «Castro-communist» dictator, have unsuccessfully attempted to remove him from power through a coup d’etat in 2002, a lock-out/strike and oil industry sabotage at the end 2002 and at the beginning of 2003, and through several strikes. 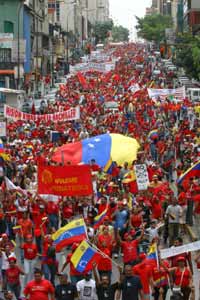 «The will of the majority has prevailed. There will be no dictatorships, no civil war, no foreign intervention, no street chaos. The path of participatory democracy is open», said the President, who labels the referendum as a victory of the democratic revolutionary movement he claims to lead.

Chavez said that he did not think it was impossible for his opponents to gather support from at least 20% of the registered electorate. About 12 million Venezuelans are registered to vote. “With the 2,451,000 signatures they collected, they can’t kick me out of the government,” he said. According to the Constitution, which allows the people to recall elected officials, a recall referendum must have the support of more voters than those obtained by the official when elected. Chavez won the 1,999 elections with 3,750,000 votes. The President’s supporters can also vote in the referendum, and can allow the President to stay if their votes outnumber those of the opposition.

«In two months we will face them [the opposition] to fight the battle for the future of Venezuela» , the President said.

The US government was mentioned once again by the leftist president, which he accesses of leading a campaign to oust him. «As you and I know, this battle goes beyond Venezuela, because the US government is behind Venezuela’s opposition. Mr. George W. Bush is the real instigator and the driving force behind those movements that charge against us», he said. 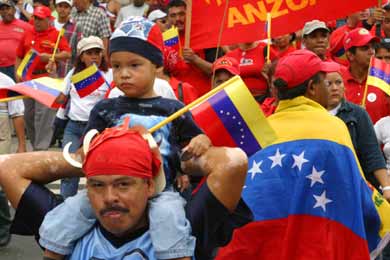 As expected, Chavez dissolved the Comando Ayacucho, the coalition of political leaders from parties that support him, which coordinated their efforts against the presidential recall and for the recall of opposition lawmakers. Supporters of the president blame that coalition for the failure to prevent an alleged fraud committed by the opposition during the signature collection and signature re-verification processes by using forged documents. The Comando Ayacucho has been replaced by the Comando Maisanta in honor of Chavez’s great-grandfather, a 19th century rebel fighter who led several uprisings and battles in the Venezuelan llanos. Chavez will be the head of the new coalition.

Grassroots groups who support Chavez plan to implement their own electoral coalitions to help him win the recall. Among their tasks will be to register voters, and watching out for fraudulent activities from the opposition.

The recall referenda against Chavez and nine opposition lawmakers will take place sometime during the first two weeks of August.