I would like to respond to Mary O’Grady’s recent column ("Observers Rush to Judgment in Caracas," Aug. 20) about The Carter Center’s role in the Venezuela recall referendum. 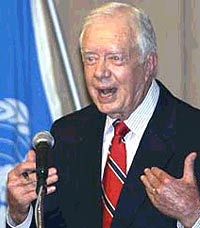 The Carter Center has monitored more than 50 troubled democratic elections, all of them either highly contentious or a nation’s first experience with democracy. We are familiar with potential fraudulent techniques and how to obtain a close approximation to the actual results to assure accuracy.

One of our prerequisites for involvement is to be invited by all major political parties and by the central election commission, so it is necessary for us to remain absolutely neutral. These criteria obviously apply to Venezuela.

In 1998, Hugo Chavez was elected president of Venezuela. There was a subsequent referendum to approve a new constitution, and in 2000, another nationwide election for local, state and national offices, with Mr. Chavez prevailing by close to 60% in both presidential elections. Accuracy of results was accepted, but the opposition remained determined to remove him from office.

A military coup against Mr. Chavez was successful in April 2002, but an aroused Venezuelan public and condemnation of the coup by Latin American governments resulted in Mr. Chavez being restored to office after two days in custody. The next attempt to depose him was a series of nationwide strikes that shut down oil production and almost destroyed the nation’s economy. The government survived, but the political confrontation continued.

In January 2003, I proposed that a provision in the new constitution be implemented, providing for a referendum on whether Mr. Chavez should leave office or complete his term. Both sides agreed to this proposal, and the Organization of American States joined our Center in monitoring the gathering of necessary petitions and observing a recall referendum.

An organization known as Súmate served as the opposition’s driving force in encouraging signatures to depose Mr. Chavez and providing technical advice for their campaign efforts.

The Aug. 15 vote was the culmination of this process, and extra care was taken to ensure secrecy and accuracy. An electronic system was developed by a Venezuelan-American consortium led by SmartMatic that permitted touch-screen voting, with each choice backed up by a paper ballot. International machines were tested in advance, and we observed the entire voting process without limitation or restraint.

During the voting day, opposition leaders claimed to have exit-poll data showing the government losing by 20 percentage points, and this erroneous information was distributed widely. Results from each of the 20,000 machines were certified by poll workers and party observers and transmitted to central election headquarters in Caracas. As in all previous elections, paper ballots were retained under military guard.

As predicted by most opinion polls and confirmed by our quick count, Mr. Chavez prevailed by a 59% to 41% margin.

Subsequently an audit was conducted to assure compatibility between manual ballots and electronically transmitted data, but opposition leaders insisted that their exit polls were accurate and that all other data were fraudulent. We met the following morning with Súmate, and they reported their own quick count showing a 10% government victory.

Since their only remaining question was the accuracy of the audit, we developed the procedure for a second audit. Súmate and election commission members (government and opposition) agreed with our proposal. The second audit revealed no significant disparities.

Our responsibilities do not end when votes are counted. We seek acceptance of the results by all sides, and reconciliation if distrust or disharmony is deep.

We have already begun efforts to establish a dialogue between the Venezuelan government and the still-antagonistic opposition leaders.

When local citizens or foreigners disapprove of a political decision made in free and fair elections, the only legitimate recourse is to honor the decision, cooperate whenever possible, and promote future leadership changes through democratic means.

Baptist Pastor Jimmy Carter is former President of the United States (1977-1981). He was awarded with the Nobel Peace Prize in 2002 and chairs the Carter Center based in Atlanta .

«Erosion of the Non-Proliferation Treaty»

State of the Union Address 1980