"A Palestinian State: when?" 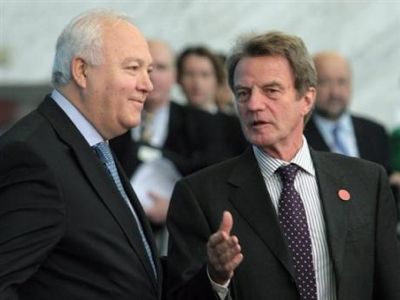 Two years on, the Annapolis Process has proved a disappointment, but marked progress has been made on building the Palestinian State’s foundations, providing today a firm basis for resuming the Israeli-Palestinian negotiations with a view to a peace agreement.

This progress is due to two main factors: firstly the indisputable success – unprecedented for a donors’ conference – of the Paris Conference which led to the actual disbursement of $5.5 billion (€4.068 billion). Promises were kept: the Palestinian Authority’s budget was financed, development projects were carried through and the country’s humanitarian needs addressed.

But the international community’s solidarity would be fruitless had the Palestinian Authority not initiated a series of tough, credible reforms based on financial transparency and fighting corruption. These reforms, implemented by Palestinian Prime Minister Salam Fayaad’s government, have demonstrated at the practical level the Palestinian Territories’ economic potential. The institutions are functioning more effectively, security of goods and people is better guaranteed and private investors are returning. The markedly fewer obstacles to freedom of movement imposed by the Israeli army and cooperation between the Israeli and Palestinian security forces have also played their part in this return to economic growth (8% in 2009).

Is this enough? Of course not. While the budgetary, security and institutional foundations of the Palestinian State are being laid, it still has to be fleshed out at political and international level.

The building of the Palestinian State is today a goal shared by everyone. So France and Spain particularly welcomed the Bar-Ilan University speech of the Israeli Prime Minister, Mr Netanyahu, and the announcement of a moratorium, albeit temporary and limited, on settlement construction.

However, the political process has not yet come to a successful conclusion, despite George Mitchell’s efforts. It remains out of sync with the efforts of the donors, and particularly the European Union, which is providing over 50% of the aid for Palestine. And in order to pursue their efforts, the moderates on both sides and donors need to be rewarded by the opening-up of a genuine political way forward.

Europe has constantly worked to this end, in liaison with Palestinians and Israelis and closely with the United States. Our meeting, together with Catherine Ashton, with George Mitchell in Brussels on 12 January testifies to this, as does the Foreign Affairs Council’s adoption on 8 December 2009 of ambitious conclusions on the Middle East.

Europe must now face up to its responsibilities. It must not confine itself to the necessary, but often incantatory, reiteration of the inexorable outlines of the final settlement: absolute security for Israel, recognition when the time comes of a Palestinian State on the basis of the 1967 borders with land swaps, and Jerusalem as the capital of the two States. Europe must today move forward by proposing political, security, and financial guarantees to help Israelis and Palestinians overcome the "peace risks". This interminable conflict has to be resolved. Here, the European Union must play its part not only because it is friends with Israel and the Palestinian Authority, but above all because its long-term security is at stake: in this region, other far more worrying threats are capitalizing on the Palestinian deadlock for the purpose of propaganda and as a political diversionary tactic.

So the time has come to give the parties assurances on the irreversible nature of the process Europe is keen to engage. We have to give the Israeli people the assurance that their security and Jewish identity will be guaranteed; the Palestinian people must be given the certainty of recovering dignity by gaining the right to live in a viable, democratic and independent State.

To succeed in meeting this challenge, Europe must work with its partners in the Quartet for Peace – the United States, Russia and the United Nations – and the Arab League Monitoring Committee, which includes several important Arab countries, such as Egypt and Jordan. It will also be able to rely on the contribution of the Arab peace initiative. We must propose, going beyond "proximity talks", which are today necessary but insufficient, a limited negotiating timetable on all the final status issues (security, borders, water, refugees and Jerusalem) and an effective serious monitoring mechanism, which takes on board the errors of the past.

Right now, Europe could, on the ground, promote simultaneously to both parties bold confidence-building measures to help bring about the relaunch of the negotiations which must take place immediately. It could also host a summit conference for peace creating the conditions for bolstering and monitoring this dynamic, and encouraging the resumption of the contacts so as to achieve a definitive peace between Syria and Lebanon and Israel.

On its conclusion, Europe, as it has already pledged to do, would collectively recognize the Palestinian State so that Palestine at last becomes a fully-fledged member of the community of nations, living in peace and security alongside the State of Israel. Next year will mark the twentieth anniversary of the Madrid peace conference, when the peace negotiations began. There is no more time to lose. Europe must pave the way. This is the essential message conveyed to President Abbas during his visit to Paris on 21 and 22 February.