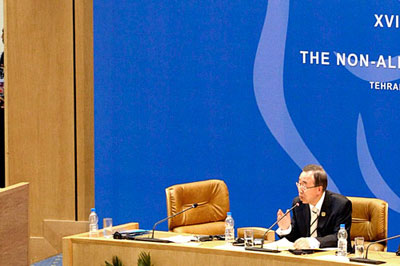 I thank our hosts for organizing this important Summit of the Non-Aligned Movement and I would like to pay tribute to Egypt as the outgoing chair of the last three years.

I am grateful for the hospitality of the Government and people of the Islamic Republic of Iran. The recent earthquake saddened us all. The United Nations stands ready to assist in any way.

Last month, I visited the Brijuni Islands in Croatia in what was once Yugoslavia. Gamal Abdel Nasser, Jawaharlal Nehru and Josip Tito met there in 1956 to help define the Non-Aligned Movement in its early days.

The leaders agreed that: “Peace cannot be achieved through division but by working for collective security on a world scale and by expanding the region of freedom…”.

At that time, nations and people were speaking of freedom from superpower rivalries and colonial domination. But freedom has other meanings, as well.

Since the last NAM Summit in Sharm-el-Sheikh in 2009, this part of the world has been at the epicentre. Tunisia. Egypt. Libya. Yemen and beyond.

The Arab Spring was not imposed or exported. It did not arise from an external conflict or dispute between states.

It came from within — from people. People who stood up for a better future.

People who spoke out for universal values.

In some places this has brought transformation and new beginnings, but in others, we see suppression and frustration.

That is why I have urged world leaders to listen seriously and sincerely. Listen to the appeals of people – for justice, for human rights, for dignity.

Today, the Non-Aligned Movement represents nearly two out of three members of the United Nations. You contribute four out of five United Nations peacekeepers.

I thank you for those tremendous contributions.

As we look ahead together, we must build on our strong partnership.

You represent diverse societies joined by common goals. I urge you to unite as well to promote and protect the values embedded in the United Nations Charter and the Universal Declaration of Human Rights, including freedom of expression and freedom of association.

For much of your membership, this internal effort should be the next frontier of action for your people.

Our organizations must keep pace in changing times. Long-held assumptions may need to change.

In too many places, for example, military spending continues to dwarf investments in people. Climate change is a clear and present danger. Too many women are still denied opportunity.

NAM members include some of the world’s youngest societies.

We must guide these youth to a world that resolves problems through cooperation, not confrontation.

Yet tragically, too often, conflict has replaced dialogue.

We see far too many political disputes within and between states in the Non-Aligned Movement.

I am concerned, for example, with the failure of Sudan and South Sudan to finalize their borders and prevent further bloodshed.

In the Democratic Republic of the Congo, the security situation and sexual violence against women remain a source of deep concern. We continue to closely follow the unrest in Mali that has profound implications for the region. I commend the African Union for its firm stand against unconstitutional changes of government.

I urge all NAM members to work within the principles of the UN Charter to resolve disputes peacefully.

But it is not sufficient to focus on lowering tensions between NAM countries, as important as that is. We must prevent conflict between all UN member states. And from this platform – as I have repeatedly stated around the world — I strongly reject threats by any member state to destroy another or outrageous attempts to deny historical facts, such as the Holocaust.

Claiming that another UN Member State, Israel, does not have the right to exist, or describing it in racist terms, is not only utterly wrong but undermines the very principles we have all pledged to uphold.

Today the United Nations and the NAM face the supreme challenge of answering people’s aspirations.

I see two paths for rising to this challenge: prevention to help deal with a society’s political grievances; and sustainability to help address society’s developmental challenges.

With your support, we are improving the capacity of the United Nations to respond early to conflicts.

Syria is only the latest example of what happens when that truth is ignored.

The crisis in Syria started with peaceful demonstrations that were met by ruthless force. Now, we face the grim risk of long-term civil war destroying Syria’s rich tapestry of communities.

Those who provide arms to either side in Syria are contributing to the misery. Further militarization is not the answer. The situation cannot be resolved with the blood and the bodies of more than 18,000 people and counting.

There should be no more bullets and bombs.

I urge all parties, in the strongest possible terms to stop the violence now. The Syrian government has the primary responsibility to resolve this crisis by genuinely listening to the people’s voices.

Our diplomatic efforts will be led by the Joint Special Representative of the United Nations and the League of Arab States, Mr. Lakhdar Brahimi. He will need the united support of the international community.

And all who have influence must be part of the solution to this crisis and work in close cooperation with the Joint Special Representative.

There is no threat to global peace and harmony more serious than nuclear proliferation.

Assuming the leadership of the NAM provides Iran with the opportunity to demonstrate that it can play a moderate and constructive role internationally. That includes responsible action on the nuclear programme which is among the top concerns of the international community.

This concern has been demonstrated in repeated Security Council resolutions, including under Chapter VII authority, calling for transparency and full cooperation with the International Atomic Energy Agency (IAEA).

For the sake of peace and security in this region and globally, I urge the Government of Iran to take the necessary measures to build international confidence in the exclusively peaceful nature of its nuclear programme.

This can be done by fully complying with the relevant Security Council resolutions and thoroughly cooperating with the IAEA.

I urge, also, constructive engagement with the P5+1 to quickly reach a diplomatic solution.

And I urge all the parties to stop provocative and inflammatory threats.

A war of words can quickly spiral into a war of violence. Bluster can so easily become bloodshed.

Now is the time for all leaders to use their voices to lower, not raise, tensions.

Let me also note that efforts to create a Middle East zone free of nuclear weapons and all other weapons of mass destruction are under way.

Let us remember that it was Iran itself, 38 years ago, that proposed the establishment of a nuclear-weapon-free zone in the Middle East.

As Secretary-General, I am absolutely committed to achieving a world free of nuclear weapons and other weapons of mass destruction. I also share your desire to strengthen controls against the illicit arms trade. Let us keep working for these common goals.

There can be no talk of international or national security without focusing on sustainable development.

We have made important progress in reducing poverty, yet inequality is rising. And last year, official development assistance decreased for the first time in years.

We must intensify our work to meet the Millennium Development Goals and bolster resilience to environmental, economic and social shocks.

While staying focussed on what must be done now, we are also looking ahead – looking to define a post-2015 global development agenda that is both bold and practical.

This includes follow-up to the Rio+20 Conference, where the international community agreed to establish universal sustainable development goals (SDGs). We need your political leadership and the full engagement of the NAM and the G-77 and China group.

In this period of profound transition, NAM continues to define its evolving identity and address changing notions of sovereignty in an age of interconnectedness.

As you engage in that process, your role at the United Nations will remain crucial.

We must also keep working together for greater democratic governance in international decision making. That includes strengthening the UN from within and working to ensure that global institutions and bodies – including the Security Council – accurately reflect the realities and dynamics of today’s world.

The United Nations and the Non-Aligned Movement have a close history over fifty years. Guided by our shared principles of peace, justice and equality, let us work together to meet the pressing challenges of our time.

I thank you very much for your leadership.

Remarks by Ban Ki-moon at the 68th UN General Assembly

The NAM Summit, Iran, and Syria: A Coup against the West?
Can the NAM Summit bridge the Iran-Egypt Gap?