The Day the West Likes to Forget

History is being rewritten by Nato. World War II would not have been an internal conflict of capitalism but a glorious struggle of democracy against Nazism. The Soviet Union would therefore have not played a significant role in the conflict. On the contrary, his regime would have made the longest possible alliance with Evil. This propaganda does not stand up to the facts. 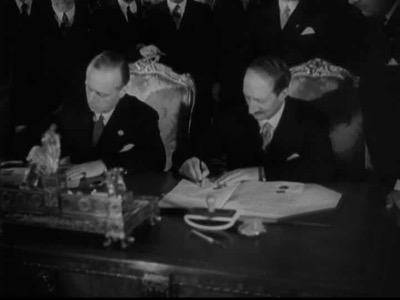 How often have you heard about the Nazi-Soviet non-aggression pact, concluded on 23 August 1939? On that day Adolf Hitler and Iosif Stalin, those two peas in a pod, according to the western Mainstream Media, “carved up” eastern Europe from the Baltic to the Black Seas. The gates were opened to World War II. Stalin stabbed Britain and France in the back, the so-called western democracies, actually the two largest colonial empires in the world.

To make sure you don’t forget that date, apart from the frequent references to it in the Mainstream Media, August 23rd is now designated the “European Day of Remembrance for Victims of Stalinism and Nazism”. In 2008 the European Parliament came up with the brilliant idea to have “a Europe-wide Day of Remembrance for the victims of all totalitarian and authoritarian regimes, to be commemorated with dignity and impartiality.” It has been observed annually since 2009. Various centre-right political groupings inside the European Parliament, along with the NATO (read US) Parliamentary Assembly initiated or backed the idea. It was not a coincidence that in 2009, the Organisation for Security and Cooperation in Europe (OSCE), meeting in Lithuania, also passed a resolution “equating the roles of the USSR and Nazi Germany in starting World War II.” The OSCE resolution bears no relation whatsoever to what actually happened during the 1930s. It is an attempt to “rewrite” history. Naturally, all this anti-Stalinist and anti-Soviet grandstanding has another purpose: to attack the Russian Federation and Vladimir Putin, the bull’s eye of western Russophobes.

There is another date which might have been a better choice for commemoration, if Europe really wanted to remember how World War II began. I would propose 30 September 1938. On that day British Prime Minister Neville Chamberlain and French Premier Édouard Daladier met with Hitler and his amanuensis, Italian fascist Benito Mussolini, in Munich to carve up Czechoslovakia. Neither Czechoslovak nor Soviet diplomats participated in the meetings; Hitler did not want them there. The führer demanded the Sudeten territories with their majority German populations. Self-determination was the pretext, but the real purpose was to destroy Czechoslovakia, an obstacle to German domination in Europe, and to isolate the USSR, a Czechoslovak ally. The September 30, 1938, Neville Chamberlain (UK), Edouard Daladier (France), Adolf Hitler (Germany) and Benito Mussoli (Italy) signed the Munich Agreement. They put an end to Czechoslovakia in the absence of its representative.

In point of fact the USSR did everything it reasonably could do to support European collective security and Czechoslovak resistance against Nazi aggression. It was the French and British, especially the latter, who shirked the fight. The French were craven. The French foreign minister, Georges Bonnet, reckoned France could not fight and that if it did, it would face defeat and communist revolution. Stalin’s great Nemesis, L. D. Trotskii, liked to say that war was often the mother of revolution, and Bonnet and many of his French colleagues agreed.

Chamberlain was less craven and more determined not to be dragged into a war for a doomed, unviable state. According to Bonnet, Czechoslovakia was nothing for the British but “rags and patches stitched together by the Versailles Treaty… No one should die to protect [it].” Chamberlain thought he could come to terms with Herr Hitler, and Czechoslovakia was a small price to pay to get an agreement. Chamberlain told Opposition leaders in the House of Commons that Hitler was “an honourable man”, who would keep the peace after having obtained the Sudeten territories. When the leaders of the Opposition expressed their doubts, Chamberlain reacted irritably. “I have met Hitler,” he said, “and I believe him.” Fatuous words, as it turned out, because rump Czechoslovakia disappeared a few months later in March 1939. 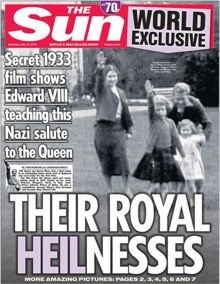 In 1933, the future King Edward VIII of England taught the Nazi salute to the future Queen Elizabeth II. The king was forced to abdicate in 1936. But Elizabeth married Prince Philip whose Nazi adolescence was known. In 2005, Prince William celebrated Holocaust Day by attending a fancy dress party as a Nazi officer.

“You want war!” was the chief accusation of Tories and the European right hurled against those who sought to organise resistance against Nazi aggression. Stalin understood. When in 1939 the British and French still hesitated to organise a common defence against Nazi Germany, Stalin concluded with Hitler. For the Soviet government Munich was the camel breaking straw which led directly to the Nazi-Soviet non-aggression pact. The Munich accords and the non-aggression pact were also two peas in a pod. People at the time were furious because Stalin had succeeded where they had failed the previous year at Munich. It was sauve qui peut, never a good long-term security strategy. It only encourages the aggressor, as Stalin would find out in June 1941.

Many historians have tried to defend Chamberlain’s selling out of Czechoslovakia. Britain was not ready for war and had to bide its time. Let’s give credit where credit is due. Chamberlain’s historian-defenders have done a lot of research and spilled a lot of ink to restore his reputation. I do not think they have succeeded however. Critics at the time had it right. According to the Manchester Guardian in early 1939, British appeasement was “a clever plan of selling off your friends in order to buy off your enemies.”

If any state deserves condemnation for sabotaging collective security during the 1930s, it is Britain, not the USSR. The British repeatedly rejected Soviet proposals for an anti-Nazi alliance, or blocked the French from improving relations with Moscow. And you know France, always acting like an Anglo-Saxon satellite, then it was Britain, now it’s the United States. 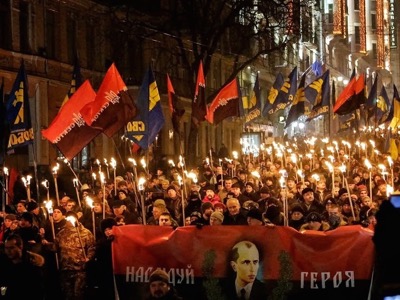 Torch march through the streets of Kiev, organized by parties PARVY Sektor and Svoboda, in honor of Stefan Bandera.

Today everything has changed, but nothing has changed. During the Interwar Years, fascism was attractive to capitalist elites afraid of socialism and the USSR. After World War II fascism again became attractive to western “liberal” elites, clandestinely at first, more openly now. The EU in its Russophobic posturing, condemned “the holding of public demonstrations glorifying the Nazi or Stalinist past”, but somehow the Nazi pea fell out of the pod. There are demonstrations in the Baltic states remembering SS soldiers who fought with Nazi Germany against the Red Army. And what can one say about the Ukraine? Stepan Bandera, the Nazi collaborator, and Hitler are celebrated without any embarrassment. Right Sector brownshirts represent the vanguard of the Kiev junta, which overthrew the elected Ukrainian government in a western backed coup d’état. For all intents and purposes the Ukraine is a fascist state. The EU and the United States deny it. It’s only a few “bad apples” in Kiev, but of course there are none so blind as those who will not see.

If I were a MEP, I would propose that the European Parliament remember 30 September 1938, the day the west sold out Czechoslovakia and put paid to collective security against Nazi Germany. For that misdeed Britain, not the USSR, was the main guilty party. It’s a hard thing to live down even now, which is why you won’t hear anything about it in the Mainstream Media.

At least the Czechoslovaks had a functioning democracy, the only one in central or eastern Europe at the time. The Baltic states and Poland were full of fascist sympathizers or fascists and anti-semites. What ever happened to western “values”? The “values” of course are bogus, unless you mean hypocrisy, double standards, and Russophobia. Naturally, if I were a MEP, I would be treated as a kook or a Putin agent. As a historian, I could get the same reaction, but that’s a risk I am willing to take.

The Skripal Affair: A Lie Too Far?