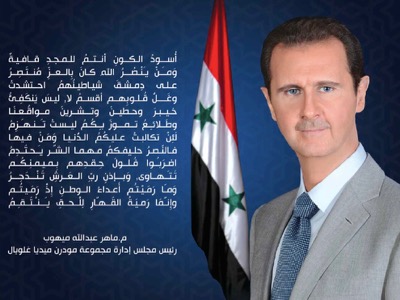 Time and History are closely linked but people will not remember Time. What they will remember is History. And Time is only transformed into History when great changes in the world decide it to be so.

The same is true when we speak of global politics before and after the Soviet Union or before or after the World Wars.

I think that when Aleppo is set free, we will say that there is “a before and an after Aleppo” and that Time is being transformed in History, not only for Syria and the region, but for the world.

And this is far greater than the word «mabruk» [“Good tidings” in Arabic]. Everyone is wishing one and other, in person or through social networks, repeating this word: “good tidings”.

I do not wish to repeat this word but rather to declare that what is happening today is History, which each Syrian citizen is writing; his story that began about six years ago, when the crisis first broke out, when war was first declared against Syria.

President of the Syrian Arab Republic (since 2000).