Permanent Representative of the UK to the Organisation for the Prohibition of Chemical Weapons, on the use of a nerve agent in the UK 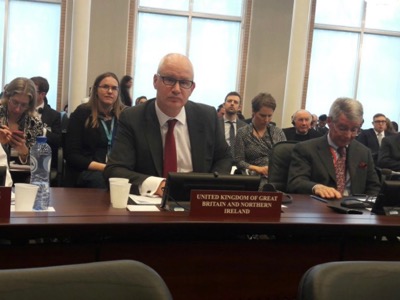 Mr Chair, Director General, when I spoke to this Council yesterday I asked your permission to address this Council Session again to update on developments concerning the use of chemical weapons in Salisbury, and the poisoning of Sergei and Yulia Skripal with a ‘Novichok’: a military-grade nerve agent developed by Russia. Based on this capability, combined with Russia’s record of conducting state sponsored assassinations – including against former intelligence officers who they regard as legitimate targets – the UK government concluded that it was highly likely that Russia was responsible for this reckless and despicable act.

We have engaged bilaterally with the Russian Federation. On 12 March my Foreign Secretary summoned the Russian Ambassador to London and sought explanations from his government within 24 hours. As my Prime Minister has said, we offered the Russian government the opportunity to provide an explanation. We explained to Russia that if it had somehow lost control of its stock, it needed to immediately provide full disclosure of the programme, and account for this loss. But their response has demonstrated complete disdain for the gravity of these events.

Russia has provided no explanation; and no meaningful response.

Instead they have treated the first ever aggressive use of a nerve agent in Europe with sarcasm, contempt and defiance.

As my Prime Minister said in the United Kingdom’s Parliament this afternoon, there can be no alternative conclusion other than that the Russian State was culpable for the attempted murder of Mr Skripal and his daughter – and for threatening the lives of other British citizens in Salisbury, including Detective Sergeant Nick Bailey. This represents an unlawful use of force by the Russian State against the United Kingdom.

It also represents a violation of the fundamental prohibition on the use of chemical weapons contained in Article 1 of the Chemical Weapons Convention.

Russia’s attempt to hide behind a false interpretation of Articles in the Chemical Weapons Convention should fool no one. We asked for clarification on a matter of urgent national security for the United Kingdom, concerning a serious violation of the Chemical Weapons Convention. Russia has provided none. Instead of engaging on the substantive concern, Russia has sought to mire us and this Executive Council in procedural argument. Article 9 does not oblige states which are the victims of chemical weapons to refrain from seeking rapid response to their immediate and urgent concerns. Not only that, as you have all heard in this room yesterday, the Russians have stated that they regard the premise of our question – the findings of our investigation to date – as based on lies.

We have also been scrupulous in briefing the OPCW Technical Secretariat. On 8 March we notified the Technical Secretariat of the incident. My Foreign Secretary called the Director General on 12 March to update him on the facts of the case. I have briefed the Director General, most recently today, and my Prime Minister is writing to him with a further update. We have welcomed the offers of assistance from the Director General and the Technical Secretariat. And, as my Prime Minister said in the UK Parliament earlier today, we are working with the police to enable the OPCW to independently verify our analysis. This horrendous incident is now the subject of a UK criminal investigation, and we have legal obligations as a result to ensure that we share our information only in accordance with the law.

Russia will complain that we have not shared any samples. There are no provisions in the Convention that require the UK to share its samples collected as part of a criminal investigation with Russia in this type of scenario.

Mr Chair, British citizens have been endangered. It was an indiscriminate, brazen and reckless act against the United Kingdom, which put the lives of British citizens at risk. There is a real urgency to resolve this situation.

Given what Russia said in this Council yesterday – that our case was founded on lies and dirty information – it is clear that Russia does not plan to address our substantive concerns.

Mr Chair, nobody can doubt our commitment to the CWC, particularly at a time when there has been a use of chemical weapons on our territory against our citizens. We will continue to work with the Technical Secretariat, and will keep this Council informed of developments.

Source : “Permanent Representative of the UK to the Organisation for the Prohibition of Chemical Weapons, on the use of a nerve agent in the UK”, by Peter Wilson, Voltaire Network, 14 March 2018, www.voltairenet.org/article200217.html

Deputy permanent representative to the United Nations (2013-17). British Ambassador to the Netherlands (since 2017).

Source : “Permanent Representative of the UK to the Organisation for the Prohibition of Chemical Weapons, on the use of a nerve agent in the UK”, by Peter Wilson, Voltaire Network, 14 March 2018, www.voltairenet.org/article200217.html