NATO’s right to reply, response by Manlio Dinucci and comment by the Voltaire Network

The public relations service of the NATO Joint Force Command in Naples wrote to the daily Il Manifesto about Manlio Dinucci’s article « In the USA/NATO grip ». They did not send us a copy of this letter, even though it also pointed out a mistake made by our English translator. In the past, the US State Department directly contacted the news outlets whose articles we publish in several languages, pressuring them to cease all collaboration with us. However, this approach seemed impossible with a Communist publication. Here we print the letter, the response given by the Italian geographer, and our comment. 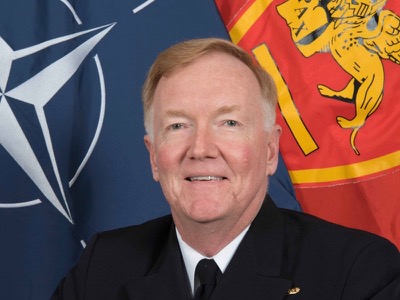 To Madame Rangeri,
(director of the publication Il Manifesto)

I would ask you note that the article entitled « In the grip of the USA and NATO », published on 13 March 2018 and signed by Manlio Dinucci, contains information which is inaccurate and deceptive.

Paragraph 3 :
It is incorrect to write that - « The exercise is to be directed by NATO Command in Lago Patria (JFC Naples), under the orders of US Admiral James Foggo ».
It is true that – NATO Maritime Command (MARCOM), whose headquarters are at Northwood in Great Britain, assumes the command and control of the exercise, which is overseen by Admiral Clive Johnstone.

Paragraph 4 :
It is incorrect to write the following - « It was Admiral Foggo himself who explained the purpose of the Dynamic Manta 2018 exercises - the "Fourth Battle for the Atlantic" began after the battles of the two World Wars and the Cold War ».
However, it is true that – in his article entitled « The Fourth Battle of the Atlantic », published in 2016, Admiral Foggo had shared indications concerning the vision of NATO and the United States. However, this mutual vision can not be used to « explain » Dynamic Manta 2018. I refer you to MARCOM’s publication on the subject of Dynamic Manta 2018 on its Internet site mc.nato.int.

Paragraph 6 :
It is incorrect to write that - « In his position as NATO Commander, he is preparing in Italy the Allied Naval Forces against Russia, while in his position as Commander of US Naval Forces in Europe, Admiral Foggo is sending the 6th Fleet from Italy to the Juniper Cobra 2018 US/Israëli joint exercise, which is directed mainly against Iran ».
It is true that - Admiral Foggo is leading the JFC Naples in the « preparation, planification and realisation of military operations aimed at preserving the peace, security and territorial integrity of the member states of the Alliance… ». For further details, you may consult the Internet site of the Allied Joint Force Command Naples, under the heading « Mission statement ». Furthermore, in the English version of your article, the use of the term « Captain » is inappropriate. The correct term is « Commander ». Concerning the Admiral’s national competences, you may benefit from a visit to the Internet site www.c6f.navy.mil.

I would like to bring to your attention another inaccuracy in the final paragraph of the article we are discussing – this concerns the author’s statement that « Since Scaparrotti is also the Supreme Allied Commander in Europe (a responsibility which is always traditionally assumed by a US General), the plan anticipates participation by NATO, particularly represented by Italy, in support of Israël, in a large-scale war in the Middle East ».

The true concept is as follows - Juniper Cobra is a bilateral Israëli-US exercise. Besides which, any intervention by NATO requires the unconditional approval of the Atlantic Council. This is an important aspect which the author overlooks entirely.

While I appreciate, in general, the article you have published, I would ask you to correct your version on line with the modifications noted above, and sincerely hope that our mutual collaboration may last.

Richard W. Haupt
Captain of the US Navy, head of the Public Relations Service of the NATO JFC Command, Lago Patria, Naples.

We appreciate the attention that NATO brings to our publication. Il Manifesto and myself take note of the rectification – the only one which is accurate, and, frankly, no more than a detail – concerning the specific command of Dynamic Manta 2018.

For the rest, in any case, the role of the JFC Lago Patria, Naples, one of the two permanent commanders of the NATO Joint Force at the operational level remains centralised under the orders of US Admiral James Foggo.

The Admiral commands both the US Naval Forces for Europe and Africa and the US 6th Fleet, whose area of responsibility covers half of the Atlantic Ocean and the adjacent seas, including the Mediterranean.

During a seminar in Norway on 26 February, the Admiral spoke about the « Fourth Battle of the Atlantic » against « increasingly sophisticated Russian submarines which menace the lines of maritime communication between the United States and Europe » [1].

Since these lines also cross the Mediterranean, the Dynamic Manta 2018 exercise also enters into this « NATO/USA vision ». It’s a false vision – what proof do we have that Russian submarines wait in ambush, ready to sink ships along the maritime lines between Europe and the United States ?

It is also false to claim that the JFC Naples has a mission for the « preparation, planification and realisation of military operations aimed at preserving the peace, security and territorial integrity of the member states of the Alliance… ».. We only have to remember the wars by which NATO destroyed two states, Yugoslavia and Libya, which posed no threat whatsoever to the members of the Alliance.

Concerning the presence of General Scaparrotti in the Israëli/US joint exercises (to which Foggo sent the Admiral of the 6th Fleet), it would be ingenuous to ignore the fact that he is not only the commander of the European Command of the United States, but at the same time the Supreme Allied Commander in Europe.

Finally, by simple curiosity – on the basis of what norm must the Supreme Allied Commander in Europe traditionally be a US General?

Thank you once again for your attention to our work.

It is absolutely false to write - « Any intervention by NATO requires the unconditional approbation of the Atlantic Council. This is an important aspect which the author completely overlooks ».

It is indeed a very important point – the bombing of Tripoli (Libya) by NATO was perpetrated not only in violation of Resolution 1973 of the UN Security Council, which mandated NATO with the protection of the civilian population, but also in violation of the statutes of the Organisation.

Never, absolutely never, did the North Atlantic Council give its approbation for the massacre which cost the lives of approximately 40,000 people, the great majority of whom were civilians.

The fact that the United States and certain of their allies trampled all over the rights of other allies speaks volumes about the reality of this pseudo-alliance.

[1] “The Fourth Battle, he argued, wages primarily beneath the waves, as increasingly sophisticated Russian submarines threaten the ability of NATO to exercise sea control in the North Atlantic, and consequently the sea lines of communication between the United States and Europe. Russian military activity is also becoming more aggressive, Admiral Foggo asserted. Russian aircraft flying very close to US vessels at high speed are examples of such behaviour”. Source : “Admiral Foggo to Norway ahead of Trident Juncture”, Institutt for Forsvarsstudier, 2. mars 2018.