Towards a Post-War in the Greater Middle East

Contrary to the picture portrayed by Atlanticist propaganda, Thierry Meyssan takes a long-term view of international relations. For him, what we have seen in Syria over the last seven years is not a civil war, but rather a seventeen-year regional war in the greater Middle East. This vast conflict, from which Russia emerges victor over NATO, is gradually giving rise to a new world equilibrium. 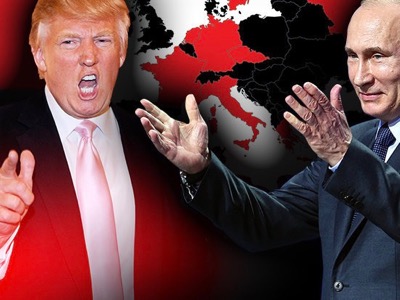 All wars end with winners and losers. The seventeen years we have just lived through in the "Greater Middle East" is no exception. Yet, while Saddam Hussein and Muammar Gaddafi have been eliminated and Syria is winning, the only real losers are the Arab people.

At the most, one can pretend to believe that the problem concerns only Syria. And that in Syria, it is circumscribed to Ghouta. And that in Ghouta, the Army of Islam has been defeated. Yet, this episode will not be enough to declare the end of the hostilities that have ravaged the region, destroyed entire cities and killed hundreds of thousands of men, women and children.

Nevertheless, the surviving myth that "civil wars" spread by contagion [1] allows the 130 states and international organizations that participated in the "Friends of Syria" meetings to shirk their responsibilities and to hold their heads high. Furthermore, since they will never admit failure, they will continue to perpetrate their abuses in other theaters of operation. In other words: their war will soon be over in this region, but it will resume elsewhere.

From this point of view, what has played out in Syria since the US declaration of war nearly 15 years ago - i.e. when the Syrian Accountability Act was passed into law in December 2003 - will have shaped the world Order that is currently emerging. Indeed, while almost all the states in the "Greater Middle East" have been weakened or completely wrecked, Syria is the only one still standing and independent.

Consequently, the strategy of Admiral Cebrowski, designed to destroy the societies and states of non-globalized countries while compelling the globalized ones to ensure the security of the US military, allowing it to plunder the raw materials and energy sources in the destroyed areas, can not be implemented by the Pentagon either here or in any other region. Ajouter footnote de ton article!

Under President Trump’s leadership, the US Armed Forces have gradually ceased to support the jihadists and have begun to withdraw from the battlefield. This does not mean they have become philanthropic overnight , but simply realistic. This development should mark the end of their interventions against foreign states.

In the spirit of the 1941 Atlantic Charter in which London and Washington agreed to jointly control the oceans and world trade, the United States is now preparing to sabotage the trade of its Chinese rival. Donald Trump is reforming the Quad (together with co-members Australia, Japan and India) to limit the movements of the Chinese merchant fleet in the Pacific. Simultaneously, he named John Bolton as National Security Advisor, whose great achievement under the Bush Jr. Administration was to involve NATO Allies in the military surveillance of the oceans and global trade.

China’s grand "silk road" project on both land and sea is not likely to materialize for some time. Now that Beijing has decided to move its goods through Turkey instead of Syria and through Belarus instead of Ukraine, we should expect "disorders" to erupt in these two countries.

Already in the fifteenth century, China had tried to reopen the Silk Road by building a huge fleet of 30,000 men under the command of the Muslim admiral Zheng He. Despite the warm welcome received by this peaceful armada in the Persian Gulf, Africa and the Red Sea, the undertaking failed. The emperor had the whole fleet burned and China withdrew into itself for five centuries.

President Xi drew inspiration from this illustrious predecessor to envisage "the Road and Belt Initiative" but, like Emperor Ming Xuanzong, he could be led to scuttle his own initiative, notwithstanding the risk of losing the huge amounts already invested by his country.

For its part, the United Kingdom has not renounced its plan to instigate a new "Arab revolt", a scheme which in 1915 served to bring the Wahhabis to power, from Libya to Saudi Arabia. However, the so-called "Arab Spring" of 2011, which this time was meant to install the Muslim Brotherhood in power, was snuffed out by the Syrian-Lebanese resistance.

London intends to exploit the US "pivot to Asia" strategy to recover the influence it wielded during its former empire. The UK is poised to leave the European Union and has directed its armed forces against Russia. It has tried to secure the largest possible number of allies by manipulating the "Skripal case", but has suffered several setbacks, including New Zealand’s refusal to continue playing the docile "dutiful Dominion". Logically, London should redirect its jihadists against Moscow as it did during the wars unleashed in Afghanistan, Yugoslavia and Chechnya.

Russia is the only great power to have emerged victorious from the Middle East conflict, thereby achieving the goal set by Catherine the Great to gain access to the Mediterranean and save the cradle of Christianity, the bedrock of Russian culture.

Moscow is now expected to enlarge the Eurasian Economic Union, to which Syria applied to join in 2015. At that time, its membership had been suspended at the request of Armenia, reluctant to introduce a state at war into the common economic space, but now the order of things has changed.

The new world balance has been bipolar from the moment Russia unveiled its new nuclear arsenal. It is very likely that the world will be divided in two, not by an iron curtain, but by the will of the Western powers who are already in the process of separating the banking systems and will soon try to do the same with the Internet. On the one side, it should be based on NATO and, on the other, no longer on the Warsaw Pact but on the Collective Security Treaty Organization. In a period of about thirty years, Russia has turned the page of Bolshevism and has shifted its influence from the center of Europe towards the Middle East.

In a pendulum movement, the West - the former "free world" – has morphed into a set of coercive and falsely consensual societies. The European Union is endowed with a bigger and more oppressive bureaucracy than that of the Soviet Union. And Russia becomes once again the champion of International Law.

Source : “Towards a Post-War in the Greater Middle East”, by Thierry Meyssan, Voltaire Network, 4 April 2018, www.voltairenet.org/article200519.html

Source : “Towards a Post-War in the Greater Middle East”, by Thierry Meyssan, Voltaire Network, 4 April 2018, www.voltairenet.org/article200519.html