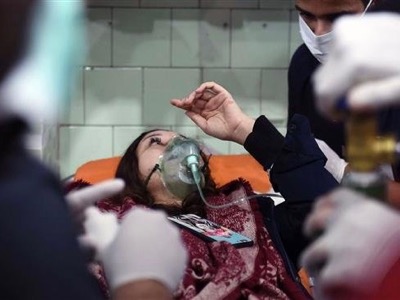 On November 24, Jabhat al-Nusra terrorists located in the Idlib de-escalation zone attacked several residential neighbourhoods in Aleppo, including Khalidiya, al-Zahraa and Nile Street, using shells filled with toxic substances. According to available information, as a result of the attack 73 civilians, mostly women, children and old people were hospitalised with symptoms of acute chemical poisoning (asphyxiation, nausea, damage to the upper respiratory tract, etc.). Eight of the injured are in serious condition. In addition, significant material damage was caused.

Moscow strongly condemns this terrorist attack against Aleppo’s civilians. We have repeatedly issued warnings and tried to draw the attention of the international community to the Idlib militants’ attempts, assisted by the White Helmets activists, to organise provocations involving the use of chemical weapons. According to our information, several dozen tanks with toxic substances, presumably chlorine, were delivered to the province of Idlib for this purpose at the end of October. The last such delivery to villages in close proximity to Aleppo took place on October 30.

In connection with the shelling of Aleppo, the SAR Government sent letters to the UN Secretary General, the UN Security Council Chairman and the OPCW Director General calling for immediate action to investigate the incident and send experts to the scene. It is necessary to make every effort, in the shortest possible time, to find and bring to justice those who have used toxic substances over all these years to intimidate peaceful Syrians.

Without a doubt, the barbaric attack on civilians in Aleppo deserves unconditional condemnation and should not go unpunished. We expect that the international community, which has repeatedly declared its categorical rejection of the use of chemical weapons in Syria, will properly respond to this attack. We presume that the OPCW, as the main international body authorised to substantiate the use of toxic substances, will conduct a timely and professional investigation in full compliance with the Convention on the Prohibition of the Development, Production, Stockpiling and Use of Chemical Weapons and on their Destruction.