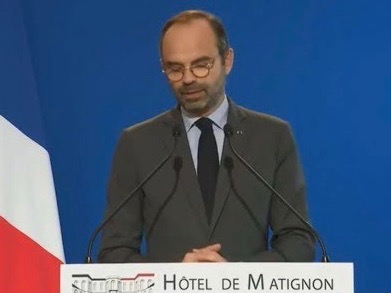 For more than three weeks, tens of thousands of French have expressed their anger, on roundabouts, tolls, near commercial areas or on the streets of a number of cities in France.

This anger comes from far. It has been brewing for a long time; it has often remained silent, held back by modesty and pride. Today it is expressed forcefully by a movement. You’d have to deaf and blind not to hear or see this anger. Like the President of the Republic, like all parliamentarians, I understand this anger and I take on board its reality, its force and gravity.

It is the anger of a France that is working hard and which is barely managing to make ends meet; the anger of the French that have their backs to the wall; the anger also of mothers of families who are raising their children alone. The source of this anger is profound injustice. The injustice of not being able to live with dignity from the fruits of your labour; of not being able to provide for what your children cry out for as the working day begins early and ends late, very late if you add the time it takes you to get home.

During the past few weeks, I have consulted many: social partners, local representatives, associations, Parliamentarians and the heads of every political party. I have listened to the French and to their representatives. I draw two primary conclusions.

The French that have put on a yellow gilet do love their country and they want two things: for taxes to come down and for their work to pay. Yet this is something that we also want. These are also our values. It is the heart of the commitment of the President of the Republic. And if I have not managed to express it, if the majority is barely convinced of it, it is what I owe and we must bring about some change. We have already taken strong measures on the purchase power (bringing down the housing tax and contributions). With the activity bonus and the increase in the statutory minimum wage from 1 January, the net SMIC will increase by more than 3%. This is one of the most significant increases for the last 25 years. Our aim is to ensure that work pays and we heard the message loud and clear from the French people to expedite reaching this target.

Furthermore, I am convinced that for the State to stay strong and firm, it must first guarantee public peace. Fixing the cap and keeping it, is a necessity for governing France. That said, no tax is worth endangering the unity of the Nation.

Since this movement started, four of our compatriots have met Death. Several hundreds of our fellow citizens, importantly, members of our forces maintaining order, have been injured. Threats and insults are expressed without restraint, against those elected to represent the Nation and against the Yellow Gilets themselves. This does not resemble what we want to be. Violence must be brought to an end.

This is why, in the concern of restoring peace, we, together with the President of the Republic, have taken the following decisions:

First, three fiscal measures were supposed to enter into force on 1 Jan 2019:
• increasing the tax on carbon, petrol, fuel and diesel;
• aligning the taxation of diesel with petrol; and finally
• for the professionals, aligning individual taxation with taxation of gas-oil of non-road entrepreneurs. This is what we French call the GNR.

However, in light of the request expressed by all my inter-locuteurs during the consultations that took place over the past few days, I am suspending these three fiscal measures for six months. Furthermore, they will not apply until they have been thrashed out by all interested parties. What we want to do in this lapse of time is to identify and implement measures of just and effective accompanying times. If we do not find them, then we are to blame for the consequences.

Next, I heard the concern about technical control measures, which complicate and make this more expensive. In this case too I suspend this measure for a duration of 6 months to find the correct adaptations.

These immediate decisions have to restore peace and serenity in the country.

Such decisions must allow us to engage in a true dialogue on all our concerns that have been expressed over the past weeks.

It is necessary to reflect on the rhythm of the ecological transition, while at the same time embracing and following through with the ambition we have to rid our cities of pollution, fight climate change which threatens first of all the weakest. We have to better accompany the French in making this transition. It is imperative.

The Government has made proposals. Perhaps they are insufficient or unsuitable. Different solutions are needed in the big cities and the countryside. Let us speak about improving them. Let us complete them. I am ready to go for it.

I have asked the ministers in charge to bring together our social partners and local representatives so that together we can study the best ways to help the people that work far from their home. Let us reflect on improving the management of transport, notably outside the cities, for example, by introducing a mobility allowance. Let us mobilize ourselves, with our economic partners, to speed up our investment in housing. Our economic and social partners are ready to tackle these questions. I have full confidence that together with the local representatives, they will find solutions that actually improve the everyday life of the French people.

Finally, I want to open a broad debate on taxes and public spending. We need greater transparency on taxes in France. Our taxes are the highest in Europe, our tax system terribly complex and often criticized for the inequities that would result. Let’s have a conversation about the changes that need to be made to it. Let us bring back clear rules.

First, if the events that have taken place recently have shown one thing, it is that the French do not want tax hikes or new taxes.

Finally, if taxes come down, then spending has to decrease at the same time. Why? Because we do not want our children to inherit these debts; that will be applied from now for the suspension of the taxes that I have just decided. But we will also need a conversation on the just level of our public service in the territories, notably the rural territories. Because, from what we have heard, there is also a cry for more public services.

This dialogue - it is not like any other. There will be of course a dialogue at the national level. But the debate must also take place in the closest proximity to all the French people, all the different French people, on all the territories. We are working to find an appropriate organization, which permits all the French that want to, to express themselves. By mobilizing the institutions that are the natural places for dialogue; by mobilizing trade union and management organizations, the NGOs, the local communities (I am thinking in particular of the town halls), the parliamentarians; by multiplying the ways in which they can participate: it will be necessary to set up local meetings, national conferences centred around a theme, internet sites, filmed debates …

The debate will commence from 15 December and will end on 1 March. It will have to be an outlet for all the concrete translations in the everyday life of our compatriots.

One word on the demonstrations: the right to protest belongs to all the French people. But all French people also have the right to security, to move about, to live normally. The Government does not accept the violence that broke out last Saturday against the forces of order, national monuments, public buildings and shops. Those that broke these places, have broken the assets of the French people. It is the taxes of the French people that will be used to right these damages and to indemnify. I want to say in the clearest manner that those who committed these acts are being looked for and that they will be punished.

If this Saturday is another day of mobilization, it will have to be declared as such and it will have to be a peaceful protest. The Minister of Home Affairs will mobilize all the means necessary to ensure that law and order are respected and I would like to say to our policemen and to our military police, both of you, that you have my complete admiration for your devotion and calm. But please be reassured that we are determined to provide you with all the necessary support.

Now is the time for dialogue. I am convinced that when French people, acting with good will, are put around a table and work seriously, they will find solutions. This is what I propose to do for you.

The Movement of the Yellow Gilets spreads in France, Belgium and Bulgaria