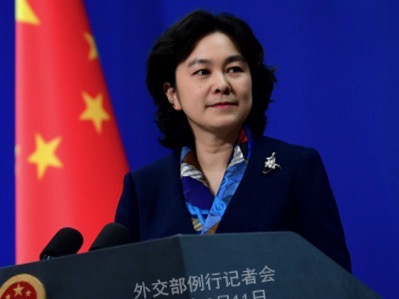 Question: On February 9, the Spokesperson of the Ministry of Foreign Affairs of Turkey criticized China on the situation in Xinjiang and its relevant policies. What is your response?

Hua Chunying: I have noted these very bad remarks made by the Spokesperson of the Ministry of Foreign Affairs of Turkey. The Chinese Embassy in Turkey has already made a response at the earliest time possible, and the Chinese side has made stern representations with the Turkish side.

Before saying anything else, I want to draw your attention to a fact. The Spokesperson of the Turkish Foreign Ministry claimed that "the distinguished folk poet Abdurehim Heyit passed away in his second year of imprisonment". However, the fact is that he is still alive and in good health. I saw videos online yesterday that testify to that. The Turkish side is extremely mistaken and irresponsible in making groundless accusations against China just based on some ridiculous lies that declare a living person dead. We are strongly opposed to that.

First, since 1990s, the "three evil forces" (terrorism, extremism and separatism) in China and abroad have plotted, organized and conducted thousands of violent terrorist attacks in Xinjiang, injuring and killing a great number of innocent people of various ethnic groups. Drawing on the anti-terrorism experience of the international community and based on its realities, the Chinese government has been actively working to counter terrorism and extremism and made notable achievements. People in Xinjiang now have a stronger sense of security, happiness and fulfillment. Recently, diplomatic envoys and representatives from a dozen countries as well as media representatives from countries including Turkey visited Xinjiang. They toured a lot of places, including vocational education and training centers. Their trip enhanced their comprehensive understanding of the economic and social situation in Xinjiang, and they believed that the radiant smile on the faces of local people is the most eloquent response to those rumors. One media representative from Turkey said after the trip that "I clearly saw that China has rolled out and implemented targeted measures in combating terrorism and extremism. They are a series of complementing measures to counter terrorism, accelerate economic development, improve people’s livelihood and strengthen education in Xinjiang. Such a strategy is very wise and deserves to be learned by Turkey and the whole world."

Second, people of all ethnic groups in Xinjiang enjoy full freedom of religious belief in accordance with the law. Xinjiang now has 25,000 venues for religious activities, including mosques, churches and temples. Among these, there are 24,400 mosques and eight religious institutes. Xinjiang has a population of 24.4 million people, among which 13 million are Muslims. That means, on average, 530 Muslims share one mosque. According to available data, Turkey has a population of 82 million people and 90,000 mosques. That means, on average, 910 people in Turkey share one mosque.

Fourth, the cultural rights of people of all ethnic groups in Xinjiang are legally guaranteed and fully respected. 109 religious historical and cultural sites including Kashgar’s Id Kah Mosque are listed as Major Historical and Cultural Sites Protected at the National Level. Currently, on the UNESCO Representative List of the Intangible Cultural Heritage of Humanity are the Art of Xinjiang Uygur Muqam and the Kirgiz Epic of Manas.

Facts speak louder than anything. I believe that for all those who harbor no prejudice nor malicious intentions, they will feel genuinely happy for the solidarity, closeness and harmony enjoyed by the 56 ethnic groups in China. They will not make hostile accusations by fabricating lies.

At last, I want to say that Turkey is also a multi-ethnic country facing the threats posed by terrorism. If it adopts double standards on counter-terrorism, it will only end up hurting itself as well as others. We hope that the Turkish side could make unbiased and impartial judgments, correctly view and understand the relevant policies and efforts made by the Chinese side and take concrete actions to promote mutual trust and cooperation between China and Turkey.