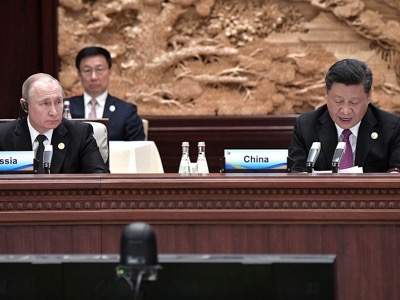 It is obvious that ensuring stable and sustained economic growth and strengthening comprehensive links between countries and integration associations on the Eurasian subcontinent requires an advanced transport, energy and telecommunications infrastructure, as President Xi Jinping and Ms Lagarde have just said.

I should note that Russia is currently implementing comprehensive national projects, which cover major sectors crucial for dynamic economic development. Most significantly, we allocate resources to infrastructure programmes worth hundreds of billion dollars in investment.

The implementation of the long-term tasks we set in the infrastructure development area will undoubtedly have a great synergistic effect – hopefully, not only for Russia but for the entire Eurasian region as well.

As regards the transport infrastructure, its modernisation and expansion is Russia’s major priority. The Safe and Quality Roads national project will receive some 4.3 trillion rubles until 2024 (which is 4.8% of the GDP and amounts to about $80 billion). We will also allocate 6.35 trillion rubles for a comprehensive programme for developing trunk road infrastructure (6.3% of the GDP, or slightly more than $130 billion).

We are making consistent efforts to modernise the Trans-Siberian Railway and the Baikal–Amur Mainline, which connect Russia’s European part with its Far East. We plan to raise their capacity 1.5-fold and increase the volume of annually transported cargo to 210 million tonnes by 2025.

We are paying particular attention to the development of the Northern Sea Route and considering the opportunity to connect it to China’s Maritime Silk Road and thus create a global and competitive route that will connect Northeast Asia, East Asia and Southeast Asia with Europe.

Such an ambitious project implies close cooperation between Eurasian countries in boosting cargo transportation as well as constructing port terminals and logistics centres. We invite the countries present here to join in its implementation.

The development of the International North–South Transport Corridor of over 7,000 km offers new prospects as well. It will include establishing railway and road transportation, which will allow for a considerable growth of cargo traffic from South Asia through Iran, Azerbaijan and Russia to Europe.

As regards improving the Eurasian transport infrastructure, Russia is closely cooperating with its partners in the Shanghai Cooperation Organisation, which is implementing the Agreement on Creating Favourable Conditions for International Road Transportation. In accordance with the agreement, six new routes will be launched next year, including the Western Europe – Western China transit corridor that will connect the Yellow Sea ports of the People’s Republic of China with ports in Russia’s Leningrad Region.

Therefore, our aim is to develop Russia’s nationwide transportation network with a view to its integration with Eurasian countries’ transportation arteries.

Another fundamentally important area of cooperation to provide interconnection in the Eurasian continent is creating a common energy infrastructure. As you may know, Russia is taking active efforts to expand the oil and gas pipeline trans-border network. The construction of the Power of Siberia natural gas pipeline is in full swing to provide safe and uninterrupted deliveries of natural gas to China and the entire Asia-Pacific region. The construction of gas pipelines in Russia’s European part is nearing completion: those are the Nord Stream pipeline laid along the bottom of the Baltic Sea and the Turkish Stream along the bottom of the Black Sea, which aim to enhance Europe’s energy security.

Russia is also building capacity to produce and export liquefied natural gas. Last year, our LNG exports grew by over 70 percent and amounted to almost 27 billion cubic metres. Within the next 20 years, we expect this volume to reach 100 billion cubic metres. Work will be implemented to build new plants in Russia’s northern territories – Yamal LNG and Arctic LNG. We are considering the opportunity to expand the large-scale Sakhalin-2 oil and gas development project in Russia’s Far East.

We believe that all these oil and gas projects are making a considerable contribution to boosting energy security in the entire Eurasian continent and creating a large Eurasian energy space.

Finally, the third major aspect of the Eurasian infrastructure system is digital networks and telecommunications.

Russia is going through a process of forming an information society, where digital solutions are stimulating economic competitiveness, GDP growth, and people’s quality of life.

Russia is among the top ten countries in terms of broadband Internet access. In the coming year, we plan to begin using 5G networks. Together with the Eurasian Economic Union member states, Russia is introducing universal standards of information exchange and protection and building a digital space. I believe that in the long term, we will succeed in creating such a space across the entire Eurasian continent and establishing coordinated rules for online trade.

We initiated the development of the APEC Internet and Digital Economy Roadmap. We are closely cooperating with ASEAN member states in the issues of information and communication technology’s secure use.

Russia is promoting a number of large-scale initiatives in the UN, SCO, BRICS and at East Asia summits related to exchanging experience in state oversight of the digital sector and harmonisation of national strategies of developing technology markets of the future.

In other words, we advocate joining all states’ efforts with the aim of building an open digital space and a unified telecommunications system.

Russia is committed to active joint work with all interested partners in seeking new growth drivers, boosting relations in the Eurasian continent, and achieving many other common goals. I am confident that by taking joint efforts we will succeed for the benefit of our nations and all Eurasian states.

Thank you for your attention.

Source : “Contribution of Vladimir Putin to the 2nd Forum of the Silk Road”, by Vladimir Putin, Voltaire Network, 27 April 2019, www.voltairenet.org/article206431.html

Source : “Contribution of Vladimir Putin to the 2nd Forum of the Silk Road”, by Vladimir Putin, Voltaire Network, 27 April 2019, www.voltairenet.org/article206431.html